This fall, the Hoffman Gallery at Lewis & Clark will debut a major collection of new art from some of the Pacific Northwest’s most influential contemporary artists.

Opening September 7, 2011, the exhibition will feature the work of 20 past fellows of the Bonnie Bronson Fund, including Christine Bourdette, David Eckard, and Lucinda Parker. Bonnie Bronson Fellows: 20 Years is the first gallery event to bring these artists together in one exhibition.

The Lewis & Clark exhibition is the centerpiece of a multi-part tribute to the legacy of Bonnie Bronson, a powerful force in the regional art community who died in a climbing accident in 1990. Throughout the fall, affiliated exhibitions will take place across Portland.

Linda Tesner, director of the Hoffman Gallery, said the exhibition of new and retrospective work will offer art enthusiasts a rare look at the progression of artistry in the Pacific Northwest.

“No art or artist exists in a vacuum; the way art history scholarship evolves is through the examination of work over time,” Tesner said. “Examining regional trends over an extended period, or an artist’s work over decades, is a way of ascertaining how the visual art intersects and overlaps other cultural signifiers—politics, literature, and popular culture.”

Preview some works from Bonnie Bronson Fellows: 20 Years in the slideshow below. 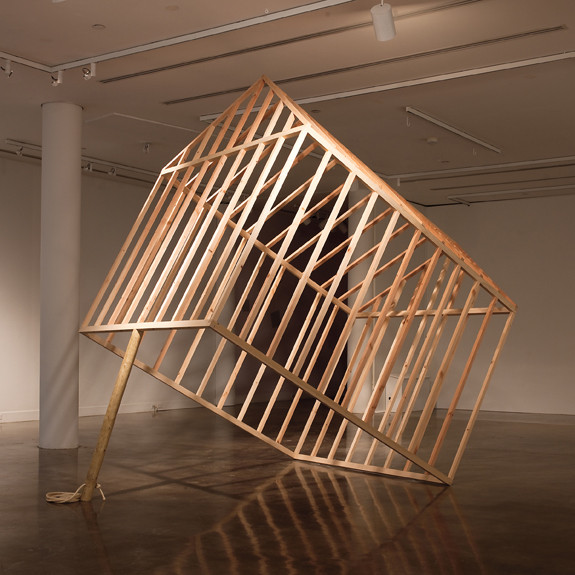 Bonnie Bronson (1940-1990) was an important sculptor and member of the Pacific Northwest arts community. Bronson’s accomplishments included enamel on steel sculpture, welded and painted steel collages, painting and fabric design, as well as video production, and gardening as an art form.

As a young female sculptor working with heavy metals, Bronson was a pioneer in her field, working with materials and using typically male-dominated industrial processes. Professional colleagues, friends, and family felt her impact on the art world should be measured by how it opened new territory for other artists.

As a result, following Bronson’s passing and in celebration of her life and career, her family and friends established the Bonnie Bronson Fund. Since 1992, the Fund has awarded an annual fellowship to a regional artist.

Hoffman Gallery director Linda Tesner said the Fund not only recognizes outstanding artists making significant contributions to the Pacific Northwest cultural scene, but artists who are committed to arts education in the community.

“Each fellow has been selected because of their dedication to their studio practice and some commitment on their part to give back to the community,” Tesner said. “For many fellows, this means that they are teachers. It is virtually a given that the life of a teacher is incompatible with a studio practice—still, these artists make the Herculean accomplishment of being dedicated teachers as well as pursuing their creative impulses with great commitment to their own artistic growth.”

An invaluable asset to the Pacific Northwest art community

The prestige, longevity, and origin of the Bonnie Bronson Fund fellowship program make it a rare and notable asset in the Pacific Northwest artistic community, according to Tesner.

The exhibitions throughout Portland this fall will deepen the community’s awareness of Bronson’s important legacy and the role of the Fellows in shaping contemporary art.

“Collectively, the catalog and concurrent exhibitions at these major Portland arts venues will highlight significant contemporary artists of our region and tell the story of how an important regional collection has been built,” said Christine Bourdette, the first Bronson Fellow and current chair of the Bonnie Bronson Fellowship. “This is a compelling chapter in the history of Pacific Northwest visual art.”

Affiliated exhibitions will take place at galleries throughout Portland this fall.

The Museum will honor the 20th anniversary of the Bonnie Bronson Fund by exhibiting three Bonnie Bronson sculptures from the Museum’s permanent collection in the Northwest Galleries on the fourth floor of the Hoffman Wing.

University of Oregon in Portland

David Eckard: White Box Deployment (September 20-November 12, 2011)
The White Box at the University of Oregon in Portland will present the work of 2010 Bronson Fellow David Eckard. The gallery is located at 24 NW First Avenue, Portland; the gallery is open noon to 6 p.m. Tuesday through Saturday.

From September 7 to December 11, 2011, the Ronna and Eric Hoffman Gallery at Lewis & Clark will display work by the 20 fellows of the Bonnie Bronson Fund:

The Hoffman Gallery will also host the following public events: