Lewis & Clark’s majestic organ, a mainstay in the musical life of the college, turns 40 this year.

It’s been compared to a chandelier and an ice cream cone. The ranks of gleaming pipes suspended from Agnes Flanagan Chapel’s ceiling belong to the Casavant organ, which turns 40 in 2011. “It’s great fun to watch people wander into the chapel for the first time and look up in amazement at what is above them,” says Lee Garrett, professor emeritus of music and curator of the organ.

The World’s Only Circular Pipe Organ

The organ fits Agnes Flanagan Chapel’s architecture so perfectly, it’s hard to believe it hasn’t always been there. The original budget included a pipe organ, but building costs prevented it from being included in time for the chapel’s 1969 dedication. Shortly thereafter, convinced that an organ was an important investment, longtime Lewis & Clark supporters Agnes and George Flanagan stepped forward, allowing the college to commission renowned organ builder Lawrence “Larry” Phelps to design an instrument. 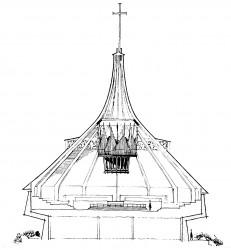 “An organ’s appearance and pipes are customized for the visual and acoustical properties of the room where it’s housed,” says Garrett. Paul Thiry, the chapel’s architect (who had also designed Watzek Library), envisioned a pipe organ suspended from the ceiling, but designing an organ in the round presented an acoustic and architectural challenge. Garrett says many organ builders weren’t interested in the job, but “Larry loved challenges.”

“That Lewis & Clark was able to commission a Casavant under Phelps’ leadership was fortuitous and timely,” says Garrett. “He had an international reputation for his approach to fine organ building, applying principles of historical European practices to contemporary American instruments. The project gained immediate attention among organ builders and players.”

Lewis & Clark’s Casavant was dedicated on Easter Sunday, 1971, and named to honor L. Stanley Glarum, choral director at Lewis & Clark from 1947 to 1975. It is the only circular pipe organ in existence. The chapel’s conical ceiling makes the Casavant look smaller and closer to the floor than it really is. Garrett, in his curatorial role, ascends to the ceiling via electric lift when the organ pipes need maintenance or repair. It’s possible to stand on top of the basket, the structure that holds the circular ranks of pipes suspended above the chapel floor. Seeing the organ from this angle, as few others do, Garrett emphasizes its impressive size and elevation. “There’s enough room to park a car up there—and it’s a long way down.” 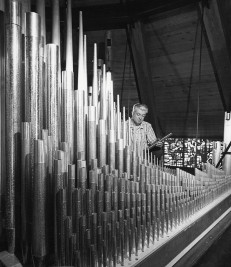 Lewis & Clark’s Casavant has played an important role in campus life. Its quality and versatility have enriched students’ musical educations, launching many on distinguished careers. The College of Arts and Sciences also has a major endowed scholarship for organ studies. “An organ this size invites a creative, disciplined imagination to discover variations on musical conventions,” Garrett says. “Our organ students have won significant awards for graduate study, including Fulbright Fellowships and Danforth grants. Alumni teach and perform in many settings, both here in the States and abroad in countries such as Germany and Japan.”

The instrument has drawn renowned musicians to campus. “Having such an outstanding organ has attracted composers and performers of international fame,” says Reinhard Pauly, professor emeritus of music, who chaired the music department when the organ was installed. One of these noteworthy musicians was Maurice Duruflé, an esteemed organist and composer known for his Requiem and other choral works. “In the early 1970s, the Lewis & Clark choir performed the Requiem under his direction,” Pauly says. “His wife, Marie-Madeleine Duruflé, gave an organ recital during their residence at the college.”

The organ’s reputation has attracted students from other colleges in the area and even other countries. Andrew Yip BA ’10 came from Hong Kong, where his organ teacher knew of Lewis & Clark, its Casavant, and Lee Garrett. Yip says playing the organ is “as much a scientific pursuit as an art—discipline and leisure at the same time. The contemplative nights of making music in the chapel are among the best times I experienced at Lewis & Clark.” 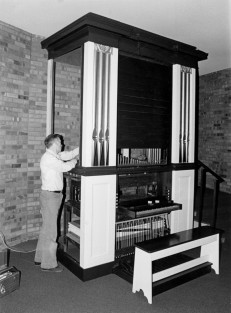 An Investment for the Future

Lee Garrett and others at Lewis & Clark have nurtured the Casavant organ throughout its 40 years. This takes effort: the instrument has more than 4,000 pipes, ranging in size from an inch long and a pencil’s width in diameter to more than 20 feet long and nearly 18 inches wide. The organist sits at a console in the balcony that rotates to face the choir, choir director, or audience.

When it was installed in 1971, the organ cost $165,000, but Garrett says today’s replacement costs would approach $2 million. Maintaining it is a year-round task. “Each semester, we devote several days to tuning and maintenance,” Garrett says. A winter power outage or summer heat wave can put the Casavant out of tune. Garrett is on campus often during winter holidays, when the organ is used in concerts, and spring recital season, when students perform.

The recent renovations to Agnes Flanagan Chapel included acoustical renovations. “Previously, the chapel’s acoustics favored the organ more than speakers or performers at the front of the room,” Garrett says. “We’re assessing how to balance those sometimes-competing needs more effectively.”

The organ, named for a beloved choir director, continues to fulfill one of its original purposes: accompanying Lewis & Clark’s choirs. “Under the fine direction of Katherine FitzGibbon, our director of choral music, our choirs are thriving,” Garrett says. “We look forward to collaborations with organ and choir such as many alumni remember.”

As the organ turns 40, the Lewis & Clark community can look forward to many more performances. “Our Casavant has a long life expectancy,” says Garrett. “We are careful about maintaining it, so it should last for a very long time.” For music lovers and friends of Lewis & Clark, that’s cause for celebration.

Genevieve J. Long is a Portland freelance writer and editor.