Morocco is a place to be savored with the senses—the rousing sound of the morning call to prayer, the intricate beauty of the zellige tile work adorning the architecture, the sweet taste of mint tea, the pungent smell of spices in the souk or marketplace.

It is also a place that lends itself to examination through scholarship. Civilization in Morocco dates back to prehistoric times and has been influenced by Roman, Berber, and Arab cultures. As a result, Morocco is rich in topics for study—from language, religion, and architecture to colonialism, globalization, and gender issues.

The Morocco venture has been a long time coming. Lewis & Clark’s overseas study programs in the Middle East flourished in the late 1960s and 1970s, including excursions to Iran and Afghanistan. But the college had not had a presence in the region since the mid-1990s in Turkey.

“The Middle East is such a pivotal area,” says Larry Meyers, director of Overseas and Off-Campus Programs. “We want to move away from stereotypes and xenophobia, so it’s important to have students experiencing and exploring the region’s culture and history.”

Kosansky says he had such a trip in mind even before being hired by Lewis & Clark in 2004. He had been a graduate student in Morocco, including stints as a Fulbright Fellow, pursuing research about the country’s once-sizeable Jewish community. On campus, he connected with Paul Powers, associate professor of religious studies and a specialist in Islam, who had traveled in the region but never to Morocco. After getting the go-ahead from the college, the pair made exploratory trips in 2009 and 2010.

“I think for everyone in the group, Morocco was a really powerful experience,” says Samantha Stein BA ’11, a sociology/anthropology major from Minnesota. “I don’t think you can really understand yourself and where you come from until you’re put in an environment that’s so completely different.”

Kosansky and Powers chose to craft the program according to their own specifications, passing over more obvious destinations such as the capital, Rabat (also home of the country’s largest university and an array of overseas study programs), and the country’s largest city, Casablanca. Instead, they elected to split the program’s time between the cities of Marrakesh and Fez.

Setting up the program in these cities took some extra planning, but Kosansky and Powers felt they could offer students a more distinctive experience by going off the beaten track. 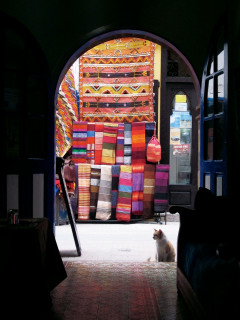 “We wanted a program that was more adventurous,” Powers says. “We saw Marrakesh and Fez as the best options—they’re just fascinating, remarkable cities. I’ve traveled a lot, and I’ve seen a lot of interesting, ancient places. But I was blown away by these cities.”

Before making the journey, participants took a crash course in Arabic during the fall semester. Once they arrived in Morocco in January, they started intensive four-hour-a-day classes in Darija, the distinctive form of Arabic used in the country. They also took courses—taught by Kosansky and local faculty—that addressed North African cities, Moroccan modernity, and issues of gender in Moroccan society.

During the program, students lived with host families in both Marrakesh (for one month) and Fez (for two months). Staying with local families provided students with a rich, authentic experience of Moroccan life. It also gave them ample time to explore their surroundings.

The students took field trips to numerous historical sites, such as the ruins of the 14th-century Merenid Tombs on a hillside overlooking Fez, as well as nature areas, such as the Cedar Forest in the Atlas Mountains, where they got to feed bananas to Barbary macaques.

All the students took time to adapt to the rhythms of life in Morocco, where notions of time and space and privacy and cleanliness are different from what they experienced growing up in the United States.

“You have to get used to feeling like you’re always standing in sand, where the things you presume to be solid are not necessarily solid,” Kosansky says. “Larry [Meyers] told me that students who can deal with ambiguity do better—and that turned out to be true.” 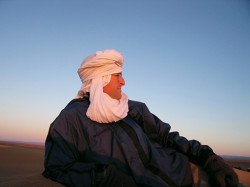 A number of students noted half-jokingly that one of the toughest things to get used to was the overwhelming hospitality of their hosts, who would ply them with home-cooked food. “They would want you to eat and eat,” says Elle Olson ’12, a sociology/anthropology major from California. “Finally you would say, ‘No, I’m full—al-hamdulilah!’ (Thanks be to God). They would come right back with, ‘You ate nothing! What? You don’t like the food?’ The people were wonderful and the food is incredible, but I’ve never been so full in my life.”

On a more serious note, students found that spending time abroad enabled them to reflect on what defines American culture and values, from the way we treat our senior citizens to our notions about the individual and collective good. “Living in Morocco,” Olson says, “has shown me not only the culture and the language and the wonders of life here, but it has really opened my eyes to the way we live in America.”

An unexpected facet of the program was its coincidence with Arab Spring, the wave of pro-democracy protests that swept across the region from Tunisia to Egypt and beyond. Morocco, a constitutional monarchy with an elected parliament and more democratic institutions and freedoms than many countries in the region, saw relatively small-scale demonstrations. But it was impossible for Lewis & Clark students not to get swept up in the history-making events—even if most of what they experienced was secondhand through people they met or news they read.

“It was quite astounding to be in the region where these revolutions were happening,” Kosansky says, adding that students were told in no uncertain terms to stay away from the protests to ensure their safety. 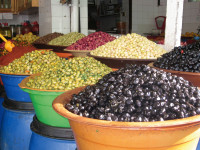 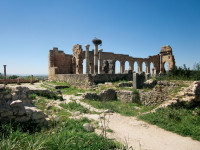 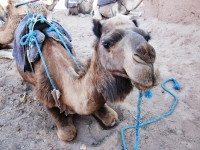 Anne Gorman ’12, a religious studies major, wrote about the political situation as it was unfolding on her blog.

“Only the riots in Marrakesh got out of hand,” she reported in a blog posting shortly after the events that led to the country’s February 20 Movement for Change. “It was interesting for us to see news reports of rioting in places that we had recently been, like the looting of the McDonald’s at the main plaza. (This is the place to be on weekend evenings, and they make a pretty delicious Toblerone McFlurry.)” She continued to write: “Overall, this is pretty mild. In fact, peaceful and controlled demonstrations are the goal.”

Certainly, Morocco is an experience that will live on in the memories of all the participants. A number of them are already planning return visits, and some chose to remain in the country for the summer.

A contingent of students led by Samantha Stein stayed in Casablanca to start a nonprofit called Tools for Tolerance. Stein received a $10,000 grant from 100 Projects for Peace (an initiative funded by philanthropist Kathryn Wasserman Davis) to establish a human rights cultural center in Casablanca. All told, 10 Lewis & Clark students from overseas study programs in Africa and Europe participated, working to organize the center and facilitate workshops with local educators and youth.

Stein, who plans to pursues a career in international development or attend graduate school in anthropology, hopes Tools for Tolerance will continue to make an impact both in Morocco and at Lewis & Clark. 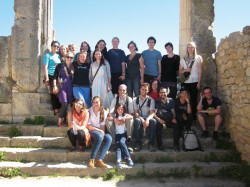 In the spring of 2013, Paul Powers plans to travel with the next group of students ready to discover Morocco. In addition to leading the program, he hopes to pursue some of his own research in Islamic law while abroad.

“Taking 20 students to another country is work,” he says. “Fortunately, the students who choose this sort of program tend to self-select—they’re strong, independent, and ready to make the most of the opportunity.”

Both Kosansky and Powers hope the program will help students develop a deeper understanding and appreciation of the multifaceted culture of Morocco.

“They can take pride in having come to know so much about Morocco—the language, the history, the day-to-day life,” Kosansky says. “At the same time, they’ve only touched the surface. I just hope they have a greater sense of the world of new experiences and possibilities.”

This story originally appeared in the Fall 2011 issue of the Chronicle magazine. Romel Hernandez is a freelance writer in Portland. Photography by Johanna Dooley ’13, Jade Lansing ’12, and Julie Hastings.