The Pioneer football team enjoys its best season in 35 years.

With just over seven minutes on the clock, Lewis & Clark’s football team trailed conference rival Pacific Lutheran by five points. History has proven that defeating Pacific Lutheran is rarely an easy task. The Pioneers had recorded just one victory in their previous 27 meetings with the Lutes and had lost 16 in a row.

The Pioneers had fallen behind early and trailed by two touchdowns going into the fourth quarter. But in the game’s final minutes—aided by touchdowns from senior Joevonte Mayes and first-year wide receiver Curtis Shirley—the Pioneers took home a 34-32 win.

With this victory, Lewis & Clark’s football team cemented its first seven-game winning streak since 1966. In fact, the team’s seven victories matched the total number of wins in the previous six seasons, a remarkable turnaround by any measure.

Brandis Piper CAS ’12, a history major from Hillsboro, who played in all 36 games of his four-year career as a wide receiver, relishes this season’s outcome but also sees it as a bellwether for the future.

“By the end of the season, everybody on the team knew we could win and trusted the guy next to him,” says Piper. He notes that this wasn’t always true. In his first season, with just 40 players suited up, the Pioneers struggled and won just one game. “It’s a different culture now; no one’s okay with losing and everyone believes we can win—every game.”

Win every game? This year’s team did what only five others in the 66-year history of football managed to accomplish on Palatine Hill: they won their first seven games, matching the school’s fifth-longest winning streak, before losing out to conference foes Willamette and Linfield in the final two games. Lewis & Clark was in the race for the Northwest Conference championship right up until the last game of the season. 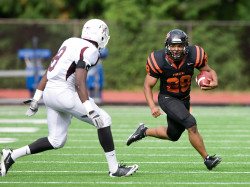 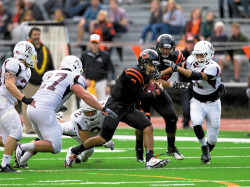 Chris Sulages, in his fifth year as head football coach, isn’t a man who likes to make comparisons with the past. But he, too, sees lots of positive energy coming from this season’s turnaround. “Now our players grasp the real meaning of the competition part of the game,” he says. “They are in an environment where they expect to succeed. It is really rewarding in that way.”

Sulages also acknowledges the supportive role of Lewis & Clark fans. “It’s nice to have the whole college community rallying around the team and what’s happening,” he says. “It’s a great feeling for the team, and they all appreciate it—from our new guys right up to our 18 seniors.”

Crowds attending the four home games in venerable Griswold Stadium this past fall were the largest in many years with a healthy mix of students, faculty, administrators, and trustees—plus an ever-increasing number of alumni who came back to join the fun.

From 1996 to 2009, Lewis & Clark won only 24 games, and in 2005, it canceled its last five contests due to low numbers. Clark Yeager, a veteran of more than 40 years in college sports administration, is in his sixth season as director of physical education and athletics. He was one of several campus leaders given the responsibility for creating an environment of success for all varsity sports programs, not just football, consistent with the quality academic experience at Lewis & Clark.

In 2009, the Board of Trustees unanimously reaffirmed its commitment to athletics. Yeager sees the football team’s success as a symbolic affirmation of the board’s action. Other varsity teams have continued the trend. In recent years, for example, the women’s cross country team has enjoyed two conference championships and two high finishes in NCAA Division III Western regionals, and the women’s basketball team reached the NCAA playoffs last winter after its conference championship. 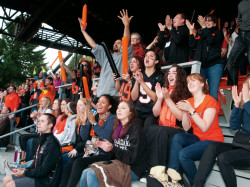 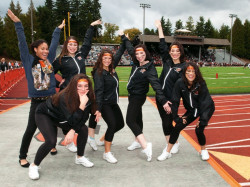 “Our success indicates what can be done,” Yeager says. “It puts some reality to the hopes and dreams and potential that exist.”

More than 300 student-athletes, about 15 percent of the undergraduate student body, now compete in one or more of 19 varsity sports.

The 2011 Pioneer football team will long be remembered as one of the college’s finest. Older alumni will no doubt be reminded of the Joe Huston era. Huston was one of Lewis & Clark’s most successful football coaches. During his 18-year run, his teams went 100-52-7, endured only five losing seasons, won or shared six conference championships, and twice emerged undefeated (in 1950 and 1963).

At Huston’s memorial service in 1974, then-president John R. Howard said that Huston’s teams were ones “that gave this college a vision of excellence in achievement that never has been relinquished.”

Fast-forward to 2011. The current iteration of Pioneer football, along with the other sports teams donning the orange and black, are proof that Lewis & Clark’s vision of excellence in athletic achievement is alive and well.

Photos by Will Crew and Brian Foulkes.