Are forests really about the trees? Peter Kennedy digs for answers.

As a cold, gray rain fell in sheets, Laura Bogar CAS ’12 scraped through sand and gravel with her fingers alongside another student and Assistant Professor of Biology Peter Kennedy. Bogar’s thesis project called for her to sample young tendrils of root and soil around birch and alder trees. The bedraggled trio had driven eight hours and camped overnight to end up alongside a tributary of the Salmon River in western Idaho, where a stand of alder and birch trees grew.

“We were all digging around in the dirt like maniacs,” says Bogar. With the river running high against its banks, they had to dig with one hand while holding on with the other to keep from falling in. It seemed obvious to Bogar that her plan required a revision—and she looked to Kennedy to call for it. But he never did. He just kept going, unfazed and upbeat. Bogar says his attitude kept her going too. “Peter will dig until his hands bleed,” she says now.

What Kennedy and his students were rooting for were fungi of a kind that live on tree roots and are known as ectomycorrhizas (ek-toe-mye-koe-rye-zas), or ECMs. Above ground, they appear humbly in the form of mushrooms, and on rootlets they are just barely detectable. Below ground, however, their mass and extent are often gargantuan. Their microscopic threads enmesh the soil and can interlink hundreds of trees at a time. More crucially, these fungi form symbiotic sleeves around root tips, “like socks,” says Kennedy, where they swap nutrients and protection for carbon and broker trees’ relationships to the soil.

“We really don’t know whether the trees are in control or the fungi,” Kennedy says.

Kennedy collected mushrooms with his father as boy on Bainbridge Island, his childhood home near Seattle. Back then, he didn’t know about the mushrooms’ underworld connections with the surrounding trees, of course. Even while studying plant biology as an undergraduate at Evergreen State College, he barely heard anything about their secret role. Working as a research assistant before graduate school, however, Kennedy went to Panama, where he had a chance to walk in the mountains. “I was blown away,” he says. Though he was in a tropical cloud forest beneath a diverse canopy that included oaks, he encountered mushrooms that looked the same as those he saw among the conifers of Olympic National Park. Kennedy became driven to understand what was so standard and essential about this suite of mushrooms.

Kennedy soon learned that nearly every mushroom in a forest is ectomycorrhizal. Biologists refer to them as the “fruiting bodies.” The massive “roots and branches” of the fruit often lurk directly below. According to Kennedy, not only have you likely seen these fruiting bodies, you’ve probably chewed and swallowed one–if you’ve ever enjoyed a morel, chanterelle, porcini, or truffle, for example. Each one is an ECM spore carrier. 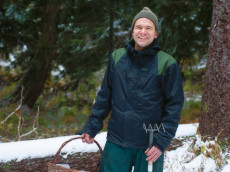 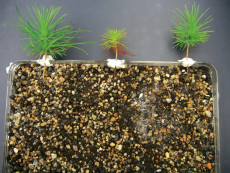 Kennedy is so laid-back in conversation that he can sometimes be hard to hear across a table. His enthusiasm, on the other hand, is obvious—and contagious. His students say he smiles a lot. “I’ve never seen him in a bad mood,” Bogar says. Kennedy carries just a fuzz of hair on his head, which is how he’s cut it since he played intercollegiate soccer. However, the style has turned out to be practical for forest forays and trips abroad, he says. Last summer and fall, Kennedy was in Mexican forests on a Fulbright fellowship, and previously he’s gone as far away for fungi as Borneo.

Depending on the season, Kennedy and his students either collect mushrooms for spores or they collect soil samples. On the soft forest floors where they are usually collecting, they use a hollow-ended sampler to extract “cores.” At two pounds apiece, Kennedy says, their weight adds up—particularly because it takes many cores to map even just one fungus. His students help, of course, but their efforts usually only multiply the number of cores they need to carry back. They try to sample within a reasonable trek of their car.

Students actually are integral to his research, Kennedy says, which could also be deduced from the lists of authors on his publications. Most of the students who spend time in his lab will coauthor at least one paper, he says, and some present their work at conferences. This degree of involvement isn’t unusual at Lewis & Clark. “The undergraduate experience here is very much like grad school,” he says.

Kennedy began researching ECMs as a grad student at the University of California at Berkeley, where he developed what has become a pivotal technique. Previously, researchers had relied on mushrooms to tell them what species of fungi were working below with the nearest tree. In the laboratory of one of Kennedy’s two advisors, Thomas Bruns, Kennedy learned to use DNA fingerprinting to identify microscopic fungal filaments in soil and on tree roots—as well as to compare the amount of each species present in a sample. The technique made it possible to see if quantities rose or fell through competition.

Adjoining his laboratory on the ground floor of Bodine Hall, Kennedy now keeps a “clean room,” where he and his students amplify the trace amounts of DNA they collect from frail root segments and soil. Partly for students, he says, Kennedy has started researching a parallel symbiosis that includes, besides ECMs, bacteria called Frankia. Working with bacteria and the biotechnical tools developed for them, Kennedy says, is good preparation for future careers in biotechnology and medicine.

“Not many doctors would think that taking a class in ecology would be valuable to them,” he says, “but if they want to know about how a species invades the body, I would argue that having a good ecological underpinning would help a lot.” 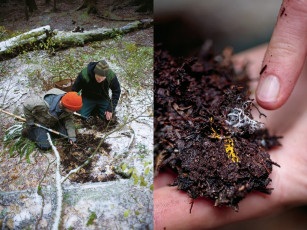 Many trees simply will not grow without an ECM, Kennedy says, and they are more than a little picky about which species they will partner with. So if one ECM can edge out another, he says, it might well change the kind of trees that will succeed in growing nearby. According to Daniel Durall, associate professor of biology at the University of British Columbia, that puts some very big questions on the table, such as what governs the recovery of forests from fire and the maturation of forests in general. If ECMs play a role, Durall says, Kennedy and his students have produced some of the best evidence so far about what the process might look like. In particular, he cites a recent report in the influential research journal PLoS One.

The report builds on Kennedy’s postdoctoral research at Point Reyes National Seashore, north of the Bay Area in California; however, most of the experimenting was done by Logan Higgins BA ’11, who now works in Kennedy’s lab as a technician while she applies for PhD programs. At Point Reyes, Kennedy found that the area’s Bishop pines partner mostly with three ECMs. Crucially, he also found he could rear all three in the lab from their mushroom spores. One of these was an ordinary-looking mushroom called a slippery jack, and the other two were truffles—meaning they grow potato-like underground. The truffles label doesn’t ensure they’re delectable, says Kennedy (he’s tried them).

While he was at Point Reyes, Kennedy observed and ranked how quickly the three species of fungi colonized new turf with their scattered spores. Slippery jack came in first, followed by the truffles. For the PLoS experiments, the goal was to compare the land-grabbing skills of the fungi’s mycelia—their filamentous networks. Kennedy and his students developed a series of time trials and round-robin tournaments in two event categories to test them.

In one event category, the mycelia would have to sprout from a root sleeve, then get to and colonize new roots. The fungus that partnered with the most roots won. In the second category, a dirt arena was inoculated directly with mycelia, which then had only to spread. The winning fungus was the one that spread the most.

The truffle fungus that had been faster to grow from spores was the slower one in both event categories. The performance of slippery jack’s mycelium was less clear-cut, but with respect to claiming roots, it fell into the same pattern: Having been speediest of the three by spore, it was the slowest by mycelium.

Overall, these results suggest just the pattern to be expected of an intense and long-running competition, Kennedy says, which is one suggestive of a competitive trade-off. It appears that ECMs have become so optimized and adapted to squaring off against one another over the course of evolution that they can spread no more by spore without spreading less by mycelium.

“The trade-off is basically: Where are you going to allocate your carbon?” Kennedy says. “Are you going to put it into mushrooms and spores or into mycelium?”

Among trees, Kennedy points out, there appears to be a trade-off between effectiveness in seed dispersal and speed of growth, based on a large body of research. A trade-off between spores and mycelial spread is exactly analogous. Biological competition, he adds, hardly gets any fiercer than what goes down among trees. In the tropics, he says, a thousand species can contend for one parcel of real estate. 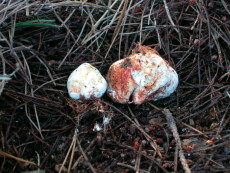 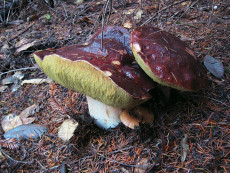 “Peter has connected a formal body of literature, developed in ecology over decades, to mycorrhizal research,” says Anne Pringle, associate professor of organismic and evolutionary biology at Harvard University. “He’s changing our understanding of what happens between a plant and its fungi.”

The observation that no species was the best in both approaches to colonizing—and how each species ranked—mirrors another pattern as well, Kennedy says. At Point Reyes, it appeared that slippery jacks had claimed tree roots the most quickly and over the widest range but that they had been bested easily by the truffles, when and where truffles had shown up. The prowess that truffle mycelia showed in the lab might explain the besting, Kennedy says. Slippery jacks’ spore superiority, meanwhile, could explain their broader yet often fleeting success.

What’s still more interesting about the complementarity of the results in the lab and the observations at Point Reyes, says Kennedy, is this: with the besting of the slippery jacks at Point Reyes, historically, there appeared to have been an arrival of new trees. While Kennedy was there, he had not been able to say that it wasn’t the trees that had brought the truffles as opposed to the reverse. What he and his students most recently saw in the lab at Lewis & Clark, however, distinctly depicts fungi in the driver’s seat. In these experiments, fungi won and lost even when there was no tree to choose between them.

Is Kennedy ready to quit digging then? Of course not. “To my family’s angst, I’m still fascinated by these basic research questions,” says Kennedy. “It’s just really fun to think there’s this major player in these ecosystems that we can’t see most of the time.”

Oliver Baker is a freelance science journalist in Portland.