A native of Washington State, Crist began his career as a chiropractor, then returned to school to earn his baccalaureate degree at George Fox in 1944, his master’s at the University of Iowa in 1945, and his doctorate in sociology at the University of Missouri in 1951. From 1952 until 1965, he taught at Dennison University, where he founded the Family Life Department. During his time at Dennison, he spent a sabbatical year at the Menninger Clinic and for years thereafter, maintained a part-time practice in psychotherapy and marriage counseling.

Crist accepted a tenured position in sociology at Lewis & Clark in 1965. In the company of his first wife, Dorothy Varley Bingham, he led numerous off-campus programs. Crist identified himself as a “learning facilitator” and came to be known for his innovative approaches to teaching. He retired from Lewis & Clark in 1985.

Reared as a Roman Catholic, Crist became a Quaker in the 1940s and was active for years with the American Friends Service Committee. He was an avid photographer, hiker, and nature lover. As a gardener, he was also ahead of his time, practicing and advocating organic techniques since the 1950s.

In 1987, Crist married Margery Frank, the youngest of the three children of Lloyd and Edna Frank, who remembers fondly her years growing up on the Fir Acres estate. Together they shared a love of travel.

Crist is survived by his wife, Marge; his children, Patience, Constance, Peter, and Jonathan; and four grandchildren.

Myers practiced law in Portland for 22 years and was a partner in the firm of Schuler, Rankin, Myers & Walsh. He taught at Lewis & Clark Law School for another 18 years, during which he received the Leo Levenson Award for Teaching Excellence. He retired from the law school in 1990. A member of the Oregon State Board of Bar Examiners for three years, he was the board’s chair in 1968 and served as secretary and chair of the Oregon State Bar Disciplinary Rules Committee.

He loved the Pacific Northwest and enjoyed camping, fishing, hiking, sailing, golf, and spending time with his family. Survivors include his wife, Annette; sons Doug and Eric; daughter Enid Nielsen; two grandsons; and one great-grandson. 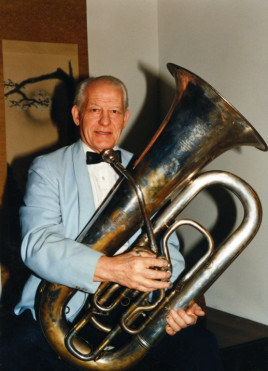 John Keil Richards BS ’46, professor emeritus of music, died July 26, 2011, at age 93, in his Portland home after a brief illness. Richards was an accomplished musician, teacher, and mentor, who was revered for his ability to nurture the best qualities in each of his students.

Richards earned his master’s degree in music from the University of Southern California in 1947 and his doctorate at the Philadelphia Conservatory of Music in 1955.

An outstanding scholar and director, he taught in Lewis & Clark’s music department from 1947 to 1962 and then in the education department until his retirement in 1985. He also chaired the music department, directed summer sessions and teacher training for the deaf, and served as associate dean of the faculty.

Richards served as Lewis & Clark’s director of bands for many years, conducted the Portland Symphonic Band for nearly three decades, and was the principal tuba player with the Oregon Symphony Orchestra for 52 years. “Dr. John,” as he was known to the Metropolitan Youth Symphony, also conducted MYS from 1994 to 2009.

Richards organized and conducted A Tuba Christmas, a favorite Portland holiday ritual. He never let a little wet weather dampen the crowd’s spirits, as more than 200 tuba, sousaphone, baritone, and euphonium players would take over Pioneer Courthouse Square in downtown Portland. Many called the group’s rendition of Silent Night magical.

Richards devoted countless hours to preserving the musical history of Oregon’s Aurora Colony, a utopian Christian community that thrived from 1856 to 1921. Often the source material was sketchy; however, as Richards once said, “If you have the musical skeleton and are skilled in music theory, you know what the next note may be.”

Robertson was a musician, a teacher, and a realtor, who saw a connection between all three careers: guiding people toward a good experience, whether it be listening to music, learning new things, or finding the perfect home.

After serving in the U.S. Navy in World War II, Robertson pursued a career in music. He was the longtime band director at Beaverton High School, where he developed the music department into a strong and competitive program.

After earning a master’s degree in music at Lewis & Clark and doing graduate work at Standford University, he was selected as an administrator of the new Tongue Point Job Corps program near Astoria. In 1966, he was recruited to teach at Lewis & Clark, where he remained for 11 years.

Robertson was active in the Portland Rose Festival, first as a volunteer then as a director for 35 years. He was chair of the Starlight Parade, the Festival of Bands, and the Stage Band Classic. On two occasions, he received the Rose Festival’s Distinguished Service Award. He later transitioned to a career in real estate with his wife, Barbara Parry Robertson BS ’57, M.A.T. ’77, who had previously worked as an art teacher in Portland. Over the course of his career, he served as president of both the Washington County Association of Realtors and the Oregon Association of Realtors.