The women’s basketball team, ranked in the top 10 nationally, advances further than ever before in the NCAA Division III Tournament.

by Bobbie Hasselbring | Photography by Will Crew

Screaming fans packed the stands. Facing off: longtime rivals, the Lewis & Clark Pioneers, ranked seventh in the nation, and the third-ranked George Fox Bruins. At stake: a slot in the legendary Sweet 16—and a chance to earn a spot among the final four teams of the NCAA Women’s Basketball Division III National Tournament.

The tension was electric. Both teams hustled, jumped, scrambled, and shot with focus and intensity. The din in the gymnasium shook the rafters.

Everything about the scene was perfect—except the final score, a two-point loss for Lewis & Clark. Yet even that result could not tarnish the luster of a season in which the Pioneers enjoyed their furthest-ever advance in the NCAA Tournament and demonstrated beyond any doubt that they had entered the ranks of women’s basketball powerhouses. 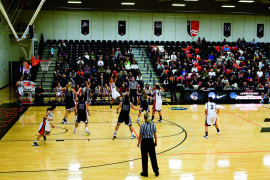 The very fact that Lewis & Clark was playing George Fox in the second round of the national tournament spoke volumes. The Pioneers entered the competition with an overall winning record of 25-3. Throughout the entire season, the team’s only losses had been to George Fox.

After a bruising first half, the teams were tied 17-17. Throughout the second half, the tension was palpable with players trading basket for basket.

With 1:23 left in the game, Lewis & Clark senior Megan Spence CAS ’12 hit a three-point shot off the backboard for her 1,000th career point, putting the Pioneers in the lead and bringing them whisper-close to victory—48-47.

George Fox responded with a quick three for a 52-50 edge.

Then, with four seconds on the clock, time stood still. Lewis & Clark’s Katie Anderson CAS ’14 raced toward the basket and fired. The three-pointer banked hard off the glass and swished through the basket.

But it was too late. The referee waved off the winning shot. A half a second separated the Pioneers from their hard-won victory. Stunned and heartbroken, the Pioneers shook hands with the Bruins and headed for the locker room.

Although the Pioneers didn’t enjoy the Cinderella finish they had hoped for, no one can dispute that they had a successful season. “They went after their goal of being in the NCAA championship with 100 percent intensity,” says Juli Fulks, head women’s basketball coach. “They knew this game was going to be either one of their best athletic experiences or one of their most painful. They were willing to take that chance.”

“We showed our character as a team and demonstrated the fierce competitiveness we’re capable of,” says starting forward Neva Hauser CAS ’12. “Being able to let go of something you worked so hard for is no easy task, but I wouldn’t trade the experience for anything.”

Margaret Dowling CAS ’12, who played her final career game against George Fox, was philosophical, “Both teams were talented, both played their hearts out, and both teams probably deserved to win, but in sports one team loses and one wins. Every second of that game was a nail biter, and it’s taught me to appreciate every second of every experience.” 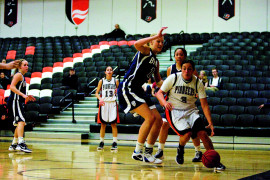 The Pioneer women’s basketball team has traveled a long road to becoming NCAA championship contenders. When Coach Fulks arrived eight years ago, the team’s record was 5-20 overall and 1-16 in conference play. Fulks says the biggest hurdle was creating a culture of winning.

“It’s all about building confidence and changing to a mindset that says we are a better team now and we’re going to behave like a better team,” she says.

Last year, she says the players “turned the corner” and believed they could win. “Now it doesn’t matter who they are playing or on whose floor,” says Fulks. “They believe they are the best team and have the maturity not to get stuck with setbacks. They realize that every day is a new day, and they’ve taught the younger players that too.”

Working hard and playing well together are characteristics the coaches teach. “Teamwork is something they’ll use throughout their lives,” says Fulks. “They’re hardworking and selfless. They want to contribute however they can. They’re excited when their teammates are successful, and they take pride in the group’s success.”

Senior Neva Hauser, who’s headed to graduate school next year, has learned “to work through exhaustion and celebrate the beauty of bringing different personalities together as a single force.” 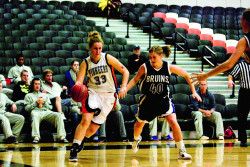 Time management is a big lesson for the players too. In addition to the rigors of their academic load, they practice together two to three hours a day, six days a week for five months.

For biology major Daron Dean CAS ’13, balancing academics and athletics sometimes means sacrificing sleep. “Plenty of nights we would get back from games late and face homework. That means not much sleep before getting up and going to class. But it’s all worth being part of a team like this.”

Junior Kristina Williams CAS ’13 says her experience as a Pioneer has taught her “to commit and put it all out there. Never leave any of your abilities behind.”

This year, the Pioneers came so close to going all the way. What about next year?

Williams, who recently earned a spot on the D3Hoops.com All-West Region Second Team and will be a returning senior for the Pioneers, isn’t worried. “Some key players will graduate this year, so we’ll be a different team,” she acknowledges. “But different doesn’t mean we’ll step backward. We know how to be a success.”