For the second consecutive year, the Lewis & Clark Student-Athlete Advisory Committee (SAAC) made a significant monetary donation to the Special Olympics of Multnomah County in honor of its continued partnership with the organization. The Pioneers, one of the first NCAA Division III athletics departments to partner with the Special Olympics, raised over $3,000 hosting events throughout the year.

“By inviting Special Olympic athletes and staff to our campus for games and barbecues, we have not only given L&C athletes the opportunity to share their love for their sport with other athletes, but have offered a chance to step out of one’s comfort zone and experience athletes overcoming obstacles in order to participate in an activity they love,” said SAAC cochair Margaret Dowling BA ’12.

Student-athletes from all 19 Pioneer varsity sports participated in the annual Northwest Conference Coin Drive this spring, which raised $2,700 in a single day. The Pioneers also hosted barbecues at various sporting events throughout the year. 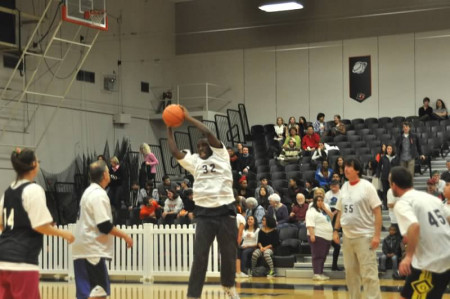 The Student-Athlete Advisory Committee hosted a Special Olympics basketball game during the 2011-12 season.

“Through their dedicated efforts, the L&C student-athletes have helped to support the local program. The money will go to paying for practice facilities, new sports equipment, and lodging and transportation for competition,” said Kelly Coates, field director of Special Olympics Oregon.

Zibby Pillote ’14 contributed to this story.