As the professor of biology explains, “While I was in bed, a huge spider crawled across the hotel ceiling. I’m a bit arachnophobic, so I was working up the courage to deal with the spider when a tiny gecko came out on the ceiling too. The gecko and the spider had an upside-down battle right there above me. The gecko won without difficulty. This made me wonder how the gecko could run so easily on the ceiling, and why it was so much better at sticking than the spider.”

Using millions of microscopic hairs (setae) on its feet, a gecko can run up polished glass at a meter per second and easily hang by a single toe. Because van der Waals interactions depend more on geometry than chemistry, Autumn’s team proposed that the size and shape of the structures—not their chemical composition—determine the stickiness. To test the hypothesis, they used two polymer materials to successfully synthesize the world’s first gecko-inspired adhesive nanostructure. 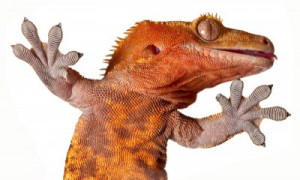 Discoveries made by Autumn and his students have opened the door for engineers to fabricate gecko-inspired synthetic adhesives. Autumn’s seven patents are now earning royalties for Lewis & Clark, while inspiring innovative ideas and emerging technologies for products as diverse as sutures and automotive braking systems. In the United States alone, federal grant spending on the study of gecko-like adhesive nanostructures was more than $30 million in 2008, with more than 100 patents and patent applications in this area.

“I think it is a useful lesson that the study of a lizard can have such broad and numerous applications ranging from nanosurgery to aerospace,” Autumn says. “Biological systems arrive at solutions that are unpredictable and, in some cases, unimaginable until we see them. There are millions of species out there waiting for us to discover their unique solutions to life’s myriad problems.”

Learn more about Professor of Biology Kellar Autumn in this profile from the Chronicle magazine or by visiting the gecko lab.