For an institution perched atop an imposing hill, Lewis & Clark produces a surprising number of dedicated bicycle commuters. Drop by a young alumni happy hour in Portland, and you’re likely to see bike racks overflowing. Much of the credit for bicycle enthusiasm at Lewis & Clark must go to the city itself: Portland has a higher rate of bicycle ridership than any other city in the United States and perennially tops Bicycling magazine’s list of the best American cities for bicyclists.

But Portland’s bicycle advocates—many of whom are Lewis & Clark alumni—have also contributed to making the city the bicycle utopia it is today. 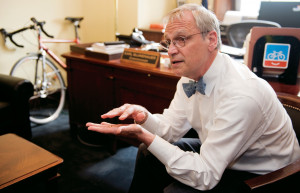 One of the nation’s top proponents for bicycling is U.S. Representative Earl Blumenauer BA ’70, JD ’76, who has represented Oregon’s third congressional district since 1996. During his nine years as a Portland city commissioner, he oversaw explosive growth in the city’s network of bikeways. In Congress, where he is as known for his neon bicycle lapel pin as for his trademark bow ties, he has been a relentless champion of funding for safe infrastructure for bicyclists and pedestrians.

“Even in a midsized city where it rains a lot,” Blumenauer told a crowd at the National Bike Summit in March, “we were able to put a stamp on our community. It became part of who we are, what we do, and it became a critical part of our local economy, of civic life, and of the social scene.”

Today, Lewis & Clark alumni continue to put the bicycling stamp on every area of Portland life. Here are a few of them.

Program manager at Alta Planning and Design, a bicycle and pedestrian planning and design firm.

Ben Waterhouse BA ’06 is communications coordinator for Oregon Humanities. He reported this story by bicycle.