Leah, a petite 3 year old in a frilly black-and-white dress and pink-and-orange Mary Janes, furrows her brow, concentrating hard on the task at hand—assembling small triangular red blocks into as many shapes as she can.

All around her, young children play with clay, climb on play structures, and whoop and holler in excitement at being at the Oregon Museum of Science and Industry (OMSI), a Portland landmark and one of the top science centers in the country. On the sidelines, parents watch or sometimes join in play with their children.

As Leah puts the magnetic pieces together, she hands them to Daniel Blasher CAS ’13, a psychology major at Lewis & Clark. “That’s great,” he says. “Can you make some different shapes?” 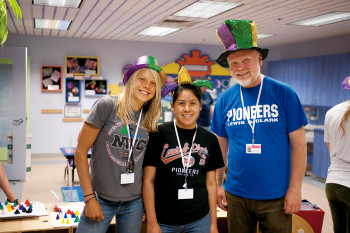 It looks like play—and it is. But it’s also serious psychological research being conducted by Lewis & Clark psychology professors and their undergraduate students in an unusual and very public setting. Lewis & Clark and OMSI represent one of four national research hubs for the Living Laboratory, a national project funded by a five-year grant from the National Science Foundation. At its core, the project enables researchers to work in collaboration with science educators to share their work with the public.

“This is a unique partnership between Lewis & Clark and OMSI to bring scientific psychology into the public view,” explains Todd Watson, assistant professor of psychology, who is conducting one of the studies at OMSI with preschool children. “The Living Laboratory originally began with the Museum of Science in Boston, and they’re expanding to different centers. OMSI, in collaboration with Lewis & Clark, is one of them.”

The idea is for researchers to conduct psychological field studies, in this case at OMSI’s Science Playground, a fun and often chaotic learning-play space for newborns to 6 year olds and their parents. “The project has three different audiences: the research scientists, both paid and volunteer museum education staff, and museum visitors,” explains Annie Douglass, OMSI’s senior science educator and the project coordinator. It was Douglass who learned about Boston’s Living Laboratory and got OMSI and Lewis & Clark involved. “One of the biggest interactions we’re looking at is how research scientists can communicate their science to the public in uncomplicated ways.”

Today’s study asks children to assemble blocks into shapes for 10 minutes. At first, young Leah seems perplexed by how to fit the magnetic blocks together. Then she progresses to putting together shapes that are very similar. By the time she’s assembled 20 shapes, she starts to make more complex and larger shapes.

This particular cognitive development study, one of four currently being conducted by Lewis & Clark researchers (see sidebar on page 25), examines the best way to maximize children’s creativity. “We’re looking at using these construction toys to encourage divergent thinking, a form of creativity,” explains Erik Nilsen, associate professor of psychology. “We’re interested in how children’s development stage affects how they interact with the toys and how we can use toys to increase their creativity.”

The children are studied one at a time. They sit at a small, kid-sized table with a student-researcher who encourages them and keeps them on task. Lewis & Clark students with notepads sit on the edges of the space and record the number, time, and creativity of shapes the children create. Another student, hidden behind a small bookcase, assembles trays of the magnetic blocks and hands them over as the child works through each tray.

Unlike a sterile, controlled laboratory environment, this living laboratory reflects real life, and researchers need to adapt their research strategies to the setting. Occasionally, an adult or another child wanders through the research area, sometimes stopping and talking with the child being studied. Once in a while, this person renders the data unusable by “helping.”

“It’s the price of working in such a public environment,” explains Janet Davidson, associate professor of psychology and Lewis & Clark’s principal investigator on the project. “Kids watch other kids, and occasionally they’ll answer for the other child. Sometimes parents even want to coach their child because they want their child to get everything right. We’ve had to throw out some data because the setting isn’t as controlled as the lab.”

Jennifer LaBounty, assistant professor of psychology, says today’s kids are especially good at ignoring the chaos around them, a good thing in the bustling science museum. “I’ve been amazed at how good kids are at focusing,” she says. Her project investigates how young children process facial emotions. “It may be a product of

our culture, where there are lots of things like television going on. With kids milling around and other stuff happening, even 2 year olds are able to listen and answer questions.”

Erik Nilsen wears a tall gold, green, and purple hat that looks like it came straight out of Dr. Seuss’ The Cat in the Hat. His student researcher, Daniel, sports a jester’s hat with long tassels and bells. Other students wear hats with sparkles and bright colors. Janet Davidson, whose study involves children finding hidden monkeys, had her students wear tiaras with pictures of monkeys on them. It’s all part of making research with young children fun and effective in a colorful public environment. 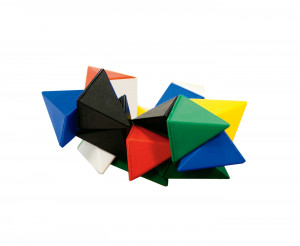 “We had to look interesting to kids because there are so many intriguing things for them to do at OMSI,” explains Davidson, who is investigating impulse control in young children. “We had to learn to be as attractive as the giant sandbox.”

The research space is a small room shared by kids working at low tables with Silly Putty. Parents come in and out, often seeing the research and stopping to ask about it. Many are so intrigued they sign up their children on the spot to participate. It’s made finding research participants relatively easy.

“One of the biggest advantages of doing research at OMSI is that we go where the children are, which makes it much easier to get data,” Davidson says. “We get a lot of data in a short time, much more than if we schedule people to come into the lab on campus. It’s also a little less artificial because we’re meeting people in real places and we get a wider range of children and parents.”

In Nilsen’s study, he’s looking at whether naming an object enhances or inhibits creativity. For instance, if a child calls an object a “cat” or an “airplane,” does it make them more or less creative? “In adults, verbally naming objects, called ‘verbal overshadowing,’ actually slows people down creatively,” explains Nilsen. “They get into a psychological rut. If they call something a deer, then they start making all these animal shapes instead of more diverse shapes. We think younger children won’t be influenced by this verbal overshadowing because they’re not tied into language as much. But older children, say 5 or 6 year olds, may be influenced by naming things just like adults.”

One little boy made complex shapes and loudly gave them names like “Megatron.” Another child began by making small, simple shapes that he called “spaceships.” Halfway through the 10-minute research period, he started working on one large object that he later announced was the “mother ship.” Like adults who named the objects, he stuck with the theme he’d developed.

While the research projects at OMSI will undoubtedly yield a wealth of valuable data for child development, the work is also having positive impacts on Lewis & Clark student researchers. For many, this is their first experience conducting research and working with children. Rose Lifschitz CAS ’13, a psychology major, says, “I’ve never worked with kids before, but I’ve always wanted to learn how to work with them, and this is a great way to do that.”

Davidson says having students apply the theories and practices they’ve studied at Lewis & Clark is invaluable. “The classroom isn’t always hands on, so this experience allows them to actually apply what they’ve learned. It’s a great way for these students to use their psychology major, supplement what they’re learning in the classroom, and have fun doing it.”

Illana Livstrom CAS ’13 is double majoring in psychology and sociology and wants to pursue a PhD in psychology. She finds gathering data to support parenting advice exciting. “We hear all of these ideas about what’s best for our children,” she says. “It’s neat to actually be able to see how experts come up with these ideas and participate in some of the research that supports them.”

Daniel Blasher says he’s learned a lot about how to work more effectively with children. “You have to give pretty explicit instructions to young kids. Otherwise, they play with the toys any way they please. We’ve had to write scripts to encourage kids to make different shapes, and we’ve learned to show them the shapes they’ve already made so they don’t keep making the same thing.”

Lifschitz, who wants to study psychology in graduate school, says the OMSI experience has made her think more about her career options. “I’ve never done research before, and it’s given me a taste of what that’s like,” she says. “I’m not sure whether I’ll pursue research, but it’s been fun and interesting. It’s given me a lot to think about.”

The Living Laboratory project will affect Lewis & Clark students in the classroom for years to come. “I’ll use examples about what 2 year olds say and how 5 year olds behave from these experiences in my lectures,” says Davidson. “I’ll also include the study results in my courses, and I’m going to take my classes to OMSI so they can observe some of this for themselves.”

For Todd Watson, the Living Laboratory has already changed how he teaches. “The project has made me more interested in public outreach,” he says. Building on this idea, his students have written books to teach children and parents how the brain works (these books will soon be available on the Internet); developed a “Brainmon” game modeled after Pokemon cards; and created a web comic about smoking and the adolescent brain. And during fall semester, Watson says students in the Brain and Behavior class are going to put on a Brain Day at Lewis & Clark for students, parents, and the community to teach them about brain function.

“It’s really important to take scientific information and explain it in ways kids can understand,” says Watson. “It will make a difference in the world.”

Freelance writer Bobbie Hasselbring is a frequent contributor to the Chronicle.