As an institution, Lewis & Clark has long been a standout in international education. This year marks the 50th anniversary of the overseas study program, a signature program of the undergraduate college. In addition, the Graduate School of Education and Counseling is leading family therapy training sessions in Uganda, Egypt, and India.

Lewis & Clark Law School shares in this proud tradition—and is adding its own unique stamp to the institution’s global education efforts. For many years, the law school has offered courses in global law

topics and has benefited from alumni, faculty, and students who have worked internationally. More recently, the law school has also participated in a well-regarded China program with the University of Missouri at Kansas City.

But near the end of the last decade, many in the law school community—including Robert Klonoff, dean of the law school—saw the need for more. “International law is high on the list of interests for incoming students,” says Klonoff. “They’re looking for strong programs in global law. We wanted to offer some fresh options.”

Using the law school’s existing assets as a springboard, the law school established a formal global law program with India as its cornerstone. “I wanted to create a unique program where we could be the best,” says Klonoff. “We wanted to be on the cutting edge.”

Increasingly, the cutting edge—according to business leaders, economists, and heads of state—is found in India. 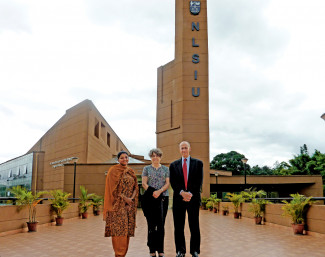 “We were already interested in India,” says Klonoff. “Economically and politically, India is enormously important. It’s the world’s largest democracy, and by 2050, it will be the most populous country. We were surprised how little was happening there in terms of global legal education.”

Starting an India program made sense legally and linguistically. As former British colonies, the United States and India both have legal systems based on British common law. “Legal assumptions, legal research, and the crafting of legal arguments are the same,” says Professor of Law Susan Mandiberg, one of the program’s founders. English is also one of India’s official languages. All court proceedings and published cases are in English. “A common language makes educational exchange much easier for students and faculty.”

Partnering With Top Schools and Firms

Klonoff and Mandiberg worked hard to develop the India program. In summer 2009, Klonoff visited Indian law schools and talked with prominent lawyers around India. Mandiberg joined him in summer 2010 to seek out opportunities for Lewis & Clark law students. The partners they selected include three top-tier Indian law schools: the National Law University in Delhi, the National Law School of India in Bangalore, and the National Academy of Legal Studies and Research in Hyderabad. They also established externship opportunities with leading Indian law firms and NGOs.

“Our partner schools can compete with any law school in the world,” says Klonoff. “We also believe our externships are at the very best NGOs and law firms in India.” These include heavy hitters such as the Human Rights Law Network and Fox Mandal Little, India’s oldest law firm, which advised the fabled East India Company.

To launch the program, Mandiberg taught a one-week course at the National Law School of India in summer 2010. She immediately realized the program would have a cultural learning curve. Legal pedagogy differs between the United States and India. “My Indian students were used to lectures, rather than the Socratic teaching methods of U.S. law schools,” she says. But the difference in teaching styles has not been a significant barrier to faculty exchanges. 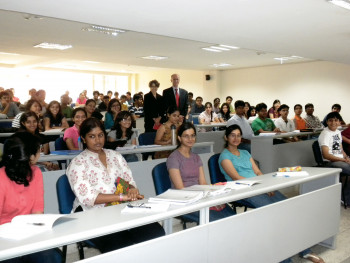 Also in 2011, Doug Beloof, professor of law and criminal justice expert, spent time in Bangalore as a Fulbright scholar.In early 2012, Tami Gierloff, assistant dean of the Boley Law Library, traveled to Delhi for an international conference on legal information and research.

“I was impressed with the dedication, passion, and professionalism of the faculty and staff I met,” Gierloff says. “We have many issues and concerns in common.”

The India program’s summer externships help Lewis & Clark students gain unique experience in global law. “Our students want to develop their understanding of how lawyers in other countries approach legal problems,” Mandiberg says. “We help them engage with the global legal community and build knowledge and skills.” 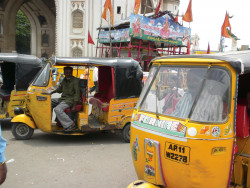 Working in India can be a challenging placement. “India isn’t an easy country to visit,” says Klonoff. The law school works closely with prospective externs to ensure a good fit.

Another extern, Lorraine Ater JD ’11, worked with Shyam Divan, one of India’s leading Supreme Court advocates. “Mr. Divan is a powerful presence in the Supreme Court, and a strong mentor,” she says. “He makes sure to apprise [externs] of the most interesting issues, and he gives us great latitude in choosing which cases

we want to engage with. I was trusted with the same types of assignments as his two supporting attorneys.”

Such valuable experience comes at a cost; externships are unpaid, and because students earn Lewis & Clark credit, they pay tuition plus travel and living costs. The program welcomes donor support. In 2011, the India program provided stipends to cover some costs through the generosity of Chris Helmer JD ’74, a partner at

Miller Nash. “We’re immensely grateful to Chris, who has been instrumental to our international work,” Klonoff says. “She’s really interested in opportunities for students globally and in seeing our students succeed.” 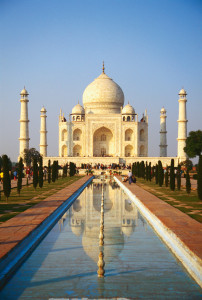 The program also thrives on visits from Indian law students. For each of the last three semesters, Lewis & Clark has hosted a JD student from one of its partner schools in India. Devangshu Nath, a spring 2012 exchange student from the National Academy of Legal Studies and Research, said his peers who studied at Lewis & Clark sparked his interest in coming: “[They] spoke very highly of the courses and the involvement of the professors.” Members of the Lewis & Clark community can also get involved. U.S. Magistrate Judge Janice Stewart and her husband hosted an Indian law student in their home for a semester, and the program welcomes other host families.

For exchange student Himabindu Killi, studying at Lewis & Clark has been “the most rewarding learning experience of my law school life. I have figured out that my interests lie in intellectual property law, and I’m looking at applying to several U.S. schools for an LL.M.”

As many Lewis & Clark students and alumni know, exchange programs offer benefits beyond the classroom. Nath says, “I’ve had to adjust to a new legal system and different teaching methodology over a very short time. I believe this will not only help me as a lawyer, but also act as a guide for the rest of my life. I will be more comfortable coping with new situations under circumstances that I’m not used to.”

Someday, Lewis & Clark graduates could practice in India. Currently, U.S. law firms cannot open offices in the country, but graduates of U.S. law schools may practice there if they have Indian citizenship or ancestry. They also must graduate from a law school approved by the Bar Council of India. Lewis & Clark is applying for approval.

Working with the National Law School of India, Lewis & Clark cohosted the India program’s first international conference in 2011 on enforcement of environmental law. “We attracted attendees from all over India,” says Heather McCambly, assistant director for global and diversity initiatives at the law school. 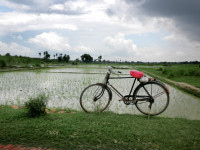 The next conference, currently in the planning stage, will focus on water law, including transboundary water issues, pollution, and access. India, which borders six other nations, is a global microcosm for boundary issues. As for pollution, “many cities in India have huge slums without plumbing,” Klonoff says. “Waste goes directly into the groundwater system,” making access to clean water difficult. Conference organizers hope to attract students, faculty, and guests from around the world.

The law school regularly brings world-class speakers and events to Portland. Visiting experts from the India program include M.C. Mehta, India’s leading environmental activist, who has fought to protect international treasures like the Taj Mahal and Ganges River from pollution. They also include Sairam Bhat, a professor from the National Law School of India who spoke on the legacy of the 1984 Bhopal gas leak, and environmental activist Debi Goenka, who spoke about climate change.

“We’ve opened events up to the Portland community,” Klonoff said. “We want to create a buzz in the legal community, and international outreach is part of that.” The law school is also working to form mutually beneficial relationships with Portland’s Indian community.

What does the future hold for India? 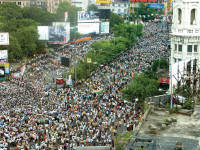 “We’re consolidating what we’ve built and making sure it’s excellent,” Mandiberg says. “We have great opportunities, but we are proceeding carefully so we can continue meeting Lewis & Clark’s high standards.”

“Our goal is to build a sustainable program,” says McCambly. “That way, as India’s influence grows, so will Lewis & Clark’s law program.”

Genevieve J. Long is a freelance writer in Portland.