Chances are Traci Harris ’03 never imagined she could design and build an African-style marimba to fulfill a physics requirement.

Yet exploring intriguing, unconventional, and sometimes outlandish physics problems is what Advanced Physics Laboratory is all about. Recent projects by students in this upper-level class have included building a robotic car, equipping a mountain bike with shock-recording sensors, and designing a parabolic microphone to eavesdrop on conversations across campus (see the related article at right). 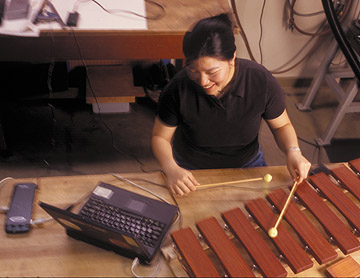 The wide range of undertakings reflects the breadth of student interests as well as the ubiquity of physics. They may not be as profound as splitting atoms or scoping out new planets, concedes Michael Broide, associate professor of physics and department chair, but these self-selected experiments engage students in important discovery-based learning.

“I discourage them from doing ‘canned’ stuff,” says Broide, who teaches Advanced Physics Lab along with Assistant Professor Stephen Tufte. “It’s more motivating for them to blaze the trail than to follow it.”

The semester-long class is a requirement for physics majors that students can take twice during their academic careers. It entails both a four-week-long minor project, in which students can choose from a list of conventional physics inquiries, and an eight-week-long major project, which is expected to be more ambitious and distinctive. During twice-weekly class time, students work on their projects or consult with Broide, who describes his role as more of a resource coordinator than a lecturer. “The fun part of this job is hooking up students with their own interests,” he says.

Harris, a 21-year-old Alaskan native with an affinity for making music, was taking a one-credit African marimba class in the music department when she enrolled in Broide’s class. She enjoyed the natural, “trancelike” sound made by the xylophone-like marimba, which is thought to have originated in South America or Africa. For her projects, she says, “I wanted to explore the physics behind it.”

Broide encouraged her to contact local marimba maker Carl Dean, who graciously volunteered his time and expertise. In two afternoons at Dean’s house, Harris learned how to craft the instrument, and used Dean’s vertical oscillating sander to carve three marimba bars —all Ds in different octaves—from pieces of rosewood she had purchased.

“I discourage them from doing ‘canned’ stuff,” says Broide, who teaches Advanced Physics Lab along with Assistant Professor Stephen Tufte. “It’s more motivating for them to blaze the trail than to follow it.”

Those three notes composed her minor project. For her major project, Harris set a more ambitious goal: to build a nine-bar marimba from scratch. Her workshop was the resource-laden Natural Science Shop on the second floor of the Olin Center for Physics and Chemistry. With its electronics lab, machine lab, woodshop, and welding and sheet-metal capabilities, the shop features an unusual array of resources for a small liberal arts college.

Harris’ challenge of carving amber-toned padouk wood into nine marimba bars was essentially a problem of acoustic physics: How do each bar’s length, thickness, and density affect its tone?

“The physics of a carved bar is way, way complicated,” says Harris, who made arch-shaped cuts of varying degrees on the underside of each bar. “It’s amazing how many more factors are involved in carving wood than in a traditional textbook physics problem.”

With minimal help from Attinasi, Harris measured, routed, cut, and drilled her way to building a 3-foot-long tabletop marimba, which she plays with two skinny mallets topped with tightly wound balls of yellow yarn. “After it was done she had this ecstatic look of ‘I made it!’ ” recalls Attinasi. “That’s what we want.”

At the end of the semester, students give a 20-minute talk on their projects and field questions from classmates, professors, and other physics students. Science majors aren’t necessarily accustomed to speaking in front of their classes, Broide says, so the final presentations are a way “to help them develop a voice.” In preparation for crafting their own presentations, Broide asks students to write critiques of the speakers in each of the five physics colloquia held during the semester.

Brenda Gillman ’03, for whom a semester in Hawaii sparked a fascination with the physics of rainbows, appreciated the presentation part of the course. Despite initial fears, Gillman says it helped her get accustomed to explaining her work in front of groups and even led to a summer research assignment. After hearing Gillman’s Advanced Physics Lab presentation on rainbows, Professor of Physics Herschel Snodgrass hired her to assist his inquiry into the flow of gases on the sun’s surface.

Gillman says the course, which she took during the spring semester of her junior year, provided a refreshing break from more textbook-oriented classes and made a big contribution toward her decision to pursue graduate school.

“It’s the first time you say, ‘This is what I want to do, and this is how I want to do it,’ ” says Gillman, a 21-year-old from Salt Lake City. “At some point, the project definitely becomes your own, and that’s when you start to love it.”