One Saturday morning this past May, MardiLyn Saathoff was feeling overwhelmed as she cleaned the home of the sister who had died suddenly just two weeks earlier.

Her cell phone rang. It was her boss, Oregon Governor Ted Kulongoski, calling to thank her for brokering the state’s contract with the Warm Springs tribe. He had a few work-related questions for her too, but she didn’t mind.

“I was standing on a ladder cleaning out a kitchen cupboard full of spices, trying to decidewhat to do with everything,” recalls Saathoff, whose sister, Louise, had died unexpectedly from a blood clot after routine surgery. “Believe me, taking a question from the governor at eight in the morning was the easiest decision I made that day.”

Saathoff, even on a good day, has more on her mind than most people. In early 2003, she reported to work as general counsel and chief business and economic development adviser to Kulongoski. As his chief counsel, she advises him on all legal matters, including legislation; ethics; extraditions and pardons; and relations with other states, countries, and tribes. If litigation with statewide import looms, she oversees that too. On the business end, Saathoff analyzes opportunities and makes recommendations tothe governor for the state to better position itself economically.

It’s an exciting time in a career that has followed a pattern of moving between the private and public arenas. “It’s a very Oregon approach. At some point, a lot of Oregonians feel it’s time to step upand give back to the public sphere.” Only, in Saathoff’s case, that point has come up several times.

Saathoff’s 5’2” stature is disarming, something she actually likes. “I don’t want people to think I’m a threat. They see me and think, ‘Don’t worry about her.’ Even as a lawyer, that’s my negotiation style—it’s not about me winning and you losing, but it’s about results. Let’s look at the end goal and figure out the best way to get there together.”

Saathoff doesn’t remember exactly why she wanted to become an attorney, but she knows the desire dates back to grade school. Her dad was a National Guard supply sergeant and later a computer programmer; her mom was an administrative assistant in the central office of Portland Public Schools.

Their blue-collar home provided hidden educational advantages: The family had no TV until she was well into her teens. So she read books instead. “I was reading my mother’s books by the time I was in about fourth grade. She loved mysteries, and to this day, I still read them.” Though she excelled in high school courses, Saathoff didn’t know the proper hoops she had to jump through for college. She missed taking the SAT; fortunately, letters from her teachers convinced Willamette University to admit her—and give her a scholarship besides.

After two years, Saathoff transferred to Lewis & Clark, where she felt a particularly strong connection. “From my first day on campus,I knew the College had the resources to help me become a better citizen,a better person, and a better critical thinker.” She especially admired her Lewis & Clark teachers. “My professors were connected, not just to their classrooms, but to the world.” She graduated in 1978 with a degree in sociology.

Although she was still considering law school, a different career direction tugged at her heart. Early in her undergraduate career, Saathoff had managed a YMCA youth program and had tutored prisoners in reading at Mill Creek Correctional Facility in Salem. These experiences awakened in her a desire toteach. She enrolled in Lewis & Clark’s Graduate School of Education and Counseling and earned her master of arts in teaching in 1983.

At Sunset High School in the Beaverton School District, she taught history and political science, plus a psychology class that was especially popular among students. “It allowed students to do what they do best: to think about what makes them who they are but without being so self-absorbed.” She found herself living the 24/7 schedule of a teacher who always makes time for her students.

After several years of teaching, Saathoff’s own time had come for a change. She knew if she didn’t make the leap to law school, she would always regret it. So she began taking night classes at Lewis & Clark Law School and earned her third degree from the College, a juris doctorate, in 1990.

After law school, Saathoff went to work for Stoel Rives, one of the largest law firms in Oregon, specializing in corporate, securities, and finance law. It was a new area for her, but she was up for the challenge. Saathoff loves being a perpetual student, throwing herself into new disciplines and learning them thoroughly.

“I was fascinated by business. I also loved the discipline a corporate, securities, and finance attorney needs to have to be good.” However, in 1996, after five years with Stoel Rives, she received a tip from a friend about a job that would result in her supervising a new Business Transactions section for the Oregon Department of Justice. Her interviewer was the state’s attorney general at the time, Kulongoski.

Soon she was walking the halls of the state house and senate, answering representatives’ questions about legislation her boss was supporting. She managed to avoid getting caught up in the cynicism that frequently surrounds politics.

It’s not about me winning and you losing, but it’s about results. Let’s look at the end goal and figure out the best way to get there together.MardiLyn SaathoffCAS ’78, M.A.T. ’83, JD ’90,

“You have to believe in the system,” says Saathoff. “I’ve never had a doubt that state and local politicians have a real desire to serve Oregon. We do disagree sometimes, but we’re all there to make a difference.” After spending four years in the role, she found herself ready to return to her corporate securities and finance background. Saathoff stepped back into the private sector at Tektronix, the Wilsonville-based manufacturer of computer and electronic measurement devices. She spent the next two-plus years as senior counsel to the company’s communications video business as well as its human resources division and business practices program.

Three days before Thanksgiving 2002, while most people at Tektronix were on company shutdown, Saathoff received the first of many surprise phone calls from the newly elected governor, Kulongoski. He was offering her the job as his chief legal counsel, an offer she initially turned down. “But he’s nothing if not persistent.” Two weeks later, she accepted the governor’s offer and took a leave of absence from Tektronix, where she is still technically on leave. As general counsel, Saathoff felt well prepared. But as a policy adviser, she’s found the road bumpier than she anticipated.

For example, one piece of legislation, Access Scholarships for Education Trust, was supposed to be one of those slam-dunk, controversy-free pieces of legislation. The idea behind the bill, proposed in the summer of 2003, was to establish an endowment that provided need-based awards for students to attend either public or private education institutions in Oregon. Saathoff “was not prepared for the diversity of opinion within the academic world for this kind of idea. We met opposition everywhere.” Some state universities, at a time when higher education was experiencing budget decreases, wanted to have greater control of how any new money was allocated. In the end, the bill died in committee. “It was a failure,” she says. “I underestimated the political will, strategy, and collaboration that would be needed to get it through the legislative session.”

A well-earned failure, upon reflection, often brings deeper wisdom. After the bill died, Kulongoski phoned Saathoff to let her know that higher education would be the focal point of his next year in office. Saathoff and other aides recast the state’s higher education board and, just as important, met with constituent groups to build vision and consensus. The result: The governor has successfully championed an increase in need-based grants for postsecondary students, both public and private, that doubles the amount appropriated last session. 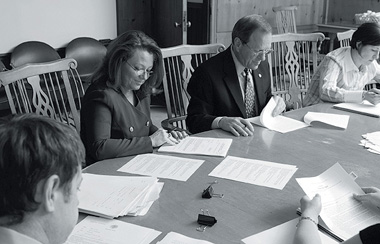 Saathoff has advised Kulongoski on a number of other very public, sometimes controversial, matters. Most recently she helped to broker one of the country’s first off-reservation revenue-sharing contracts with an Indian tribe. In the deal signed in April, the Warm Springs tribe transferred 175 acres of conservation lands (environmentally fragile areas) to the state in exchange for the legal go-ahead to expand its casino to commercial property in Cascade Locks. Part of the deal requires the tribe to establish a nonprofit entity that includes education funds for all Oregon children.

“This was uncharted water for Oregon. We can’t tax the tribe, so how do you provide any real type of revenue-sharing with the state?” The project was part business deal, part politics, and part international law. For someone like Saathoff who likes a challenge, “it was fascinating.” The Department of Interior initially rejected the compact on procedural grounds, requiring the tribe and the state to jump through some additional hoops. But it is just a matter of “timing and process” before the arrangement is resubmitted and approved, maintains Saathoff.

Meanwhile, as the governor’s chief economic development adviser, Saathoff has aided the creation of a nonprofit called the Oregon Nanoscience and Microtechnologies Institute, a unique public-private collaboration involving several state universities and hi-tech companies and investors. The group’s board includes executives from Hewlett-Packard, FEI Company, Pixelworks, LSI Logic, OVP Venture Partners, and Pacific Northwest National Laboratory. Saathoff represents the governor on the board. The group hopes to leverage private, state, and federal dollars to attract more PhDs to the state. The goal: to put Oregon on the cutting edge of technology and innovation, attracting new companies and jobs.

In the public sphere, every person is a stakeholder with needs that demand attention. Often these needs translate into heavy workloads and long hours for public officials like Saathoff. Fortunately, she has been able to remain an active mom through it all. Son Payton, 15, is a freshman at Portland Lutheran High School, and daughter Mackenzie, 10, attends that institution’s grade school. Saathoff, who divorced in 1998, knows her dating life has suffered. She quips that any guy who wants a relationship with her would have to have “a very flexible schedule and be willing to attend lots of political, business, and charitable events around town.” He’d likely also have to attend some plays at the Artists Repertory Theater in Portland, where Saathoff sits on the board.

Looking toward her future, Saathoff would consider supporting Kulongoski through a second gubernatorial term or following him to Washington if he chose to work there at some point. Whatever doors open for her, Saathoff has proved she’s not afraid to walk through them.

Eric Larson is a freelance writer and president of Stellar Media in North Carolina.