Reflections by the Teacher of the Year 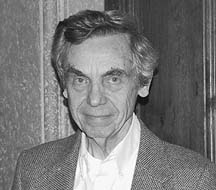 by William Rottschaefer, Professor of Philosophy

One beautiful spring afternoon in the mid-1980s, Dave Martinsen and I were teaching our class on human sociobiology. While I lectured on, absorbed in my philosophical speculations, Dave, with his customary calmness, alerted me to another part of the room. There was one of our women students—a flaming copy of our textbook, sociobiologist E.O. Wilson’s notorious On Human Nature, in one hand and a bucket of water in the other. As many a good student does, she was rebelling against her teachers, though in a manner not frequently attempted—I’m happy to say. For me, this event symbolizes teaching—an engagement, both stormy and wonderful. Our student told us emphatically what she thought of Wilson’s ideas. Yet we continued to preach the gospel according to Wilson. By chance, we met again that summer. She had been in Cambridge, Massachusetts, met Wilson, and found him wonderful.

I began teaching in 1958 at Chaplain Kapaun Memorial High School in Wichita, Kansas. I taught Latin, algebra, and business mathematics, perhaps more accurately rendered “arithmetic for the disinclined.” One of the school’s top performers—on the basketball court—challenged me to fisticuffs. He and his father (the basketball coach) were somewhat perturbed because I deemed that he should spend time after school practicing sums rather than basketball. That young scholar taught me quickness afoot. He and his class also schooled me to speak a minimum to them as a group and to engage them one-on-one in their scholarly activities. I have attended to their sage, though perhaps unwitting, lesson ever since.

Often, especially in logic, one of my favorite classes, when we have hit upon a difficult matter, I mention a slogan that appeared on the packages of Pall Mall cigarettes. It read “Per Aspera ad Astra.” Literally, it translates “Through Difficult Things to the Stars.” Without an inkling of why the makers used it, I offer this exegesis. Though cigarette makers have often been accused of false advertising, perhaps the makers of Pall Malls were not guilty. For some religiously persuaded, the message may be perfectly clear: “Though you will have to go through the hell of cancer in this life, you will enjoy eternal life thereafter.” Interpreting: Learners, both teachers and students, will have to go through the hell of learning. In the end, however, when our world ends, as it does every semester, we will have earned the heavenly blessings of aspiring lovers of truth, beauty, and goodness. I am eternally grateful to so many students who have put me through the hell that leads to that heaven.

Having received the Teacher of the Year award, I feel grateful, but undeserving. All my colleagues are such wonderful teachers. There should be a prize for everyone. My students and colleagues inspire and teach me. I can’t thank them enough, especially my longtime former colleagues in the philosophy department, Sevin Koont and Clayton Morgareidge, and the two colleagues with whom I have had the frequent opportunity to team-teach, Bob Owens in mathematics and Dave Martinsen in biology, whose recent premature death has saddened me deeply. Next year, I will again be teaching the History and Philosophy of Mathematics with Bob Owens—our sixth time. I can’t wait!