“Remember that being a woman is different in Afghanistan.”

I was getting yet another opinion on my decision to travel to Afghanistan. The statement was said out of love, in an effort to remind me that I should be aware of my surroundings and behavior. Just because I was a strong, independent woman, I should be sure to remember to respect local culture. But it was also coming from someone who had never traveled to Afghanistan.

In this day and age of the Internet and television, we can know a lot about the rest of the world without ever leaving our homes, and that gives us the illusion of being informed. Like many of my peers, I too had a certain view of what “women in Afghanistan” meant. Visions of burqas and limited rights came to mind. But I also knew
that on the other side of the world, we often only hear one side of the story. We are limited by what mass media feeds us. So I made an effort to go into Afghanistan with an open mind and an open heart.

I had been invited to take part in a two-week public art project for the nonprofit Mountain2Mountain. Our goal was to arrange public installations of Streets of Afghanistan, a series of large-scale photographs designed to show Afghanistan as Afghans see it. The exhibition had recently toured the United States and was now returning to its country of origin—to communities that rarely experience public art.

Afghanistan is not a travel destination you choose lightly. I was well aware of the risks that awaited me on the other side of the world. But there was also so much that I didn’t know.

In terms of women’s rights, Afghanistan is full of obstacles, but there’s also room for hope. In the post-Taliban world, between 1999 and 2010, the number of girls enrolled in education rose from 4 percent to 79 percent. It is a country where a woman can be beheaded for refusing to go into prostitution, but it’s also a country where the youngest member of Parliament is a woman. Assuming that we know what women’s rights means in Afghanistan results in closing our minds to what is possible.

If you enter even a handful of government offices, you will inevitably find a few
of them with a woman in charge. The women bureaucrats whom I met along the way were strong and efficient, but also welcoming. They are the kind of people who get things done. Seeing them in action in a male-dominated society is inspiring, and it challenges the status quo.

One day, while eating lunch in a restaurant, I saw a woman in the mixed-gender section with her burqa pulled away from her face so she could eat. (As females, we were not allowed to sit in the main room of the restaurant.) She wore a noticeably large wedding ring, sparkling with diamonds. Her eyes were outlined in thick black liner. I was taken aback by how beautiful she was. I paused, analyzing my reaction. I was appalled at my own surprise at her beauty. Even for me, out on the streets, burqas seemed to float by like ghosts, making it easy to forget that underneath it is a woman, a mother, a sister, an individual. 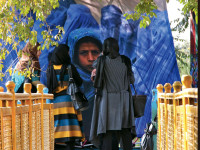 Being in Afghanistan wasn’t just a reminder of the differences—it held up a mirror, forcing me to think about my own role as a woman in my own country. When we come from a society where women and men can interact freely, our initial reaction is to play the “women’s-rights-are-different-in-Afghanistan” card, but in the United States, a woman is sexually assaulted every two minutes; we too have room to grow, and in the end, it is just as important to remember our similarities as our differences.

Women’s empowerment, no matter where we are, is about access to education and the ability to feel safe. It is about having the right to pursue any career we want and expect to be paid just as much as our male counterparts. It is about having the right
to make the choices that affect our bodies. We as women are part of a global sisterhood, and positive change for one of us means positive change for the rest of us. We must believe in that ripple effect, because if we don’t, we close ourselves off to the possibility of change, and ultimately that affects all of us, no matter what country we’re in.

Anna Brones is a writer and digital communications professional based in Portland. She is a regular volunteer with Mountain2Mountain, a nonprofit dedicated to creating education and possibilities for women in conflict regions.