The Need to Succeed

Mollie Galloway, assistant professor of educational leadership, will tell you she never cheated in school. What’s more, she can recall only two instances where she knew other students were trying to take advantage of her work.

“One was on a high school geometry test, which is funny because I wasn’t good at geometry.”

The second time was when she was an undergrad. “A male athlete asked if he could use a paper I’d written for the same course a year earlier on Title IX’s effect on female athletes, which came from a feminist perspective. The paper was so specific, there was no way he could have handed it in without getting caught.”

According to her recently published research paper, “Cheating in Advantaged High Schools: Prevalence, Justifications, and Possibilities for Change” (Ethics & Behavior, Taylor and Francis Online), her experience was vastly different than that of today’s high school students, especially those in upper-middle-class communities.

“In many cases, cheating in these types of schools has become normalized,” she says, “primarily in response to increased pressures to achieve, succeed, and maintain status.”

Playing the game of school

Galloway’s research is a continuation of work she started more than a decade ago, while completing her PhD at Stanford. At the time, she was coaching high school field hockey at a top public school in the Bay Area and began noticing patterns among her players.

“Some players were forced to quit so they could take SAT prep classes. Others had signed up for hockey because they thought it would look good for college. And there were those who would go straight from field hockey practice to club soccer practice, and not get home until 8 p.m. Then they had three hours of homework and still had to find time for dinner.”

Around the same time, Galloway began talking to a colleague, Denise Pope, who had just finished a book, relaying the findings of her dissertation study. Pope’s research was initially designed to explore engagement among a group of “successful” and highly motivated high school students.

“Instead, students saw themselves as ‘playing the game of school,’ rather than being engaged learners. They were willing to sacrifice their physical and mental health—and their academic integrity—to get ahead.”

At Stanford, the conversation soon expanded, bringing together researchers and offices from across the institution.

“University mental health professionals across the country were seeing a rise in the number of severe psychological problems among incoming students. We began to wonder what was happening, both on our campus and more broadly.” The group originally planned to start an outreach program for incoming Stanford students but realized they needed to start younger. Their collaborative effort led to the launch of Stressed-Out Students (SOS) in 2004, which has since evolved into Challenge Success, a nonprofit that works with families and schools and focuses on the academic, social, and emotional development of students.

Getting ahead and staying ahead

“The majority of adults in these communities are not affluent; they did not inherit their money. And one primary way they make sure their kids stay ahead is through education, and by setting certain bars.” As her research indicates, the pressure to maintain or improve their parents’ status—the need to succeed—often translates into cheating.

“These students are often willing to give up the pursuit of knowledge and forgo their academic integrity if it means getting ahead.” 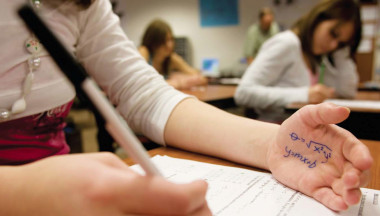 Everyone else is doing it, so I should too

Galloway’s survey included a list of 13 questions that addressed different points on the cheating spectrum, from working together when a teacher asked for individual work, to turning in someone else’s work as your own. Overall, 93 percent of those surveyed said they’d cheated at least once, while more than a quarter of upperclassmen claimed to have cheated in at least 7 of the 13 ways the survey listed.

“One of the most disturbing quotes I heard came from a junior who said, ‘The reason why people are cheating or are abusing the system is because they think everyone else is cheating or padding their résumé, and if they don’t, then they’re screwed. It’s not necessarily that we’re compromising our morals and values—we’re compromising for a just reason.’ Students were justifying their cheating behavior by calling it ethical.”

Similar to Galloway, Lexi Hendrickson and Bre Bollinger, two Beaverton-area students who asked that their names be changed for this article, are certain that they’ve never cheated, at least not on what they’d consider to be big stuff.

“I’ve cheated on busywork,” Bollinger adds, meaning worksheets and other assignments that she feels don’t steer her toward greater learning. As for the types of cheating they’ve witnessed, Hendrickson speaks up.

“Last year, for a two-person physics project, my partner and I had to answer the questions related to our experiment. I finished mine first, and she asked if I could email her my responses so we could merge them into one document. Later, I saw she basically copied my answers and handed them in as her own. It bothered me because I’d done all the work.” It troubled Lexi enough to tell her teacher, but she chose not to confront her classmate about it. “I didn’t want to ruin our friendship.”

Speaking from the parental perspective, Lexi’s mother, a Lewis & Clark graduate, weighs in.

“It starts much earlier than high school. Most of the pressure comes from the parents. I know plenty of parents in well-off families who are open about doing schoolwork for their fourth- and fifth-graders. Part of their reasoning is they want their kids to get ahead.

It’s as if they believe there is only one spot each year at Harvard and if their child doesn’t eliminate all competition they won’t get it. I even had a mother mention wanting to help her 12-year-old daughter start a nonprofit, not because the daughter wanted to, but because the mother thought it would look good for colleges.”

It’s not cool to love learning, it’s cool to work the system

Galloway says what she noticed a decade ago among her field hockey players not only holds true today, but also has become more pronounced.

“Kids are overloaded, and many believe they have to cheat. As they see it, the system is unfair, and what they’re doing is, in a sense, retaliating against the system itself. It’s one of the neutralizing techniques students use to make themselves feel better about their actions.”

Galloway points out, however, that it’s not the case that all students have turned to cheating as a way to get ahead, or that all schools are burying their heads as the reality pops up around them. Her research cites one specific instance, an all-girls school, where cheating was less frequent, where teachers dedicated entire lessons to showing students what they could do to avoid plagiarizing.

“For me, it goes back to schools being able to address what they truly care about and what they want their young people to learn. In that specific instance, it wasn’t just about learning how to avoid plagiarism. It was about the overall culture of the school, and their focus on integrating what it means to be a good citizen throughout their curriculum.”

When teachers begin including greater cultural context in their lessons, they can affect the learning environment in such a way that minimizes cheating and reinvigorates their students’ desire to pursue understanding and knowledge.

“There’s a movement where schools think all they need to do is have their students pledge an honor code to maintain academic integrity. That doesn’t address the root cause of cheating. Students will still go around the code if they need to, and that’s because of the power that the culture of achievement can have over them.”

One recent, widely publicized example occurred at Harvard, where investigators claimed more than 100 students cheated on a final exam. Among other things, the scandal points out how difficult it can be to define exactly what constitutes cheating. To quote Farhad Manjoo, writing for Slate, “[The students] merely worked with fellow students and their instructor to make sense of the tricky exam questions. What they did—work together to find an answer—should be encouraged.” Manjoo’s piece also references a New York Times article covering the same scandal that claims that, in the eyes of most students, collaboration was seen as a norm, and therefore they hadn’t done anything wrong.

Part of Galloway’s work going forward involves branching out from her most recent research and examining whether or not upper-middle- class high schools are prone to what David Callahan refers to as “trickle-down” cheating. By spring 2013, she hopes to be working with a number of schools in the Portland area, looking at cheating through a broader lens.

“Schools in upper-middle-class communities are not homogeneous. What we find is that students of color, as well as those from lower socioeconomic status who are in such schools, often feel that something is awry, because the dominant culture doesn’t seem that interested or invested in their success. We hope to examine why these nondominant and marginalized students think cheating happens in their schools and how the culture of the school shapes this behavior.

“If Callahan’s idea of ‘trickle-down’ cheating holds, we may discover that marginalized students are cheating, too—perhaps because they perceive that everyone else is. Or they might not be cheating—maybe, say, because they feel that even if they did, they wouldn’t get the same rewards from the system as upper-middle-class students who cheat.”

On a larger level, Galloway believes the best approach to addressing cheating is to continue to dig deeper into the modern valuation of achievement, and how people come to define success from the broadest of perspectives.

“These communities need to come together, including those from nondominant backgrounds, to dialogue around how their schools define success. These conversations, if they’re guided well, can fold into further inquiry around how the definition of success shapes who gets included and excluded in school culture and decision making, how it guides curriculum and instruction, and how it affects the messages our young people hear.”

Galloway understands that this plan, however hopeful, comes with a number of inherent challenges.

“First, these are the types of conversations many people don’t want to have. Those who come from the dominant groups do not want to give up their privileges.

“It’s also important to consider how our national education policies reward student achievement, which is narrowly defined by standardized test scores. Well-performing schools may be reluctant to question their practices and policies, but inclusive, authentic, and equitable practices are the ones that are most likely to ensure each student meets a high standard of excellence.”

Another challenge relates to the notion of moving beyond dialogue and into action.

“What does it look like in the larger community? That’s really the million-dollar question. I’ve found that, when I speak with students, many of them talk about how they don’t want to cheat, but they’re caught up in it because that’s the way the system is. They don’t want to be left behind.

“I think students are our best voices for change. They may be able to articulate new ways in which we can begin to define success and reconnect with a love of learning rather than a need for achievement.”

This content originally appeared in Winter 2013 issue of The Chronicle. Dave Jarecki is a freelance writer in Portland.