The initiative is part of Lewis & Clark’s emerging entrepreneurship program, which is designed to help students translate their liberal arts knowledge and experiences into practical skills for success beyond college.

The competition, which was announced in January, was open to teams of students from any of Lewis & Clark’s three schools and alumni from the classes of 2011 and 2012. Initially, the competition attracted more than 40 teams. From there, 11 teams were selected to develop business plans with the support of an entrepreneurial mentor.

Over spring break, these teams participated in a series of workshops to help them learn more about what it takes to develop and launch their ventures. They covered topics such as market analysis, networks, business financials and plans, and branding.

In late April, the teams competed in the institution’s first Pitch Day, a chance for each team to pitch their business plans to a panel of expert judges. At the close of the event, five teams were selected to receive continued mentoring and seed funding to support their ventures during the summer.

“Pitch Day is the single most exciting thing I’ve been part of in my 12 years at Lewis & Clark,” says Brian Detweiler-Bedell, academic director of entrepreneurship. “I’m proud to be part of a competition built around mentoring, relationships, and learning.”

The five finalists will move on to the next stage of the competition, which will culminate next fall in a last round of presentations and funding totaling up to $30,000 for the two most promising ventures. (The competition is funded by an anonymous alumnus and spouse.) 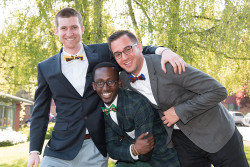 House of Tayo showcases African sophistication, style, and flavor through contemporary, locally made clothing and accessories. With style influences ranging from the Motown era to the works of Ozwald Boateng, the brand was created in 2011 and utilizes African textiles and fabrics produced by Rwandan tailors and artisans in Kigali. 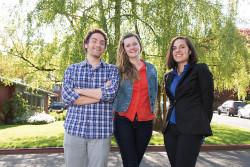 Kokonect is developing an online platform optimized for mobile devices to help members of college communities share resources and engage with one another on the fly. Drawing on theories of appropriate technology, Kokonect will localize the connective power of the Internet, connecting “trusted strangers” on practical terms to share and collaborate, beginning here at Lewis & Clark. 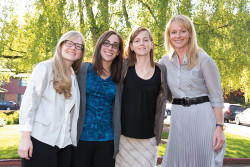 A clinical mentoring program for adults with eating disorders, MentorED bridges the gap between higher and lower levels of care. The program recruits, trains, and matches graduate students and professionals in psychology and related fields with clients during their various stages of treatment and recovery. 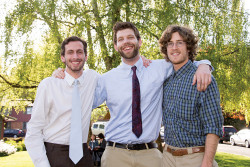 The goal of the Portland Mushroom Company is to provide high-quality locally produced oyster mushrooms to the Portland metropolitan area and lead the way in urban mushroom cultivation in the Northwest. The demand for oyster mushrooms is currently met by large agribusinesses located hundreds of miles away. The team’s oyster mushrooms are grown locally on agricultural by-products and urban-generated waste using an innovative cultivation technique that eliminates plastic waste from the operation. 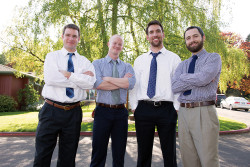 Forge Portland offers a shared workspace that will house nonprofit organizations with common missions. Forge Portland will provide an opportunity for organizations to accelerate their progress toward their goals by reducing overhead costs, pooling resources, and creating a vibrant and collaborative atmosphere that maximizes productivity and work satisfaction.