In the fall of 1962, senior Myrna Ann Adkins BA ’63 climbed aboard the S.S. President Cleveland docked in San Francisco. Filled with anticipation, and a bit of trepidation, she and about 20 Lewis & Clark students were heading to Japan for a semester of cultural immersion and study. Their voyage was one of five inaugural overseas study programs offered by the college.

“I’m fond of saying that when I went to Japan, I never fully returned,” says Adkins. “That journey influenced many of the insightful decisions I’ve made. It was a life-changing experience.”

Adkins is now president and CEO of the Spring Institute for Intercultural Learning in Denver, where she leads the nonprofit’s marketing and development efforts, designs programs, and presents workshops on cross-cultural communication, both domestically and internationally. She was also a trainer and consultant for the English Language Training Program, a technical assistance project sponsored by the federal Office of Refugee Resettlement for 20 years. She has a special interest in mental health and trauma issues of refugees from war-torn countries.

If it weren’t for John Howard, who was president of Lewis & Clark during her undergraduate years, Adkins might never have gone to Japan. Her father wasn’t comfortable with foreign travel.

“President Howard called him on the phone, and he must have been very reassuring because my father gave me his blessing,” she says.

I’m fond of saying that when I went to Japan, I never fully returned. That journey influenced many of the insightful decisions I’ve made. It was a life-changing experience. Myrna Ann Adkins BA’63

From day one, everything in Japan fascinated Adkins—the bustling subway system, her hospital visit in Hiroshima, the coal miners’ demonstration she encountered on her way to meet the head of the Socialist Party, and the gracious Kyoto family she stayed with in Kanazawa.

Adkins returned home to graduate with a bachelor’s degree in political science. Soon after, she joined the Peace Corps in the Philippines, where she trained teachers who taught English as a second language from 1963 to 1965. During the summers of 1965 through 1967, she worked as a trainer for the Peace Corps’ new volunteers.

“We lived in a rural barrio. No electricity, no running water, no indoor plumbing,” she says. “We learned much from each other about culture and diversity in action,” she says.

Adkins returned home and earned a master’s degree in Far Eastern studies. She and her husband, John, and their two children moved to Denver, where she spearheaded a grant program to assist Hmong refugees after the 1975 communist takeover of Laos and the 1980 passing of the Refugee Act in the States.

Adkins eventually accepted a leadership role at the Spring Institute, where her work revolves around culture and communication. One of her programmatic interests has been developing cultural ties with Mongolia. Mongolia has one of the fastest-growing economies in the world.

“In 1996, six years after Mongolia came out from under Communist domination in a peaceful revolution, we met with some of its political leaders in Denver,” says Adkins. “The current chairman of parliament and deputy chairman came to the institute to learn English.” 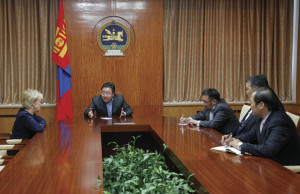 Myrna Ann Adkins with Tsakhiagiin Elbegdorj, president of Mongolia, and other dignitaries.Adkins currently sits on the board of directors of the North America–Mongolia Business Council.

Last July, Adkins attended a dinner in Washington, D.C., which included the president of Mongolia along with various business and congressional leaders. “I was shocked when Mongolian President Tsakhiagiin Elbegdorj awarded me the Medal of Friendship, noting that we were helping his country long before the mining industry arrived and money was to be made.”

Service is the cornerstone of Adkins’ career. At the Spring Institute, she sees herself as a mentor and servant leader.

“I’m passionate and enthusiastic about the work we do. I help our staff grow and learn and take ownership in our organization and its mission,” she says. “It’s also my job to create a positive environment where it’s fun to work and where accomplishments are celebrated.”

Even after acquiring more than one million travel miles, Adkins still values her first adventure in Japan. She says, “The tremendous opportunities we were afforded, the personal attention we received, and the relationships we forged have been invaluable.”