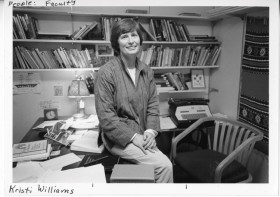 Kristi earned her undergraduate degree in English from Grinnell College. She went on to Brown University, where she earned a M.A. and a Ph.D. in English with a concentration in Victorian literature. After her graduate work, Kristi taught at Tulane University in New Orleans, where she met her husband, Ben Edwards. They moved to California and then to the Philippines, where Kristi taught at Ateneo de Manila University. The couple’s son, Jim, was born there.

After returning to the States, she joined Lewis & Clark, where her scholarly interests gradually became focused on the role gender, race, and class play in forming identity and in determining destinies.

Along with teaching English classes and courses in the Core program, Kristi became deeply involved in academic advising and supporting students who had questions or concerns about their academic program of study. She was particularly passionate about assisting students of color.

Kristi was a beloved colleague and friend to many, and countless students have benefited from her wonderful teaching and caring guidance. She is survived by her husband and son. 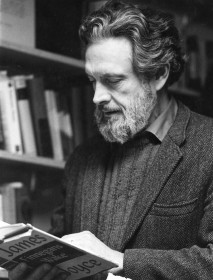 Ted Braun, professor emeritus of English, died due to lung complications following cancer surgery on March 6, 2013. He was 91.

Ted joined the Lewis & Clark’s English department in 1957 after serving as pastor of Meridian Church in Frog Pond, Oregon, now part of Wilsonville.

His passion for the world of ideas led him to study in several different fields, including philosophy, sociology, religion, and psychology. He earned his Ph.D. in English from
the University of Washington in 1967.

Ted’s intellectual breadth and experimental approach to learning were facets of his inspired teaching. For example, he taught a course in applied pastoral poetry in which he and his students planted a garden on an 8′ × 80′ plot on the south side of the
art building. As he and his students cultivated the garden, they grew together as a class, exploring a range of topics including the significance of gardens in poetry, myth, and scripture; the biological lives of plants; the Industrial Revolution; Marx’s theory of alien- ation; and ecological destruction.

In 1986, Ted retired from Lewis & Clark and moved with his family to Orcas Island— in possession of a wheelbarrow presented to him by his English department colleagues as a retirement gift.

Ted is survived by his wife, Alice, and their children—Erica, Enid, Marcus, and Tim —and their families. 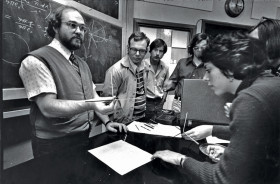 Bill was a graduate of Willamette University, where he majored in chemistry and earned his baccalaureate degree in 1960. He went on to earn his master’s (1963) and Ph.D. (1969) at the University of Illinois at Urbana-Champaign.

Bill joined the Lewis & Clark faculty in 1964 and served for 43 years before retiring in 2007. After retirement, he continued to serve for several years as pre-med advisor for undergraduate students. Bill was known as a deeply devoted teacher. His courses in analytic,   inorganic, and general chemistry were legendary for daunting standards and heavy workloads. At the same time, Bill devoted countless hours of time outside of class to helping students understand the material.

From the 1970s on, Bill made a point of engaging students in his research and having them present their work at regional conferences. Bill himself was very active in the Portland section of the American Chemical Society. Outside of the classroom, he was an avid gardener.

He is survived by his sister, Ivona Schacker, whose daughter, Sarah Schacker, graduated from Lewis & Clark in 1993.