The Rhythms of Egypt

At the far southern end of Cairo, about seven miles from Tahrir Square, the narrow alleys and traffic noise of the old city give way to broad, quiet tree-lined boulevards and traffic circles. This is Maadi, an international district built at the beginning of the 20th century. It was here, on May 22, that a diverse crowd packed the pews of St. John’s Church to hear a performance by Cappella Nova, a men and women’s choir from a liberal arts college in Oregon.

Then the power went out.

But Katherine FitzGibbon, assistant professor of music and director of Cappella Nova, refused to let a little darkness and heat—it was 95 degrees in Cairo that day—get in the way of the choir’s performance. The show would go on, by candlelight if necessary.“The minister at the church lit the candles, and we stood mostly in darkness,” FitzGibbon says. “I put my iPhone on the music stand with the flashlight feature aiming at me so the students could see my hands conducting.” 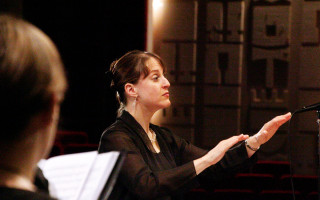 The Rhythms of Egypt

In the hot, dark room 7,000 miles from Portland, the choir sang the first phrase of the Shaker song “Peace”: “Peace unto Zion, peace to the faithful.”

“We sang this beautiful a cappella line, and right as we sang it, the power came on and remained on for the rest of the concert. It was a pretty spectacular moment,” FitzGibbon says. “I was almost a little disappointed, because it was so magical in the candlelight, but we didn’t object to the air conditioning coming back on, either.”

Cappella Nova toured regularly under the direction of L. Stanley Glarum from the 1950s through the 1970s (see related article on page 27), but until this year, the group had never ventured much beyond the borders of the United States. Indeed, it had been some 30 years since the choir had traveled at all. In 2010, FitzGibbon mounted a tour to Ashland and San Francisco over spring break. The following year, she organized a trip to Tacoma, Seattle, Bellingham, and Vancouver.

“On each of those tours we were able to connect with alumni in those different areas and also with prospective students,” FitzGibbon says. “Two of our current members joined the choir because they saw us perform when they were prospective students in the San Francisco area.”

FitzGibbon says touring reinforces the work the choir does on campus. “Any time you have the opportunity to go on a tour, it really strengthens the musicianship of the students, because they’re able to perform repertoire repeatedly and improve constantly,” she says. After the successful 2010 tour, she knew the next step was to go international. 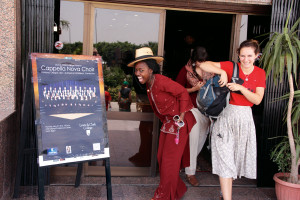 Zein Hassanein BA ’13 is an American-born tenor who grew up in Mali, Madagascar, and Egypt. He attended Lewis & Clark with the help of a vocal performance scholarship and was a first-year student on the 2010 tour. When FitzGibbon floated the idea of an international tour, he knew the perfect location.

“I really wanted to find a way to help people be able to understand how I grew up and the difference between the two worlds I’d been in love with my whole life: my life in Cairo and my school life … my Cairo family and my Lewis & Clark family,” Hassanein says. “So I went up to Kathy and said, ‘I don’t know how this all works, exactly, but I have some connections in Cairo.’”

With the help of Hassanein’s parents and a student tour committee, he and FitzGibbon set about figuring out the logistics of a 10-day, 4-concert tour and raising funds to make the journey possible. The choir received donations fromalumni (many of whom had toured with Glarum’s choir), faculty, and parents as well as a grant from President Barry Glassner’s Strategic Initiatives Fund.

“The Egypt tour presented a wonderful opportunity for our students,” says Glassner. “It was also an obvious fit with our commitment to international education and the rich history of our music program.”

The tour plan came together gradually, drawing heavily on Hassanein’s connections in Cairo. The singers and chaperones stayed for part of the tour with families of students at Hassanein’s high school, Cairo American College. Over the course of several months, FitzGibbon prepared the choir to sing a broad repertoire: American music—Shaker songs, African American spirituals, and 20th-century choral pieces—as well as songs in Arabic, learned with some help from Lewis & Clark instructor Julia Banzi’s Al Andalus Ensemble. (These last were well received by Egyptian audiences. “We’d start singing something in Arabic, and people would cheer,” FitzGibbon says.)

Hassanein’s father and mother, Adly Hassanein and Djodi Deutsch, worked on ground preparations. “My dad is an incredible character who has this ability to convince anybody of anything,” Hassanein says. His father persuaded the governor of Luxor to serve as the choir’s host, providing a concert venue, tours of archaeological sites in Luxor, and five-star accommodations in a resort along the Nile.

In the end, 30 choir members were able to participate in the tour, performing three times in Cairo: at St. John’s Church, Cairo American College, and El Sawy Culturewheel, a large cultural center built on a former landfill on an island in the Nile. The tour also took the choir 400 miles upriver from Cairo to the Conference Center in Luxor. In addition to performing, the singers participated in master classes with Egyptian composer Mohamed Abdelwahab Abdelfattah, whose composition “Aiyu” was among those performed by the choir, and John Baboukis, chair of the Department of the Arts at the American University in Cairo. There was also time to visit the pyramids at Giza, the Valley of the Kings, and Islamic Cairo.

For the Luxor concert, the members of Cappella Nova were special guests of the governor, and the show consequently had the most heavily Egyptian audience of the tour. Adly Hassanein served as translator. Amy Waters CAS ’15 says the concert was a transformative experience. 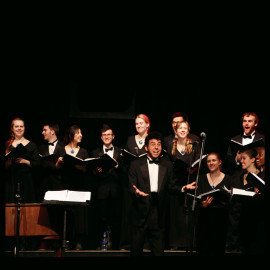 “After the show, a lot of people came up to tell various choir members and Kathy that they’d never heard choral music sung like that,” Waters says. “Two little girls—they were probably 10 years old—just loved the performance and were talking about wanting to come to Lewis & Clark when they got older.”

Both Hassanein and FitzGibbon say their favorite moment of the trip was not a public concert, but an impromptu, underground performance at the temple of Karnak in Luxor. Thanks to Deutsch’s connections to the American Research Center in Egypt, the choir were given a tour of areas of the temple that are currently under restoration and not normally accessible to the public.

“We got to go into this beautiful sacred space, and of course, being singers, we asked if we could have permission to sing in there,” FitzGibbon says. And so Cappella Nova sang “Lay Me Low,” a Shaker song, surrounded by 3,400-year-old stone.

“It was extremely hot and extremely sweaty,” Hassanein says, “but something about the space and the incredible sound of the stone chamber made us feel so connected. We felt like the pharaohs had built that space for us, just to be there in that moment and sing. It was a magical, timeless moment.”

“The students, the archeologists, and the chaperones basically  all burst into tears, it was so beautiful,” FitzGibbon says. “After we finished, Zein’s father said, ‘I think that the pharaohs have heard you, and I think they are very pleased.’”

Ben Waterhouse BA ’06 is a freelance reporter in Portland and communications coordinator for Oregon Humanities.