Crooning the Classics for Charity

After four decades, Rocky Blumhagen returned to the Lewis & Clark stage in June. Partnering with Susannah Mars and the Portland Chamber Orchestra, under the direction of Maestro Yaki Bergman, he performed his latest fundraising revue, “Oh, Those Gershwin Boys!”

The audience in Agnes Flanagan Chapel delighted in the medley of popular Gershwin tunes as well as Blumhagen’s witty commentary between numbers.

“There were times when I forgot about my performance. It seemed as though I was 21 years old again, transported through time and space to my college years at Lewis & Clark,” says Blumhagen, who missed commencement because he was overseas. “It felt like I was coming to graduate 40 years later.”

Blumhagen is an accomplished cabaret performer, big band singer, symphony soloist, and recording artist. In collaboration with music industry pros, he creates dynamic music revues to serve as fundraising vehicles for nonprofit organizations such as the Portland Chamber Orchestra, the Harold Schnitzer Diabetes Center at OHSU, and chamber music festivals throughout the Northwest.

“My goal is to help raise $1 million for charity,” says Blumhagen, “and I’m nearly halfway there.”

During his student days at Lewis & Clark, Blumhagen attended lectures and sang in the choir under the direction of Stanley Glarum. As a senior, he participated in an overseas study program in West Germany. As the term ended, he began touring with a group called Windstone, which included Gale Enger, who had been an assistant professor of music at Lewis & Clark. “We were on the road from 1973 to 1979, performing six nights a week in Germany, the United Kingdom, Canada, Nevada, and California,” he says.

Tired of hotel living and the nagging realization that fame was eluding him, Blumhagen returned to Portland to study radio and television production. He ended up working in radio for more than 15 years, first as on-air talent and then in sales and management. 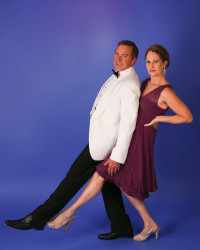 For the most part, Blumhagen had put his musical career aside. Then his partner, Richard Royse, asked him to give a concert for his 50th birthday. Blumhagen hadn’t sung in nearly 20 years. That concert rekindled his fire to perform again.

In 2003, while studying at the Palm Desert Center for Spiritual Living, he had a transformative dream. He envisioned his spirit leaving his body at death and walking into a spotlight with a 100-piece orchestra. Acting on the metaphysical law of manifesting your dreams, he took steps toward singing in the spotlight while he was alive and well.

“Five years later, I was singing my first Cole Porter concert with the Portland Chamber Orchestra,” says Blumhagen. In 2010, he recorded a CD of 13 songs: “Easy to Love: Rocky Blumhagen Sings Cole Porter”.

Blumhagen feels blessed to share his talents and plans to keep singing and performing as long as his voice and energy allow.

“The music, lyrics, and themes of my shows are timeless and leave the audience feeling uplifted and inspired,” he says. “The charities involved reap rewards on many levels, and the ripple effect of goodwill is immeasurable.”