Tending a Garden of Science Learners 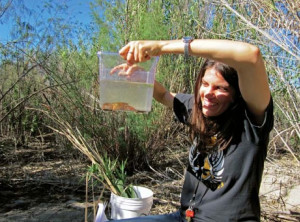 Two years ago, when students ventured outside Sierra High School in Fillmore, California, they encountered little more than piles of rock and bare dirt. Today, they are greeted with a variety of California native plants, including hummingbird sage, California poppies, manzanita, elderberry, yarrow, and deer grass—plus an array of local wildlife that have made this revived habitat their home.

Their science teacher, Laura Todis, heads the project. It grew out of a suggestion she received her first day on the job at Sierra. “I was told about an opportunity to write a proposal to the U.S. Fish & Wildlife Service’s Schoolyard Habitat program,” says Todis. “I worked with the district’s facilities director, and we ended up securing an $8,000 grant. It was awesome!”

Todis’ creative hands-on science projects and engaging teaching style have not gone unnoticed. During the last year, she has won two prestigious awards: the Amgen Award for Science Teaching Excellence, and Ventura County’s Teacher of the Year.

“The Amgen Award came with an unrestricted $5,000 grant for the school’s science program,” she says. “I plan to buy more professional equipment—graduated cylinders, chemicals, and microscopes—to upgrade the makeshift supplies we’ve been using in the lab.”

Ironically, Todis didn’t set out to be a science teacher. As an undergraduate in Boston, she majored in anthropology. When her college canceled its overseas study program to India and Tibet due to political unrest, she ended up studying sustainable development in Costa Rica instead. Inspired by the experience, she earned a master’s degree in environmental science. Her thesis focused on how environmental education could be more effectively delivered to Latino youth.

“Teaching allowed me to share my growing passion for the environment,” says Todis, who went on to earn a master’s in teaching from Lewis & Clark Graduate School of Education and Counseling. 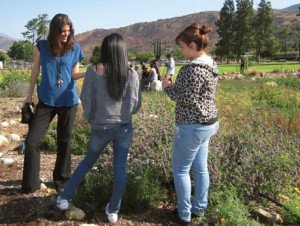  In 2010, Todis accepted her current position at Sierra, an alternative high school. “Students at Sierra are generally credit deficient and not on track to graduate on time,” she says. “Some haven’t attended school for a long time; others have attended sporadically. Many are struggling with substance abuse, legal, or family issues.”

Before working at Sierra, Todis taught at several well-funded private, magnet, and charter schools, where class sizes were small and innovation was encouraged. “It was exciting to bring the skills and lessons I learned in these environments to an alternative high school,” she says.

Regardless of the challenges her students face, Todis sets the achievement bar high. Field trips to the Santa Barbara Channel Islands and the Sespe Condor Sanctuary—along with restoration work on the Santa Clara River—provide hands-on learning and a deeper understanding of classroom lessons.

She tells her students, “This is your chance to go out into the community and show people you aren’t who they might think you are. You’re not stupid. You’re not troublemakers. Be respectful, ask good questions, and see yourselves as leaders.”

Based on her students’ success, Todis has created an elective course called Environmental Science, which ties together writing, math, art, and science into theme-based course units on such topics as arthropods, birds, endangered species, and marine biology. She is excited about the course’s potential—and that of her students.

“When we first started the habitat project, some of my students didn’t even know that plants had names,” she says. “Now they’re hiking on weekends and bringing plant cuttings, arthropods, and photos of snakes into the classroom to examine and study. It’s rewarding to see them so curious and fully engaged.”