A New Start-up on Campus

Lewis & Clark launches the Center for Entrepreneurship, an initiative to help students translate their liberal arts education into action.

What can you do with a well-rounded liberal arts education? Practically anything. But making one’s career aspirations a reality requires a mix of passion, expertise, acumen, and ingenuity—not to mention hard work.

And that’s where Lewis & Clark comes in with its new Center for Entrepreneurship. By teaching liberal arts students the principles and practices of entrepreneurship, the college will prepare them to create their own opportunities after graduation.

“People have always worried about what to be when they grow up,” says Tuajuanda Jordan, dean of the College of Arts and Sciences. “But today’s world is so different. You may not know the skill set you will need in the future. You may wind up creating your own job—and that’s entrepreneurship.” 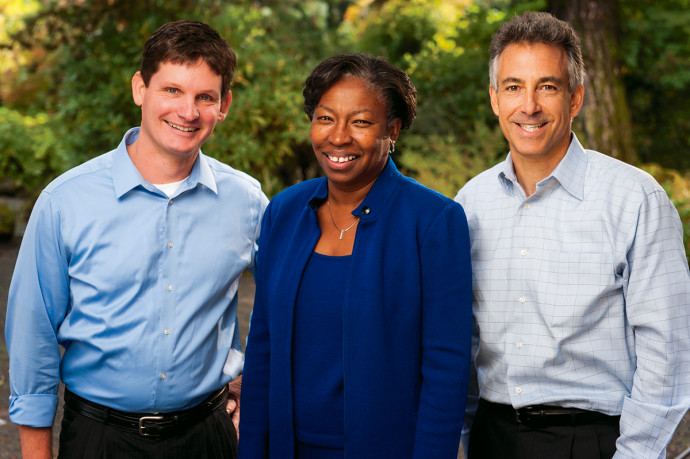 Brian Detweiler-Bedell, the center's academic director; Tuajuanda Jordan, dean of the College of Arts and Sciences; and Michael Kaplan, managing director of the center.

Already, the Center for Entrepreneurship is offering courses, workshops, and a campus-wide Venture Competition, with plans to roll out additional programming this year. The aim is to complement students’ liberal arts educations with additional tools, insights, and connections to support their transition from the classroom to entrepreneurial pursuits.

“We want students to connect the dots,” Jordan says. “We want them to translate the things they’re learning into what they want to do once they graduate. In my view, entrepreneurship is the natural extension of a liberal arts education.”

Hunter Meece, a junior majoring in religious studies, might well be the center’s biggest cheerleader, participating in campus entrepreneurship events, working as a summer intern for the center, and even co-founding a student entrepreneurship club.

“Entrepreneurship is part of everyday life,” Meece says. “Having the center will help students learn what their passions and capabilities are and give them the guidance to execute their aspirations.”

The study of entrepreneurship is growing in higher education but usually as a component of a business school or program. What makes Lewis & Clark’s entrepreneurship initiative distinctive is that it’s grounded in the college’s core strength: the liberal arts.

“We have an opportunity to create something special here at Lewis & Clark— in part because we don’t have a business focus,” says Michael Kaplan, managing director of the center and a business entrepreneur himself.

The center’s purpose is not to produce next-big-thing venture-funded entrepreneurs (though it might). Rather, the center is designed to provide students with additional knowledge and skills to succeed in whatever they choose to do in their careers. Not surprisingly, a strong streak of “social entrepreneurship” characterizes Lewis & Clark students; they aren’t motivated primarily by making money, but they are passionate about changing the world for the better.

“Entrepreneurship at its best is about creating important change that improves lives. If you can do this, it turns out valuable resources of all kinds tend to follow, and money is only one of them. Accomplishing entrepreneurial endeavors is almost always an interdisciplinary, highly collaborative adventure to imagine and develop better solutions for all sorts of things, profit or nonprofit,” Kaplan says. “We plan to provide our students strategic tools to turn their aspirations into realities.”

“This is about thinking entrepreneurially—innovating, creating, communicating, leading,” says Brian Detweiler-Bedell, the center’s academic director and an associate professor and chair of psychology. “It is putting the liberal arts into action.”

Amber Case BA ’08, inspired by an idea she got in anthropology class, started her own tech company while still an undergraduate at Lewis & Clark. Now a member of the college’s Board of Trustees, she says entrepreneurship is “essential for everyone.”

“You can’t just expect a job when you graduate,” says Case, who also volunteers as a mentor for entrepreneurially minded students. “You need something to differentiate yourself to survive and succeed, especially with so much uncertainty in the global economy.”

The center’s offerings are tailored not just for students interested in starting their own businesses or nonprofits. The skills students take away will be applicable whatever path they choose after graduating.

“Our graduates should be encouraged and prepared to bring an entrepreneurial spirit and habits of mind to their work, coming up with new ideas and collaborating with others to put them into action—even if they’re not capital-E ‘Entrepreneurs,’” Glassner says.

The concept of Lewis & Clark creating an entrepreneurship center had been percolating for years among alumni, professors, and students themselves.

The college tested campus interest in early 2012 with a “Winterim”—a weeklong winter break workshop on entrepreneurship that drew a number of distinguished speakers and presenters to campus. It was a huge hit with students who participated.

Lewis & Clark eliminated its business program and major some 20 years ago to concentrate on its core mission of the liberal arts and sciences. While the college isn’t planning to revive that program, there has been interest in something new and different. Not long after being hired as the college’s dean, Jordan convened a faculty committee to explore the idea of launching an entrepreneurship initiative. She recruited faculty from departments across campus and named the well-respected Detweiler-Bedell as chair.

The idea of creating a center was an entrepreneurial act in itself—ambitious but risky in its own way, too. Although change tends to come slowly in academia, the college was determined to move quickly to make its mark in this new and exciting arena. A few other liberal arts colleges have started entrepreneurship programs; however, each institution is unique, and there are no universal blueprints or models to follow. The committee had plenty of work to do and met regularly through the fall of 2012 to sketch an outline for what would become the Center for Entrepreneurship.

“The key was creating the center on our own terms, building from our strengths,” Detweiler-Bedell says.

The committee’s report endorsed a center that would work in synergy with the liberal arts, built around three key themes: leadership and enterprise, technology and innovation, and social entrepreneurship. Further, the center would extend beyond the undergraduate college to include faculty, students, and alumni from the law school and the graduate school as well. As such, the center does not belong to any particular school or academic department but rather to the entire institution.

As designed, the center will incorporate faculty from existing academic departments. And while there are no plans to offer a major in entrepreneurship, the center plans to offer a certificate upon graduation to students who complete a specified amount of coursework and cocurricular elements.

After Detweiler-Bedell was tapped to become the center’s academic director, a search was launched to find a codirector with business experience to complement the academic component. The college hired Kaplan, a successful businessman and an entrepreneur in areas ranging from energy to health care, to serve as the center’s managing director. Kaplan and Detweiler-Bedell lightheartedly refer to their roles as the center’s “cofounders.” Kaplan also continues to serve as the managing principal of a Portland venture capital fund he cofounded called Revenue Capital Management.

In the meantime, an anonymous donor gave the college $100,000 to start its first Venture Competition. Detweiler-Bedell led the effort, which saw more than 40 student teams pitch their business ideas with the prospect of getting mentoring and monetary support. (See “Ideas That Mushroom” on page 28.) After months spent developing their ventures, a trio of biology majors received the grand prize of $20,000 for their business to grow and sell oyster mushrooms as the Portland Mushroom Company.

This past fall, the center offered its first-ever credit course—Introduction to Entrepreneurship and Innovation—team-taught by Steven Goebel, assistant dean and director of the Business Law Program at the law school, and Michael Olich, associate professor of theatre. The two professors alternate classes, with Goebel offering students a “nuts-and-bolts” introduction to the business of entrepreneurship and Olich focusing on creative problem solving, such as developing business plans based on ideas students find in the New York Times.

“My bag is business, and Michael [Olich] takes on the creative end,” says Goebel, who before joining the faculty worked for a large corporation and started and sold a microbrewery. “The liberal arts is a great foundation, and I want our students to have the tools they need to succeed.”

Olich says he teaches the same concepts in entrepreneurship and theatre—only the context is different. “I teach students how to start from zero,” he says. “After students find an idea, we work toward conceptualizing and communicating that idea.”

In the spring semester, Goebel and Olich are reprising their introductory course, and Detweiler-Bedell and Kaplan are collaborating on their own course, Methods and Applications of Entrepreneurship. The latter class will include a “practicum” component, giving students the opportunity to participate in the 2014 Oregon Angel Fund (OAF). The fund has invested $17 million in 31 new companies since 2007. Students in this new course will work with OAF members to review and help select the start-up companies to receive funding.

In addition to an expanded slate of classes, the continued Winterim workshop series, and the second annual Venture Competition, the center will roll out a national mentorship program using video chat and specialized internships providing students with off-campus learning opportunities. A series of campus “fireside chats” featuring question-and-answer sessions with entrepreneurs and other experts are also in the works. Detweiler-Bedell and Kaplan are excited by the center’s potential and are eager to seize new opportunities as they arise.

Now that it’s established and off to a strong start, the Center for Entrepreneurship’s future is in the hands of the faculty and students of Lewis & Clark. As Jordan notes, “We’re free to be as creative as we want with the center.”