Lewis & Clark announces the winners of its first Venture Competition, a key element of the college’s entrepreneurship initiative.

The idea sprouted, not from a seed, but from a spore—Pleurotus ostreatus, to be exact, more commonly known as the oyster mushroom.

Ryan Bubriski BA ’12 got hooked on mycology during a college-sponsored trip to the Oregon coast, where he got to forage for mushrooms. A biology major, he wrote his senior project on truffle ecology, studying the symbiotic relationship between fungi and the forest.

After graduating with no obvious career plan beyond graduate work in fungal ecology, he hit on an idea: Why not go into the mushroom business? He knew that Oregon has an active mycological community, and that Portland has a booming “locavore” restaurant scene. “I just connected the dots,” Bubriski says. “I thought, ‘Man, it would be cool to start a mushroom farm.’” So he recruited a couple of fellow biology graduates, and the team got to work, growing oyster mushrooms in straw-filled plastic containers in a spare room of the house they share in Southeast Portland.

Not long after in early 2013, they learned that Lewis & Clark was launching its first-ever Venture Competition. The college was soliciting students and recent graduates to submit proposals for new business ideas. A first-place prize of $20,000 beckoned.

“Obviously, the money was a draw,” says Zac Tobias BA ’12, along with Will Fortini BA ’12, two of the three partners in what was to become the Portland Mushroom Company. “But what we learned through the competition and the people we met was worth so much more.”

The Venture Competition, funded by an anonymous donor’s $100,000 gift, helped to kick start the college’s Center for Entrepreneurship. Seen as a perfect complement to a liberal arts education, the new center aims to prepare graduates for careers as entrepreneurs.

“I’d been told a venture competition takes a lot of time and energy, and that you shouldn’t try to do it in your first year,” says Associate Professor Brian Detweiler-Bedell, the center’s codirector and chair of the psychology department.

But the donor who put up the money for the competition believed strongly in the effort. “He told me that entrepreneurship was all around Lewis & Clark but just under the surface and that all we needed to do was enable it,” says Detweiler-Bedell.

Turns out, that was exactly right.

The competition organizers expected maybe a dozen submissions and instead got 42. Business proposals came from current and recent undergraduates as well as graduate and law school students and ran the gamut of for-profit and nonprofit ventures.

A panel of judges streamlined the candidate pool to 11, with each team receiving $1,000 to $3,000 as seed funding to develop their ideas. The real payoff, however, was in the process. Each team got access to alumni mentors whom they met with regularly for counsel. Team members also attended four all-day workshops on various aspects of entrepreneurship over spring break. As a result of these experiences, they refined their business plans, learning along the way about the ins and outs of raising capital as well as the basics of accounting, marketing, and sales.

“We all had liberal arts backgrounds and biology degrees but very little business savvy,” Bubriski says. “We didn’t know what we were doing in terms of presenting ourselves to potential customers, how invoices work, or anything like that … so we got a crash course in business.”

“College is the perfect time to experiment with your ideas,” says Amber Case BA ’08, who mentored several of the teams in the competition. Case founded Geoloqi, a mobile location platform for enterprise, acquired by global mapping giant Ersi in 2012. The company’s core product was inspired by an anthropology course at Lewis & Clark.

“These students weren’t just learning how to start a company; they were learning how to be entrepreneurial,” Case says. “A liberal arts education helps you to think, but students also need tools that allow them to design their own lives instead of having their lives chosen for them by market conditions.”

After months of hard work, the field of competitors was narrowed to five finalists. These five teams represented an array of ideas that showcased, in various ways, the diversity of Lewis & Clark and its students.

Besides the Portland Mushroom Company, which aims to sustainably grow oyster mushrooms for restaurants and food markets, the other finalists were RootED Recovery, a behavioral coaching program for people with eating disorders; House of Tayo, an African-inspired clothing and accessories line; Kokonect, a mobile app aimed at connecting college students with shared interests; and Forge Portland, a shared, collaborative workspace for small nonprofit organizations.

“The competition was so helpful,” says Katie Fraser M.S. ’12, one of the four psychology and counseling graduate students who formed RootED Recovery. The idea grew out of Fraser’s master’s thesis, but its development was made possible by the competition. RootED Recovery provides an interactive website and a mobile app as well as in-person “recovery guides”—professionals and graduate students recruited and trained by the program—to provide ongoing support to people with eating disorders supplementary to treatment programs.

“We’re all socially focused. We did this to help people, not to make money,” says Alisha Blevins M.A. ’12, a partner in RootED Recovery. “Still, we needed to learn a new way of looking at what we wanted to do so we could make something that was sustainable.”

The competition was far from cutthroat— the various groups served as support and sounding boards for each other throughout the process, working more as collaborators than competitors. The groups made their final pitches to judges in October, with Portland Mushroom Company nabbing first place and $20,000 and RootED Recovery earning second place and $10,000. All the teams were stronger and smarter for participating in the competition and, as of this writing (winter 2014), all are still growing their businesses.

Meanwhile, the Portland Mushroom Company has used its new investment dollars to refine and expand its growing and pasteurization processes. The partners have expanded their operations by obtaining a specially outfitted storage container. They plan to move their whole operation to a permanent location this summer.

The graduates are excited about the potential market for locally grown oyster mushrooms—a versatile, year-round mushroom they sell as a tastier alternative to humdrum buttons and a less expensive option than seasonal varieties such as morels or chanterelles. The future is full of possibilities for the fledgling company—they’re still trying out their new equipment and facilities, and at the same time exploring new markets, new products, and maybe even franchising. And all of it grew out of a microscopic spore.

“Thanks to Lewis & Clark, I had a lot of time to learn about mushrooms before I ever got the idea of going into business,” Bubriski says. “I’m glad Lewis & Clark is moving into entrepreneurship now and that we were able to snag a bit of it before we got too old!”

The Center for Entrepreneurship is gearing up for its second Venture Competition this spring. 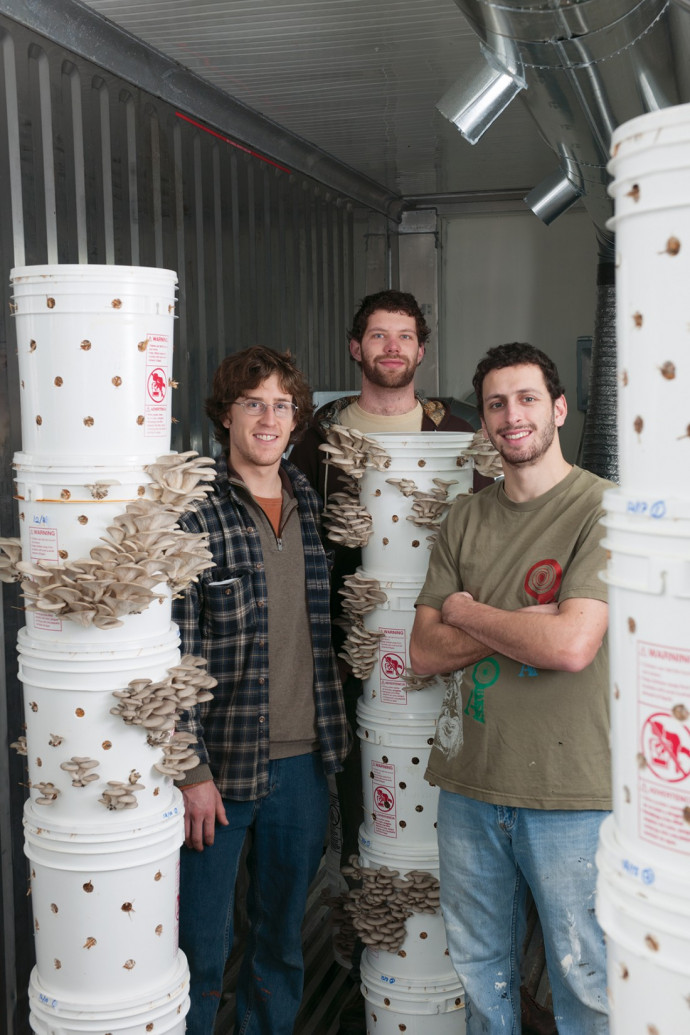