The Definitive Bibliography of William Stafford

In conjunction with the centennial celebration of Stafford’s birth, Watzek Library staff complete the most comprehensive bibliography of the poet’s work ever produced.

Fifty years ago, a librarian tackling bibliographic research required a good pen, a stack of 3x5 note cards, a reliable typewriter, a meticulous and patient nature—and, perhaps, a pipe.

In 1966, armed with these tools alone, James Pirie, then-director of Watzek Library, set out to write a comprehensive research bibliography of the works and correspondence of William Stafford, professor of English and soon-to-be poet laureate of the United States and Oregon. Pirie didn’t know at the time that he was beginning what would become a 47-year project, any more than he knew of the technologies that would eventually be employed to complete it—or the many hands through which it would pass on its journey to publication.

The book began as a kind of collaboration between Pirie and Stafford himself. As Stafford received journals and anthologies containing his poems, he brought them in boxes to Pirie, who would then file them and record their information on 3x5 note cards. Eventually, Pirie began compiling his bibliographic notations into a typed draft for a book. He continued to make additions even after his retirement from the college in 1982. When Pirie felt the work was complete, he sent a proposal to a publishing house. It was accepted, but the deal fell through, and Pirie’s meticulous work sat virtually untouched for decades.

That is, until 2010, when Watzek Library staff members Doug Erickson (head of Special Collections), Jeremy Skinner BA ’00 (Special Collections and Archives librarian), and Paul Merchant (Stafford archivist) took on the arduous task of collating and updating Pirie’s work and bringing it up to 21st-century standards. “Jeremy, Paul, and I had written two books together previously,” says Erickson, “so we had a good working process.” 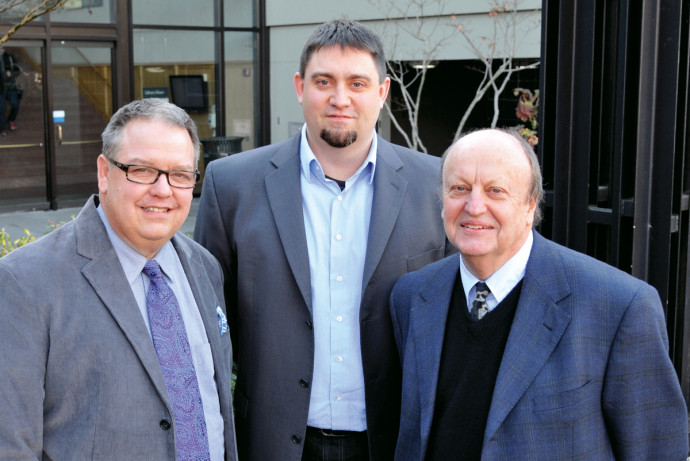 The project was not without its surprises. In spring 2011, when Stafford’s widow, Dorothy, was preparing to move out of the family’s Lake Oswego home, the Watzek team came by to collect any materials that hadn’t yet made their way into the archives. “We’d been at the house lots of times over the past 25 years,” recalls Erickson, “but we’d never been in the attic. And in the attic were all these things.” Those “things” were Stafford’s books, serial publications, and correspondence: 90 boxes’ worth. Says Skinner, “The bibliography outlines the quantity of material that was added after Pirie, but if I were to guess, I would say that about 50 percent of that came from the house in Lake Oswego.”

So Skinner, Merchant, and Erickson—plus a dedicated team of student workers—put aside the bibliography itself and set to work integrating those 90 boxes into the archives, which already included Stafford’s 20,000 pages of daily writings, material from his 60 published books of poetry, 100,000 sheets of correspondence, 20,000 photographs and negatives, and much, much more. Student workers were especially integral during this phase of the process, organizing, appraising, arranging, describing, and digitizing all the new materials. “The theme through this whole thing was student involvement,” says Erickson.

Unlike Pirie, the modern-day Watzek researchers were able to avail themselves of email, digital databases, and OCR (optical character recognition) software. But with a comprehensive project like this—and particularly with a subject like Stafford—even the latest and greatest technological advancements can do only so much to lighten the load. For example, one of Erickson’s tasks involved tracking down every single serial publication in which Stafford was published, many of which never survived to their second issue. “Bill was editor-friendly and people-friendly, and those qualities made him publisher-friendly,” says Erickson. “If someone from a knitting club in Michigan wanted a poem, he would give it to them. As a result, we had to go outside the traditional ways of finding information because we knew he was so prolific.”

And how does the finished project stack up against all that time and effort? One reviewer described the bibliography as “a browser’s dream,” something that Stafford enthusiasts of all stripes can enjoy, regardless of how entrenched they are in the field of academic research. Says Jeremy Skinner of the design, “I’m proud that it’s a reference book that looks nice and is easy to navigate. I’ve seen a lot of reference books that are difficult to use just because of the way they’re designed.” As a resource, the bibliography achieves what Pirie had always hoped it would: it is the definitive guide to Stafford’s writings. The index alone is as comprehensive a guide to Stafford’s body of work as exists anywhere.

When the William Stafford Archives became a reality in 2009, Paul Merchant described the project as “unique in its comprehensiveness,” an ambitious and successful attempt to “preserve the record of a complete poetic life.” The same could be said of the bibliography, which, after a 47-year journey, has finally reached publication, making the breadth of Stafford’s legacy available to Stafford lovers inside and outside Watzek’s walls.