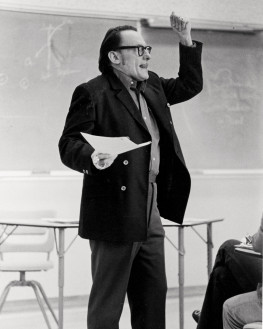 John “Jack” Crampton, professor emeritus of political science, died November 30, 2013, at Terwilliger Plaza in Portland. A member of the political science department from 1959 until his retirement in 1988, Crampton was a memorable teacher who influenced generations of Lewis & Clark students. After serving in the U.S. infantry in World War II, Crampton graduated magna cum laude from the University of Minnesota in 1947. After graduation, he worked as a newspaper reporter in his home state of Minnesota, then went on to earn his master’s degree in comparative government at Boston University and his PhD at the University of California at Berkeley in 1958. After teaching at a number of schools, including Colorado College, the University of California at Santa Barbara, and the University of Washington, he joined the Lewis & Clark faculty in 1959.

Crampton had wide-ranging interests as a teacher and scholar, including U.S. government, comparative politics, U.S. military policy, and civil rights. His interests did not stop, however, at the boundaries of his discipline. Don Balmer, Dubach Professor Emeritus of Political Science, characterized his teaching in this way: “His lectures and class sessions were jam-packed with the very latest research data and broadest selection of relevant materials—poetry, novels, paintings, photographs, recordings.”

Students found his courses challenging and sometimes life-changing. His tough grading was legendary, as was his serious engagement of student work. “Jack Crampton will be appropriately remembered for setting high standards for himself, his students, and his colleagues,” says Balmer.

Jack is survived by his wife of 64 years, Georgia Ronan Crampton.

A 1937 graduate of the law school, Holman served in the Navy in World War II and was a practicing attorney and trial judge before being elected to the Oregon Supreme Court in 1965. He served on the state’s highest court until 1980. 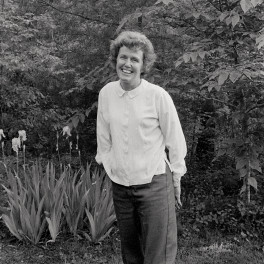 Starting with her husband William Stafford’s appointment to the English department in 1947, Dorothy’s presence on Palatine Hill contributed to the positive evolution of the college over the last half-century. Dorothy was a friend to Lewis & Clark’s administration, trustees, faculty, and staff. She also taught many of the children of these families as an elementary school teacher in the Lake Oswego School District. Dorothy and Bill raised four children together: the late Bret Stafford; Kit Stafford BA ’75; Barbara Stafford Wilson BA ’79; and Kim Stafford, who has been a member of the graduate school faculty since 1979, founded the Northwest Writing Institute, and serves as literary executor of the Estate of William Stafford.

Born in Nebraska, Dorothy graduated from La Verne College in the early 1940s with a bachelor’s degree in education. During World War II, Dorothy met her future husband, William Stafford, while visiting a camp for conscientious objectors near Santa Barbara, California. Dorothy and Bill immediately connected over their love of literature. The couple married in 1943.

In 2008, Dorothy was instrumental in the generous donation of the William Stafford collection to Lewis & Clark. The archive represents the literary life of one of the most influential American poets of the last half of the 20th century. Its richness benefits both Lewis & Clark students and Stafford scholars.

Always the charming ambassador, Dorothy carried herself with grace, wit, and compassion. In recognition of her many contributions to Lewis & Clark, the college awarded her an honorary degree at commencement in spring 2013.

Adapted from a reflection by Doug Erickson, head of Special Collections and the William Stafford Archives at Lewis & Clark. He has been a friend of the Stafford family for more than 20 years.