Six Lewis & Clark alumni received prestigious National Science Foundation (NSF) Graduate Research Fellowships for demonstrating promise as leaders in their fields. The NSF offers fellows three years of support for graduate studies, investing in the education of outstanding students who have the potential to contribute significantly to research, teaching, and innovations in science and engineering.

I worked for three summers through the Rogers Science Research Program with Professor of Chemistry James Duncan studying the mechanisms of several molecules using computational chemistry. We investigated these reactions using a methodology that studied the molecular orbitals used in each reaction.

I have been teaching high school chemistry for the last four years and hope to teach at the collegiate level after completing my PhD The availability of research opportunities and the support given by my professors has been so important in helping me reach these goals. In particular, Professor Duncan gave me many opportunities to conduct high-level research, including being a part of deciding the project direction and creating new research ideas. This has been such an integral part of my success.

In addition to the professors, the style of learning—where students are encouraged to speak their minds, take a larger role in their education, and are supported in the true liberal arts experience (as seen in my double major)—has helped me to be more creative. The confidence and resilience that was encouraged in all my classes has allowed me to be successful, and I hope in the future to have this same impact on students’ lives that my professors have had on me.

I worked on a number of projects at Lewis & Clark. I wrote an honors thesis in mathematical logic in which I formalized a fragment of special relativity using a specific first-order language. I proved a small result in the area of math called dynamics about Cantor sets and iterated functions. While studying abroad in the Budapest Semesters in Mathematics program, I worked on a problem in additive combinatorics. In the completely unrelated field of geomorphology, I published a paper about the effects of in situ tree root growth and decay on hillslope sediment transport.

In the immediate future, I am going to walk, ski, and packraft from the southernmost to the northernmost point of Iceland. My long-term plans involve getting a PhD, becoming a professor, and living somewhere near mountains and rivers. Lewis & Clark provided me with a solid education and a network of mentors who have helped me work toward my long-term academic goals. It housed a community of lovely, supportive people and allowed me to explore many wild places in the Pacific Northwest.

There were several wonderful classes at Lewis & Clark that sparked my interest in pursuing the field of clinical psychology. One that immediately comes to mind was a senior level capstone course in developmental psychopathology offered by Associate Professor of Psychology Janet Davidson, who was also my undergraduate mentor. Janet is a fantastic teacher and is deeply passionate about imparting knowledge about risk and resiliency processes to her students. As a mentor, Janet made herself extremely accessible to me to discuss questions I had about class topics and potential future career interests. She certainly was a major influence in my decision to pursue the field of psychology at the doctoral level.

My senior capstone paper focused on the association between ADHD and substance use among college students, a topic that laid the foundation for the research I am conducting now in graduate school.

I am so thankful for my undergraduate experiences at Lewis & Clark. Looking back on my time, I am grateful for how dedicated and passionate several of my professors were. I would like to extend a special thanks to Davidson, Professor of Psychology Thomas Schoeneman, and Associate Professors of Psychology Jerusha and Brian Detweiller-Bedell, among others, for providing me so much guidance during my early foundational training. 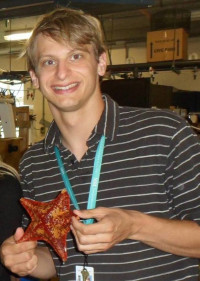 My thesis research, under the guidance of Professor of Physics Bethe Scalettar and Dr. Robert B. Pamplin Jr. Professor of Science Janis Lochner, was aimed at understanding how neurons transport proteins involved in memory formation. These proteins must be delivered to synaptic contacts between neurons for efficient synaptic transmission to occur. Synaptic transmission is often impaired in neurological disorders, such as Alzheimer’s, so it is important to understand how the various components of a cell are working together to better treat these diseases.

Studying cells gave me a deep appreciation for how something so small could be so intricate, composed of many interacting parts. Applying tools from physics and engineering to “deconstruct” this complexity is becoming more common in modern cell biological research. My motivation to apply to biomedical engineering PhD programs came from a desire to merge my interests in biology with the quantitative skills I gained studying physics at Lewis & Clark, and to apply this knowledge in the context of human health and disease. I hope to eventually run my own lab, where I can continue to study how cells move and learn how to control cancer progression.

Teaching and mentoring future generations of scientists is another important aspect of running a laboratory, and one that interests me in particular. I worked in the Math Skills Center and as a teaching assistant at Lewis & Clark, and I am excited to continue to engage in these opportunities in graduate school. My academic career has benefitted greatly from the quality of the mentors and instructors I had at Lewis & Clark. I hope to pass my enthusiasm on to my future students! 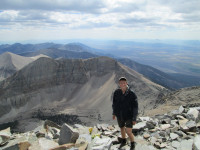 I worked with former Assistant Professor of Biology Peter Kennedy to characterize a diverse group of fungal symbionts associated with a deciduous tree common to western North America, Arbutus menzeisii (madrone). We investigated patterns of diversity within fungal communities associated with these trees and their coniferous neighbors in southern Oregon, and the potential for A. menzeisii to convey regenerative effects on forest dynamics via this important fungal community. This research has implications in forest management, conservation, and a general ecological understanding of plant-fungal interactions.

My current position as a researcher in the fungal ecology lab of Assistant Professor of Biology Kabir Peay at Stanford University will be wrapping up at the beginning of this summer. After that I plan to (in no particular order) be a lumberjack for the United States Forest Service, attend grad school, ride freight trains to places I love, spend more time with my family, and continue to learn more about fungi. Lewis & Clark provided me with valuable one-on-one time with professors and researchers that I now consider my colleagues. The research experience I received and the contacts I established I still take with me today, and are the basis of research I wish to carry out in the future. 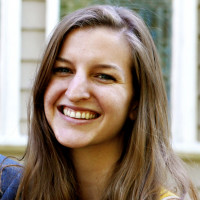 I worked in Professor of Biology Greg Hermann’s lab, where we studied the formation of cellular compartments called lysosome related organelles (LROs). LROs are associated with several human diseases, such as Hermansky-Pudlak Syndrome, so our findings have important implications for disease. I adored my time in the Hermann lab. It was there that I truly fell in love with biology and developed the independence and critical thinking skills necessary to carry out experiments and pursue a career in the sciences.

I was a bit of a late bloomer when it comes to science. I was initially interested in the arts and psychology, and it wasn’t until my sophomore year that I really discovered biology. Knowing literally nothing about the sciences, I took Greg’s Intro to Cell and Molecular Biology course. Greg’s enthusiasm and phenomenal teaching launched my ever-growing interest in biology. Lewis & Clark is full of amazing mentors—Greg, as well as Associate Professor of Psychology Yueping Zhang and Dr. Robert B. Pamplin Jr. Professor of Science Janis Lochner—and I feel very lucky to have worked with them during college. In addition, the teaching at Lewis & Clark focuses on developing critical thinking skills and approaching subjects in novel ways, not simply memorizing random facts. The development of these skills has proven exceptionally useful outside of school.

I am currently studying the genetic basis of sleep using fruit flies as a model system. While the science itself fascinates me, I find that I am most excited when reading or teaching others about science. I’ve become increasingly interested in data visualization. It’s this beautiful merge between the arts and sciences that aims to achieve the fundamental goal of explaining the world around us using data in graphical form. I am working hard to gain the expertise necessary to create effective visual representations of data and scientific concepts, and hope to craft a career centered around it.