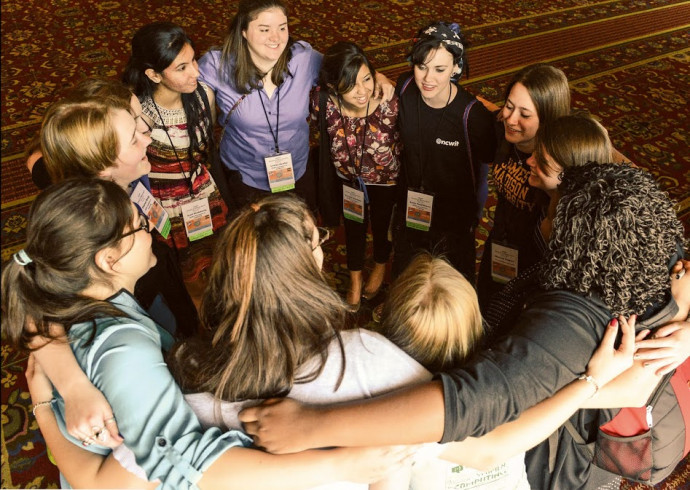 Board of Alumni member Ruthe Farmer BA ’92 works tirelessly to make sure young women have the encouragement, support, and opportunity to succeed in the male-dominated world of information technology. Last year, the White House honored her for her efforts as a Champion of Change for Tech Inclusion.

She calls herself a professional feminist. The young women she mentors refer to her as their career fairy godmother. The White House last year named her a Champion of Change.

Each label is a well-earned source of satisfaction for Board of Alumni member Ruthe Farmer, BA ’92. As the chief strategy and growth officer for the National Center for Women & Information Technology (NCWIT) and the former national manager of technology and engineering education for Girl Scouts of the USA, Ruthe has dedicated her career to aggressively expanding opportunities for girls in technology. 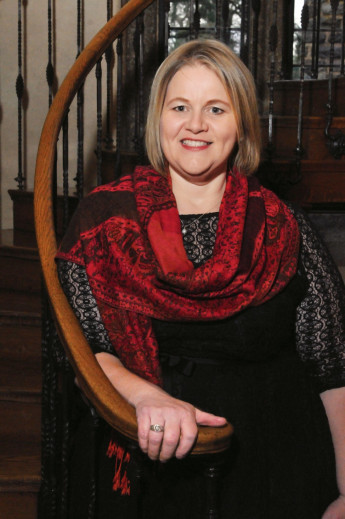 For the U.S. workforce, the problem is significant: With women all but missing from the technology equation, there are not enough people in the pipeline to fill the jobs projected in this field. The U.S. Department of Labor projects 1.2 million computing- related job openings in the U.S. by 2022, and a workforce capable of filling only 39 percent of those jobs with U.S. computing undergraduates. Outsourcing jobs to other countries is one solution. Encouraging more young women in our own country to pursue and succeed in computing, Ruthe firmly believes, is a better one.

It’s better not only for the U.S. economy, which would keep more family-wage jobs at home, but also—and more to the heart of Ruthe’s passion—it’s better for girls. “I want women and girls to have access to the jobs that pay well and that give them independence and freedom,” says Ruthe. “I also want to live in a world that is created with the representation and participation of the entire population. The technical world that we all experience today is largely created without the input of women and minorities. So not only are we not designing the best solutions—we’re not even solving all the problems.”

As a case in point, Ruthe recounts a hackathon, called Hack the Kitchen, sponsored last year by Campbell’s Soup. Only one team at the event—a team formed by a young woman from NCWIT’s Aspirations in Computing program—had women on it. “The whole purpose of the competition was to create apps to help women buy these products,” says Ruthe. “Wouldn’t it have made sense for teams to include women?” For the record, the girl-powered team was the only student team to make it to the finals.

Ruthe traces her roots as a feminist back to her college days at Lewis & Clark. A student of communications, German, and art, she found herself one semester in Jean Ward’s Rhetoric of Women class. “I was shocked, as a sophomore in college, to be learning the history of women in America for the first time,” says Ruthe. “I’d never even heard of most of the women we were studying. Why were they missing from my K-12 education?” Ruthe fired off a list of women’s names to her younger sister and demanded that she ask her social studies teacher why she hadn’t learned anything about them. The teacher’s response: Maybe we could do a unit on presidents’ wives.

That experience simmered in the back of her mind while Ruthe pursued a career in marketing and communications. Then in 2001, a job opened up with what is now the Girl Scouts of Oregon and Southwest Washington. It paid less than half of what she’d been making before, but it offered the chance to go pro as a feminist. She jumped at it.

Shortly after Ruthe signed on, the national Girl Scouts office received a grant from Intel. The company needed help enticing girls to create engineering projects for the Intel International Science and Engineering Fair, the largest international precollege science and engineering competition in the world. With a $26,000 slice of that grant, Ruthe’s local office prepared to hire a consultant to help out, but Ruthe said, “Oh no, we’re not hiring anybody. I’m doing this.”

Ruthe’s shoestring pilot program became the testing ground for what is now Intel Design and Discovery, a nationwide program that takes middle school girls through the entire design process, from product conception to design, testing, and marketing. “Ruthe’s enthusiasm, vision, and creativity played an essential role in that program’s success,” says Wendy Hawkins, executive director of the Intel Foundation. “The program continues to be used in the U.S. and elsewhere more than a decade later.”

That program launched Ruthe to the Girl Scouts of the USA headquarters as the national manager of technology and engineering education. Flag now firmly planted in the gender-equity-in-technology cause, Ruthe had found her mission.

In 2004, the National Center for Women & Information Technology opened its doors with a similar mission, and Ruthe was soon collaborating with the group as its Girl Scouts representative. At NCWIT, she found a passionate group of kindred spirits, and after completing an MBA in social entrepreneurship at Oxford University’s Said Business School in 2008, Ruthe joined the NCWIT team full time. 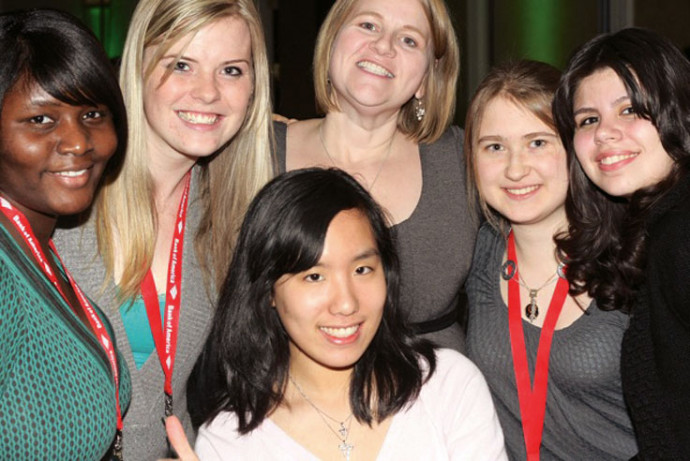 At the time, a lot of people had started working to increase recruitment and retention of women in technology, “but they were all working in isolation,” says Ruthe. “We created a community for them.” Today, through NCWIT, “The K-12 people are talking to the university people, who are talking to the corporate people, and the whole pipeline is coming together to address these issues in concert.”

Helping to build and support that professional community has been one of Ruthe’s most significant achievements. But the community for which she is best known—the one that keeps her motivated and energized every day—is the community of the young women themselves.

Ruthe is the driving force behind Aspirations in Computing, an NCWIT program for high school girls with aptitude and interest in computing. It starts with recognition. Technically inclined high school girls are encouraged to apply for the Aspirations Award each fall. Last year, some 2,200 students applied, and nearly 1,400 awardees—including 38 from Oregon and southwest Washington (see related article on next page)—were presented with awards and inducted into the Aspirations in Computing community.

“Studies have shown that for nearly every high-achieving minority out there, there is a significant adult who offered encouragement,” says Ruthe. “We want to be that trusted source of encouragement for young women in technology. Winning this award sends a clear message: You are good at this, and we think you should continue doing this.”

The award itself, she hastens to add, is not the culmination of something. It’s the beginning. Young women who win the award are welcomed into a national network of like-minded peers, supporters, and sponsors who give them countless opportunities and continuous encouragement to stick with it. “And we stick with them,” says Ruthe. “We do everything we can to make sure these young women never feel isolated. Because that is the real crux of the issue.”

Beyond gender bias, beyond the unflattering stereotypes, beyond the hurdles of self-doubt and the dearth of female role models, a major reason why young women avoid or quit engineering and computing programs is the feeling of utter isolation. “Each year, on average, around 8,000 women in the whole country get computer science degrees, compared to about 35,000 men,” says Ruthe, “so the chances of them having female peer groups in their classes are slim to none.” Through Aspirations, Ruthe gives them a community of peers that is—there’s no other word for it—peerless.

“Ask most recent grads with computer science degrees today, and they probably know fewer than 10 women with the same degree,” says Ruthe. “Ask a young woman in our Aspirations community, and she knows thousands. Our community is networking on Facebook, on Snapchat, on Instagram, on Twitter—they’re everywhere, and they’re talking to each other all the time.”

Ranika Kejriwal was the only girl in her Charlotte, N.C., high school computer science class when she received the Aspirations Award six years ago. “That recognition and support gave me the confidence to move forward in this field,” she says. “Every time I thought about changing my major, someone on our Facebook group encouraged me to stay. Every time I started a new internship, Ruthe connected me to women who were leaders in the company. When we call her our career fairy godmother, it’s really true—she’s always there for us.” For Ranika, the support has been invaluable. Today, she is completing an accelerated master’s program at Carnegie Mellon University, where she completed her undergraduate degree in electrical and computer engineering. She joins the Xbox engineering team at Microsoft this fall.

Ten years into NCWIT’s existence, Ruthe is proud to see the first waves of Aspirations Award recipients now mentoring younger peers and coming up with new ways to expand the pool of young women in technology. Several started their own outreach efforts, inspiring a new NCWIT program called AspireIT, which offers grants to Aspirations recipients to develop computing opportunities for younger girls. Another group proposed an Aspirations-style program for college women. Ruthe just landed a $1 million sponsorship to fund that program.

“These energized young women are extending the impact of my work well beyond anything I could ever do myself,” says Ruthe. “They are my daily source of inspiration.”

In Ruthe’s line of work, rewards of all types come daily.

Last July, Ruthe was honored by the White House as one of 11 Champions of Change for Tech Inclusion, part of President Obama’s initiative to better prepare American graduates for the demands of a high-tech economy. That was a high-profile achievement.

More recently, a quiet, petite girl posted on the NCWIT Facebook group: “I know it’s a small thing, but after weeks of lobbying, I finally persuaded the student store to carry computer science T-shirts in girls’ sizes.” “That was no small thing,” says Ruthe. “It was huge. She has taken away the sting of that for every other young woman after her. People don’t quit things because of one giant incident of discrimination; they quit because of the collective weight of one incident after another after another. That T-shirt is a statement.”

Ruthe is full of stories about her girls. She’ll tell you about Courtney, who has been building unmanned aerial drones for agricultural applications and is seeking an internship in aerospace—at 16. She’ll tell you about Kylie, who drove 13 hours to pre-sent a flash talk at a computing conference, persuaded her college to fund the trip, talked the school into joining NCWIT, and formed her school’s first Women in Technology group—all in her first two months as a freshman. “All of these young women are stellar,” says Ruthe. “Stellar.”

She could go on about them all day, but she’s got work to do. There are texts to return, tweets to send, messages to post. In a world of breakneck technological change, Ruthe is maximizing every tool to mass mentor a new generation of women and to make sure they claim their rightful place in defining that world’s future.

Ellisa Valo endured three semesters of punch-card programming in the 1980s, which might explain why she’s a writer today. She supports girl power everywhere.