In Conversation With Justice Sonia Sotomayor

Her visit to campus on March 12 marked the fifth by a member of the U.S. Supreme Court since 2008. 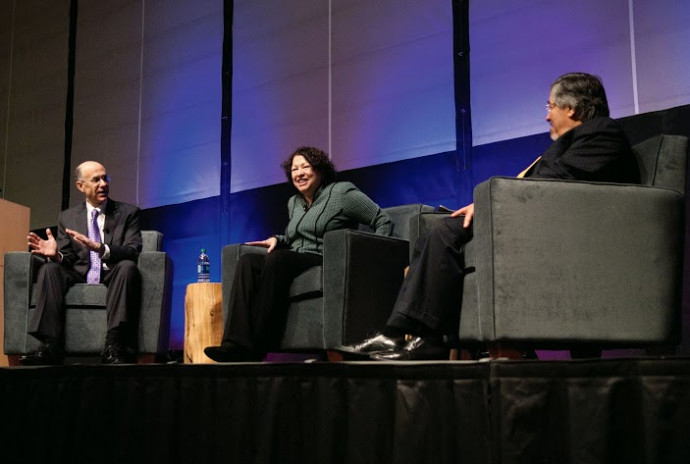 In keeping with her warm, approachable demeanor, U.S. Supreme Court Associate Justice Sonia Sotomayor delivered most of her remarks at Lewis & Clark not from a lectern but from an armchair. During her hour-long conversation with the audience—which included distinguished judges and other members of the Oregon legal community as well as Lewis & Clark students, faculty, and staff—Justice Sotomayor described her inspiring journey from the Bronx to America’s highest court.

Justice Sotomayor’s visit fulfilled a promise she made to Dean and Jordan D. Schnitzer Professor of Law Robert Klonoff, who was one of her 1979 Yale Law School classmates. Klonoff describes Justice Sotomayor as a “rock star,” an icon, and an inspiration to everyone. “She represents the true American Dream,” he says.

Klonoff and another Yale classmate, Rudy Aragon, senior partner at White & Case in Miami, Florida, moderated the event. After the three reminisced about their law school days, and after Klonoff and Aragon posed several questions to the Justice, they turned the microphone over to the audience. It wasn’t long before Justice Sotomayor was up and navigating through the bleachers, responding to queries from student participants and pausing frequently to let people take photos. She later returned to the stage to finish her remarks. 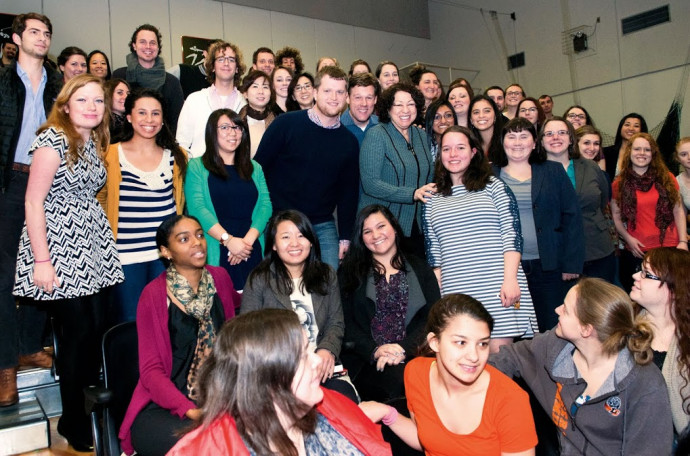 Justice Sotomayor took questions and posed for photos among an enthusiastic crowd in Pamplin Sports Center.

She offered this advice to young lawyers: Stop spending so much time worrying about the future. Instead, focus on the journey. Fill your path with challenges that will keep you learning and growing. “There are no fatal mistakes. The path you create is filled with options.”

She encouraged students to explore as many of those options as they could. “Take economics or a religion course. If you don’t understand the underlying tenets of religion, then you will not understand the motives behind war.”

Justice Sotomayor also shared her experiences being a minority leader. She is the first Hispanic and third woman to be appointed to the Court.

“As a woman hoping to have many leadership roles in the future, how do you find the balance between standing up for yourself and being assertive, and knowing when you need to just compromise?” asked Melia Manter, a junior in the College of Arts and Sciences.

“There is a lot of inequality in this world,” Justice Sotomayor responded as she scanned the audience and met the eyes of many. In law school, she recalled, Aragon used to tell her that she argued like a man. “I was not sure if he was insulting me or complimenting me,” she said. While her assertive approach certainly comes in handy, she said, “it isn’t a style to use all the time.”

She explained why diversity in the law is so important and expressed disappointment over the current lack of it on the Court. True diversity, she said, extends beyond differences in gender and color to encompass a broader range of backgrounds. The current Court does not have anyone from the Midwest, any Protestants or Muslims, nor anybody who worked as a criminal defense lawyer, she pointed out. “We need that kind of thinking to enrich the Court.”

Justice Sotomayor also encouraged lawyers to remember the purpose of their work—helping people—and to be proud of their profession. When lawyers forget their purpose, she said, the public sees the entire legal profession in a poor light, and that leads to low self-esteem among practitioners. In her view, “we don’t toot our horns enough.” Lawyers should be proud, she offered, because they help shape the course of history and develop the country.

Her biggest surprise when she joined the Court, she said, was finding how hard the job was. She remembered that a former colleague joked that it should be a breeze hearing fewer than 100 cases a year, as Justice Sotomayor had heard double that as a circuit court judge. But Justice Sotomayor explained that, because the Court takes mostly cases in which there has been a circuit court split, the questions presented usually are difficult and there are substantial arguments on both sides. In the end, “even when I think my decision is right, I know there is a reasoned side that lost,” she said. 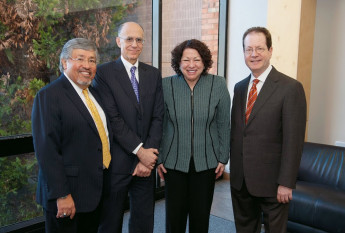 In attendance were some of Oregon’s most notable members of the legal community, including Chief Judge of the Oregon Court of Appeals Rick Haselton, also a former classmate of Justice Sotomayor; Judge Diarmuid O’Scannlain, U.S. Court of Appeals for the Ninth Circuit; and Justice Rives Kistler, Oregon Supreme Court. There were also multiple Oregon circuit court judges present.

Angela Rico, who has applied for admission to the law school, attended the event as a guest of Senator Betsy Johnson JD ’79. Rico also saw the Justice speak earlier in the week. Justice Sotomayor recognized Rico, stopped to give her a hug, and posed for a picture with her. As an immigrant from Colombia, Rico said, “this was a dream come true. I never thought that I would have the chance to come to Oregon, let alone meet the first Latina Justice.”

Before the event, Justice Sotomayor met with law school faculty and staff over breakfast. She circled the room, shaking hands with those in attendance. She reminded professors that there is no one model for creating the best law clerk and shared how her experiences with trial work help her on the Court. When it came to reminiscing about law school days with Klonoff, she smirked. “He hasn’t changed a bit—except maybe the ’fro and facial hair,” she said. Justice Sotomayor also toured the law school campus and stopped to meet a number of students who were walking to class.

The Lewis & Clark event concluded Justice Sotomayor’s first visit to the Portland area, which included stops with Klonoff and two fellow classmates at some of the city’s iconic locations, as well as Multnomah Falls and Hood River. She also went to Powell’s Books, where she signed copies of her recently published memoir, My Beloved World. Although she tried to keep a low profile, people throughout the city recognized her; at one point, an entire restaurant full of diners gave her a standing ovation. And everywhere, said Klonoff, Justice Sotomayor made an effort to gather names so she could send thank-you cards.