Jocelyn Stokes slips on a long-sleeved shirt, heavy khakis, leech socks, and sturdy rubber boots. She dons a wide-brimmed hat and heads into the jungle to observe and photograph once traumatized sun bears discover their instinctive forest skills.

Alone with her equipment, she carries stones in her pockets and an extra metal tripod to scare off marauding monkeys and orangutans. “Orangutans can be quite threatening when they approach me with the intent of snatching my gear,” says Stokes, who’s grown accustomed to picking a leech or two off her skin at the end of each day. She takes these challenges in stride, focusing instead on the bears.

In 2013, she launched the Survival of the Sun Bears awareness campaign and documentary film project through her media company, Wild & Stoked Productions. She collaborates with the Bornean Sun Bear Conservation Centre located in Sabah, Malaysia, on the northern tip of the island of Borneo—a critical hotspot for biodiversity.

According to Stokes, nearly 25,000 kilometers of sun bear rainforest habitat has been converted into palm oil plantations. “This area is increasing daily,” she says. “Protecting sun bears is intrinsically linked to conserving habitat for thousands of other amazing species.”

The smallest of all bears, males weigh 60 to 150 pounds, females 40 to 80 pounds. Excellent climbers with extremely long claws and tongues, they forage in treetops for insects, honey, and wild fruits. Black to brown in color, they get their name from a yellowish chest mark resembling a rising or setting sun. Each chest mark is unique.

Unfortunately, sun bears have garnered some unwanted attention. “Poachers kill mothers for their gallbladders, paws, teeth, and other body parts. Cute charismatic babies are orphaned and kept illegally as pets,” says Stokes. “When they start chewing and clawing everything in sight, they’re often chained down and kept in tiny cages.”

“Sun bears are the least-known, least-studied bear species, which makes it extremely difficult to garner attention for conservation efforts”Jocelyn Stokes ’07

Committed to raising awareness, Stokes is making a documentary about the bears. It will debut in fall 2014 at the grand opening of the conservation center. She’ll enter an extended version in film festivals and plans to tour U.S. schools and universities to garner support.

“I use my photography to tell stories that convey powerful messages and promote wildlife conservation,” she says.

While at Lewis & Clark, Stokes majored in art, minored in communication, and served as photography editor of the student newspaper, the Pioneer Log. After graduation, she was employed in photography studios but found the work unfulfilling. Wanting to gain experience with wildlife, she traveled to South Korea and Southeast Asia, where she contacted multiple conservation organizations offering her photography services.

In 2009, she found herself at the Bornean Sun Bear Conservation Centre, composing photographs and informative biographies of its rescued sun bears. “Their loud barks terrified me at first,” she says. “Yet I was captivated when I looked into their eyes and saw such deep intelligence. Their charm and the plight of their survival changed my life forever.”

Motivated to be a knowledgeable agent of change, Stokes is currently earning a post-baccalaureate in fisheries and wildlife management. “Sun bears are the least-known, least-studied bear species, which makes it extremely difficult to garner attention for conservation efforts,” she says. Her research involves observing and evaluating sun bear behaviors during their rehabilitation in the center’s forest enclosure. The preliminary database she’s creating will aid the design of a reintroduction program and further the understanding of sun bear behaviors for optimal rehabilitation management.

“It’s indefensible to me that some of the oldest forests in the world are being chopped down for palm oil production to make frozen pizza and peanut butter,” she says. “Palm oil is now in more than 50 percent of all packaged goods and cosmetics. We need to become conscious consumers and stop supporting the unsustainable conversion of Bornean rainforests.” 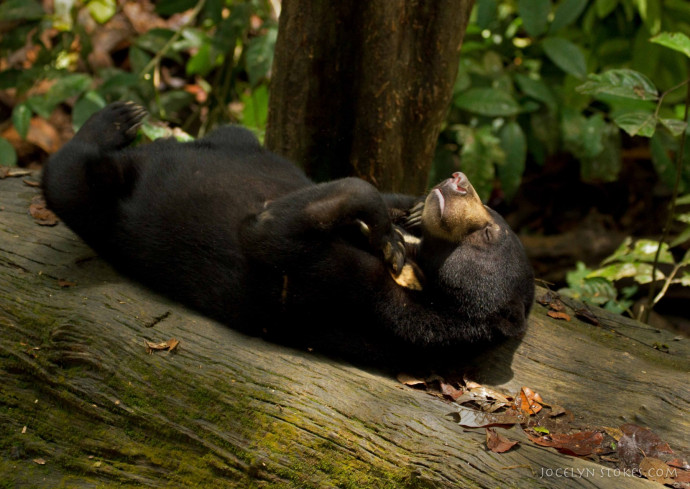