Every September, the Bicycle Transportation Alliance sponsors a friendly competition among local business to see whose employees bikes to work most often. Last year, 146 Lewis & Clark faculty, staff, and students from all three schools completed 654 rides for a total of 8,324 miles.

With their Palatine Hill-hardened quads, our riders this year hope to push that last number even higher. Resources like Metro’s “Bike There!” map and the TriMet bus system, along with commuting workshops from the law school’s Coalition Advocating Transportation Solutions, can help you access fresh air and views on the way to work.

If you ride to campus any day in September, you can log your miles and participate in the challenge. For inspiration, meet a few members of team Lewis & Clark: 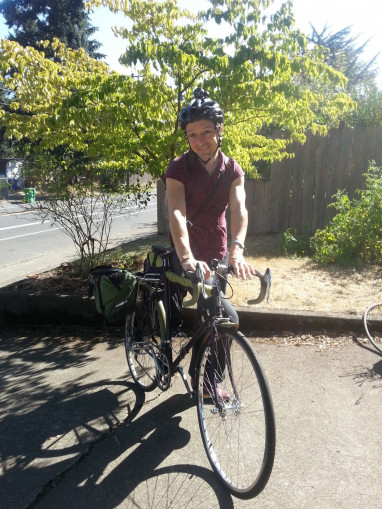 For the past five years, Miller has co-captained Lewis & Clark’s Bike Commute Challenge team. He organizes team-building events, including a free breakfast for bikers on the first and last days of the challenge, and a class covering common commuting routes and essential biking equipment.

His route to work frees him to enjoy, observe, and participate in the life of Portland’s neighborhoods.

“Rolling down the hill in the afternoon is a wonderful part of my day,” Miller said. “It contributes both to my mental health and exercise.”

Miller came to Portland from New York City, and travels everywhere by bike and transit. He’s biked to work since joining Lewis & Clark in 2007. He serves on the Transportation and Parking Advisory Committee, ensuring that the needs of the Graduate School are represented, but also advocating for transportation policies that better reflect the sustainability commitments in the College’s mission.

As coordinator of instructional technology and program assessment, Miller helps graduate faculty think through creative and inclusive strategies for teaching with technology. He also manages data processes to ensure quality student service, and analyzes student data that the Graduate School uses to guide the ongoing development and adaptation of its programs. 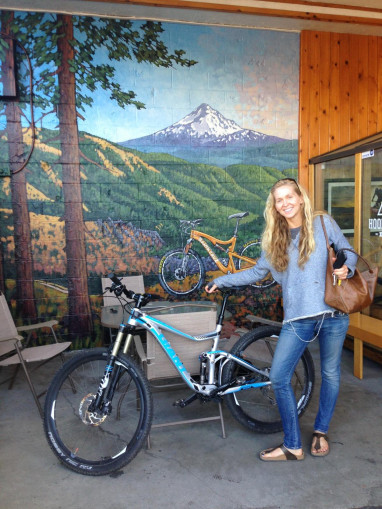 She leaves her car on campus on Tuesday nights, and it takes her about two hours to bike home in the evening. Sometimes, she loads her bike on the front of a Metro bus and rides from downtown.

“I get a whole additional boost of energy from riding,” Terjeson said. “It clears my brain and I have to say I love riding by all the traffic on the I-5 bridge.”

Terjeson admitted that the first time she tried the commute, she was so scared she asked her boyfriend to come get her if she needed help. “From then on it’s been pretty easy,” she said. “And I’m getting stronger.”

She hasn’t yet tried a winter ride, but says she’ll give it a shot this year (and be “thoughtful and careful about it”).

Terjeson raises money for the college and manages the direct mail and email solicitation program. “I have an awesome team and I love working at Lewis & Clark,” she said.

Her ride: A Surly road bike in her favorite color—baby blue. It’s fitted for panniers so she can carry clothes and change when she gets to work.  She also just bought a Giant Trance (see photo) for mountain biking—don’t be jealous. 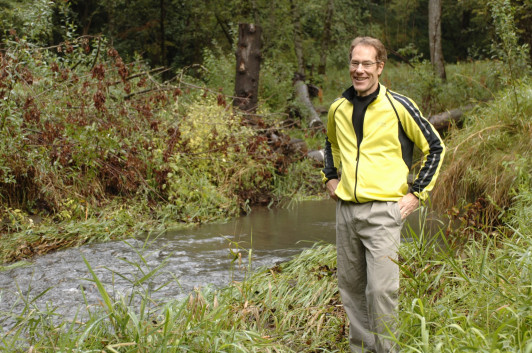 Daniel Rohlf, professor of law and of counsel at Earthrise Law Center

Since 1988, Rohlf has been riding to work almost every day. He chose a house close to campus for an easy three-mile commute, but often deviates to longer routes for a better workout.

“I love riding here because Portland takes cycling seriously as a form of urban transportation, and consequently has decent facilities and bike lanes,” he says.

Rohlf thrives on the hills in Southwest Portland. His favorite routes include some of the area’s steepest terrain—a trip up Council Crest or along Terwilliger Boulevard from downtown. While tackling Portland’s toughest routes, he still manages to have fun and encourage new riders.

“I like to ride to work because it gets me outside and I get to experience whatever weather is on tap that day,” he says. “Plus just being on a bike almost always puts me in a better mood. And I laugh at traffic jams.”

His ride: A 1999 Klein road bike when it’s sunny, and when it’s raining, a Cannondale cyclocross bike from his racing days. 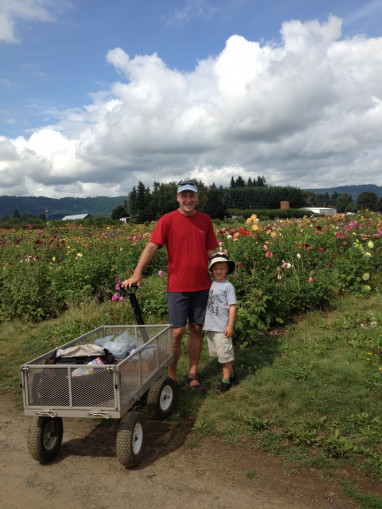 Peter Mortola and his son Riley with a completely different set of wheels at Sauvie Island collecting berries. “Riley and his brother Noah rode or walked to Lewis & Clark almost every day last year,” Mortola said.

Many would-be bike commuters in Portland are discouraged by the Sellwood bridge or the Riverview Cemetery hill on the way to Lewis & Clark. That hasn’t stopped Mortola. For 16 years, he’s been riding the four miles over the bridge, up the cemetery bike path, and into campus.

Mortola is co-director of the school psychology program, author of Windowframes: Learning the art of Gestalt play therapy the Oaklander way, and co-author of BAM!: Boys Advocacy and Mentoring: A leader’s guide to facilitating strengths-based groups for boys. His scholarship and practice focus on working with adults to help them better understand developmentally appropriate methods of teaching and counseling. Biking gives him a chance to let ideas germinate.

“The best ‘side effect’ of biking for me has been the clarity of thought I can get while on my bike,” he says. “Preparing for a class, meeting, whatever—that time on my bike gives me moments where the best ideas pop into my head while my feet are busy pushing the pedals.”

His Ride: Mortola replaced his mountain bike with a cyclocross bike sturdy enough to take fenders. For safety and maximum control while zooming down the cemetery, he added disc brakes.

Find your route to campus from any Portland neighborhood with Miller’s biking map, featuring shortcuts, elevation, and opportunities to hop on transit.

Stop by the snack bar on your way to campus at Gate 2!

Caleb Diehl ’16 contributed to this story.