As the rising sun peeks over the sun-baked hills of the Tiber River Valley outside Rome, four Lewis & Clark undergraduates wake and prepare for a hard day’s work.

Two millennia ago, Roman aristocrats escaped to this valley to unwind in their country villas. Here, they soaked in baths, gossiping about the emperor and reciting poetry as they nibbled on olives from the surrounding orchards and sipped wine poured by slaves.

This past summer, Gordon Kelly, associate pofessor with term in humanities, led a contingent of classics majors to excavate the ruins of one of these villas, thanks in large part to grants from the Lewis & Clark Collaborative Research Program (funded by the Mellon Foundation), Lewis & Clark’s Student Academic Affairs Board, and the Bryan Fund for Classics. Together, they dug deep into the lives of ancient Romans and gained firsthand experience in the excavation, interpretation, and preservation of their material culture.

The alarm rings early for 6 a.m. breakfast—a quick meal of Nutella spread on bread, fruit, and coffee. Kelly and his students trek from their lodgings at an agriturismo (a sort of rustic bed-and-breakfast) to the dig site, about a mile away. Wielding pickaxes and trowels, the Lewis & Clark students, one sophomore, two juniors, and one senior, have joined about 20 peers from colleges around the U.S. on what is officially called the Upper Sabina Tiberina Project, run by the Rutgers University Archaeological Field School.

By 7, the student crews are at work in the trenches of the ancient villa, designated by modern scholars as the Villa con Criptoportici, after the underground galleries discovered at the site. As they dig, they think about what discoveries the day might bring: a shard of pottery, an ornate mosaic, a bronze coin, a human skull, or, sometimes, just a mound of freshly turned soil. “Every day there’s an X factor,” Kelly says. “You never know what you’re going to get until you start digging.”

Growing up, Melanie Goske CAS ’16 dreamed of becoming an archaeologist, even though she admits she’s still never seen Raiders of the Lost Ark in its entirety. When Kelly told her about the summer research trip to Italy, she says, “It seemed like a dream come true.”

A California native who is active in the college’s Feminist Student Union, Goske never planned to major in classics. But a Latin class, taught by Kelly her first year, made her “fall in love” with ancient texts and convinced her to double major in classics and sociology/anthropology.

Goske quickly adjusted to the challenges of the Italy trip, from coping with bug bites to the physical demands of digging. “I’m not just reading texts on the ancient Romans,” she says. “I’m learning and seeing how they lived their lives.”

Gordon Kelly got hooked on history as a youngster paging through picture books about the ancient world. After a stint as a U.S. Navy officer, he returned to school to embark on a career in academia. He earned his PhD in classical studies from Bryn Mawr College —and even traveled to Greece to volunteer as an oarsman on a reconstruction of an ancient Athenian trireme warship. He has taught 10 years at Lewis & Clark and authored the book A History of Exile in the Roman Republic, published in 2007 by Cambridge University Press.

The Italy trip is also educational for Kelly, who has spent most of his career as a scholar digging through texts, not dirt. Two summers ago, a colleague from graduate school who now teaches at Rutgers enticed him to come work at the Villa con Criptoportici.

“As a historian, I am an end user of archaeological data,” Kelly says. “I wanted to get in on the other side.”

He enjoyed the dig so much he returned this past summer with students, soon-to-be graduates in the classics major recently established at Lewis & Clark. For students, the research trip was a unique, hands-on experience to complement their liberal arts education under the guidance of a well-respected professor as well as the team of archaeologists and other experts overseeing work at the site. For Kelly, the trip was a chance to recharge his batteries, enriching both his teaching and research: “I get to be a student again.” 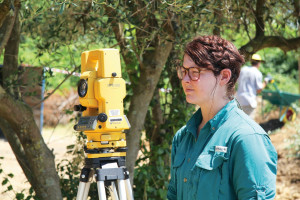 The Oklahoma native is interested in becoming an archaeologist/ osteologist, so she jumped at the chance to work side by side with archaeologists in the field. “I hoped to learn what it actually means to work on an archaeological site,” she says. And that she did.

Birdwell got the “incredible opportunity” to excavate a complete human male skeleton. Working closely with an evolutionary anthropologist on the project staff, she learned how to dig, clean, sort, and identify the bones, as well as how to reconstruct the fragmented parts.

“I had a bit of a crash course in anatomy,” she says, “and that day there’s an X factor,” Kelly says. “You never know what you’re … going to get until you start digging.”

Every day, the students are assigned a specific spot to excavate. The dig site is divided into a grid, with each square 2 x 2 meters; anything unearthed is detailed and documented. Each of the Lewis & Clark students also has a research specialty—human bones, mosaics, pottery, construction techniques, and so on.

The trench work is painstaking as well as physically demanding, and everyone takes rest breaks every couple of hours to nibble on bread and cheese. Staying hydrated is essential as the sun climbs, with temperatures reaching into the 90s. 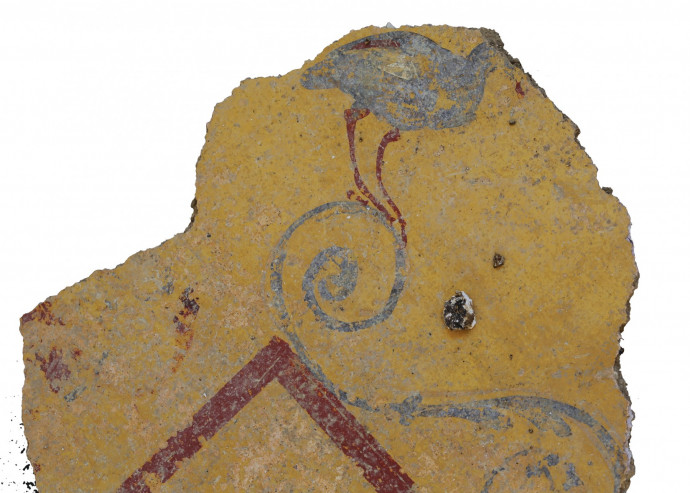 Fragment of decorated wall plaster unearthed at the site.

Local legend has it that the villa was once owned by the Roman poet Horace, though other villas in the region stake the same claim. Over time, the villa—actually a small compound of several buildings—evolved into more of a working farm, as evidenced by a bathhouse that was repurposed into a room for pressing olive oil. The site was occupied into late antiquity, when the villa collapsed.

Skeletons, possibly from the Middle Ages and some dating as late as the 1700s, have been uncovered during the digs, suggesting the area served as a burial ground for several centuries afterward. A number of theories seek to explain the presence of human remains, ranging from the idea that the area was in some way considered holy ground by locals in medieval times or, quite the opposite, that years later that it was a sort of dumping ground for those ineligible for church burials, such as criminals, suicides, and heretics. 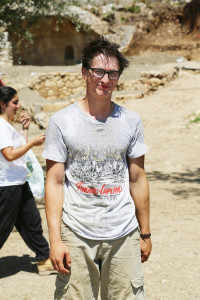 Pasco CAS ’15Ryan Pasco CAS ’15 has been studying Latin since middle school. The Massachusetts native knew he wanted to go the classics route at Lewis & Clark, where his passion for ancient texts has deepened and broadened to include ancient history.

When Kelly gave a presentation about the Italy trip during the Classics Department Colloquium on campus last year, Pasco was determined to go. It felt like destiny—he had once translated one of Horace’s odes in which the poet invites his patron to visit his rustic villa.

An avid practitioner of parkour (which involves negotiating urban obstacles on foot at great speed), Pasco needed to be fit to do some of the hardest labor on the site: digging through a subterranean passage.

“Before this trip, I had no experience with archaeology,” he says. “I’m glad I’ve gotten the chance to realize that so much of our knowledge of antiquity is based on archaeolo…gists doing difficult, methodical work.”

By 1:30, the sun’s rays become too intense to work outdoors. The students trudge to the agriturismo to eat, take a shower (typically cold), and relax. Some afternoons, Kelly leads mini seminars in Latin. After procuring a ball in the nearby village of Vacone, a few students string up a makeshift net in the courtyard for volleyball games. Others while away the hours playing cards or trivia games, or just enjoying quiet time. On weekends, the students are free to travel into Rome, a 40-mile train ride away, and other nearby spots for sightseeing.

Dinner is at 8, served by the agriturismo’s cordial owner, Ferminio. Sitting at long communal tables, the hungry students feast on platters of homemade pastas, followed by a meat course, and then fruit for dessert.

Afterward, everyone wanders back to their sleeping quarters, exhausted by the day’s work, yet excited by the what the next day might reveal hidden in the ground.

During their five weeks at the dig, the Lewis & Clark students made their share of noteworthy finds: the skeleton, the handle of an amphora used for storing wine or olive oil, an intact ceramic oil flask, and a rare piece of ancient glass, among other discoveries. 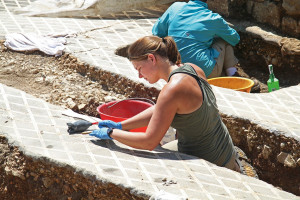 Karr CAS ’17Geneva Karr CAS ’17 traces her fascination with the ancient world to taking high school Latin. Getting to go on an archaeological dig “seemed unreal,” but the trip lived up to expectations for the California native, who competes on the Pioneer women’s swim team.

“The smallest finds can be extremely exhilarating,” she says, “especially after spending all day moving piles of dirt.”

Before going to Italy, Karr did extensive work on Roman mosaics, poring through books and photographs showing the elegant, exquisite artistry of ancient tile work.

“But even reading so much about Roman mosaics didn’t prepare me for actually seeing one,” she says. “Just being able to touch a skillfully crafted, beautiful mosaic that was created by someone 2,000 years ago was pretty mind boggling.”