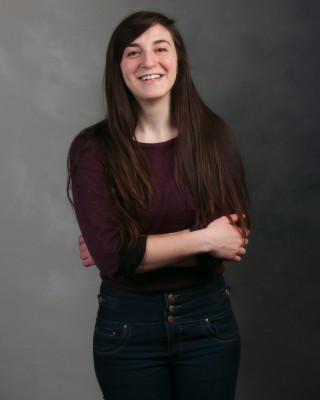 Erica Terpening-Romeo, a recent graduate of the class of 2014, is a distinguished scholar, a seasoned thespian, a skilled writer, and a successful entrepreneur.

She is also the recipient of two of Lewis & Clark’s highest annual honors: the Rena J. Ratte Award and the Senior Woman Recognition Award, given by the American Association of University Women. Never before has a graduating student received both of these prestigious awards.

Hailing from Boulder, Colorado, Terpening-Romeo spent much of her childhood at the city’s Colorado Shakespeare Festival. It was there that her academic prowess took root.

“I came across Isaac Asimov’s Guide to Shakespeare when I was 10 years old and spent that summer taking copious notes on each of its 37 plays, based on Asimov’s style of analysis,”Terpening-Romeo said. “When I look back now, I realize I was sort of playing at being a scholar.”

Terpening-Romeo’s theatre-filled upbringing led her to attend a performing arts high school in New York City, where she also worked as managing director of the off-Broadway Strain Theatre.

Since arriving at Lewis & Clark, the English major and Pamplin Fellow has parlayed her unique background into an array of on-campus activities. Beyond acting in a number of the college’s theatrical productions, Terpening-Romeo has worked as a writing center consultant and as a student writer for Lewis & Clark’s Chronicle magazine. She also has collaborated with Assistant Professor of English Jerry Harp to author a manuscript that addresses the performance history of Shakespeare’s Romeo and Juliet.

Terpening-Romeo has made a significant impact on the greater Portland theatre community. After winning a Drammy award in late 2012 for her direction of A Midsummer Night’s Dream at Post5 Theatre, she—along with Caitlin Fisher-Draeger BA ’12—established Anon It Moves. The experimental Shakespeare company opened its first season with an acclaimed interpretation of Henry V, adapted and directed by Terpening-Romeo.

Most recently, Terpening-Romeo became one of four program coordinators behind Portland’s Complete Works Project. The two-year endeavor, which began in April 2014, will result in production of Shakespeare’s 37 plays by nearly 20 of the city’s theatre companies. Over the summer, she played Hamlet in Anon It Moves’ contribution to the project.

In the future, Terpening-Romeo intends to study Renaissance literature at the doctoral level. Her eventual plan is to professionally teach and direct the works of Shakespeare.

“What makes Erica so remarkable is that she manages to do such stellar work for so many different people, in so many different contexts, and all simultaneously,” said Tuajuanda Jordan, who was dean of the College of Arts and Sciences during Terpening-Romeo’s tenure. “Erica has modeled the kind of serious inquiry and passion for course material that is possible only among a small portion of deeply invested scholars… scholars, not students.”

The Rena J. Ratte Award, established in 1970 to memorialize the esteemed professor whose name it bears, is presented to a graduating senior who has pursued and achieved the utmost in excellence while attending Lewis & Clark. The Senior Woman Recognition Award honors outstanding scholarship, character, personality, community contributions, and potential for future achievement.