Standing on a sidewalk in downtown Philadelphia, members of the League of Creative Interventionists closed their eyes for a short meditation. Time seemed suspended as they listened to the buzz of cars and the cadence of nearby conversations.

Opening their eyes, they playfully began their task: building a sidewalk “slow lane” to encourage passersby to proceed more leisurely.

“I deliberately had no plan, only three rolls of duct tape and some paper,” says Hunter Franks, participatory artist, league founder, and one of Good magazine’s top 100 global change makers for 2014. “We created a dance station, a hopscotch grid, vertical streamers, and signs encouraging people to linger and take a sunset photo.”

Backed by a $55,000 grant from the Knight Foundation, Franks was on a multicity tour to design projects promoting playful, spontaneous interactions. The ultimate goal was to break down barriers and strengthen communities. He began in Macon, Georgia, and after leaving Philadelphia, traveled to Akron, Ohio, and Detroit, Michigan.

“I work with local organizations, documenting our collaborative activities and assessing how small-scale temporary interventions can lessen feelings of isolation and create connections,” he says.

Franks founded the League of Creative Interventionists, a global network that uses creativity to build community, after successfully launching the Neighborhood Postcard Project, which he started on a smaller scale in his hometown of San Francisco. Armed with postcards reading “Greetings from the Tenderloin” (a district in downtown San Francisco that faces challenges of homelessness, crime, and poverty), Franks asked residents to share what they love about their neighborhood. He then mailed the postcards to random addresses in different parts of the city, hoping to change perceptions.

One proud woman wrote: “We are a small village of people who really care about each other. There’s more to the Tenderloin than drugs and dealers. Over 5,000 kids live here! Including my 4-month-old daughter.” 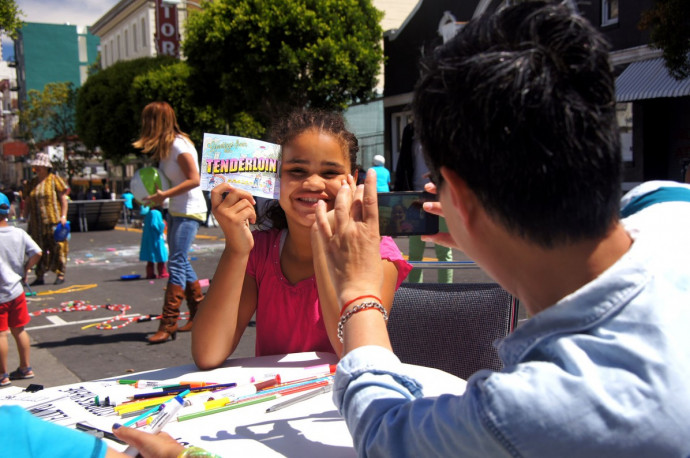 Franks began his journey as an art and communication major at Lewis & Clark. He managed the Platteau, the student-run art center, and was editor in chief of the Pioneer Log, the student newspaper. He says both positions taught him to delegate, manage time, and create partnerships.

Unable to immediately find work as a graphic designer after graduating, Franks worked as a bellman at a luxury hotel in downtown Portland. “I loved talking with people I didn’t know and learning about their lives,” he says. Buoyed by those interactions, he set out to walk from Los Angeles to New Mexico in 2011, talking to strangers along the way and blogging about his journey on social media sites. “That experience continues to fuel my desire to connect and engage with underrepresented people and places,” he says.

Franks has also served as community manager for the San Francisco Mayor’s Office of Civic Innovation and cofounded a movement to turn underutilized spaces into temporary cultural centers. Last year, students at Gunn High School in Palo Alto, California, invited him to deliver a TEDx Talk about how a simple postcard can build community.

Franks finds that traveling to new cities as a solo artist can be both daunting and exhilarating: “I believe there is great value in art that engages people and makes them think and act in new ways.”