Seeing History Through the Trees

Ron Towner spends much of his time inspecting tree trunks, but he is not an arborist, a logger, or a sawmill worker. He is a dendroarchaeologist—an expert in reading the concentric rings that record a tree’s annual growth.

Changes in yearly precipitation and temperatures cause variations in the width of each year’s tree ring, and these irregular spacings are consistent from tree to tree within a given region. These tree-ring consistencies—visible on core samples no bigger around than a pencil—allow researchers to track centuries of environmental changes and establish dates of archaeological sites. As an associate professor at the University of Arizona’s Laboratory of Tree-Ring Research, Towner has used tree-ring analysis to help date sites all over the American West.

Towner says his path from Lewis & Clark student to tree-ring expert has taken a “serendipitous”ˮroute, but the unifying thread has been a passion for history. He credits Stephen Dow Beckham, Pamplin Professor Emeritus of History, with inspiring his own love affair with the past. “Dr. Beckham’s enthusiasm in the classroom was contagious,” Towner recalls. “He loved a good discussion, and he challenged students to think and write clearly.”

After graduating in 1979, Towner worked as an archaeological excavator and became especially well versed in lithics, the identification and dating of stone tools such as projectile points, axes, and scrapers. (He is a skilled flint knapper who has been known to gift his friends with faux arrowheads chipped out of bottle glass.)

On earning his master’s degree in anthropology at Washington State University, he and his wife taught beekeeping with the Peace Corps in Tunisia, an assignment he affably concedes was mostly useful as a friendship mission. “The beekeeping apparatus didn’t work too well, but the Tunisians definitely got to know us,”ˮ he notes. The couple then moved to New Mexico, where Towner worked as an archaeological surveyor for the Navajo tribe.

By the time he moved to Tucson and the University of Arizona to pursue a PhD in anthropology, Towner still thought of himself as a lithics guy, but a chance field trip to the pueblitos of northwestern New Mexico set him on a new path. Long thought to have been built in the early 1700s by Pueblo Indians for defense against Spanish colonists, the pueblitos—dozens of small sandstone and wood structures built atop mesas—were ripe for a closer examination.

Matching more than a thousand core samples from the wood in the structures to existing regional tree-ring data, Towner concluded that the pueblitos were built much later, and by the Navajo (Diné) people, not the Pueblo. Defending the Dinétah: Pueblitos in the Ancestral Navajo Homeland, Towner’s 2003 book based on his dissertation, significantly changed scholars’ understanding of the region’s history. 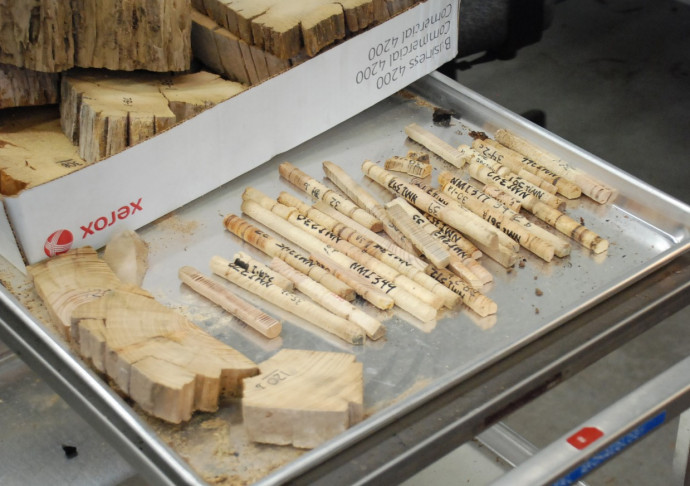 As of 2013, the university’s tree-ring laboratory is housed in an architecturally striking new building with ample room to store and study its collection of more than 2 million tree-ring specimens. Towner was recently named the Agnese and Emil Haury Endowed Chair in Archaeological Dendrochronology.

In addition to classroom teaching, Towner regularly conducts field schools at archaeological sites throughout the West (to learn more, email rtowner@ltrr.arizona.edu). He is also one of a dozen contributing experts for Time Team America, an Oregon Public Broadcasting TV series that airs nationally.

Reflecting on his time at Lewis & Clark, Towner says he’s most grateful for its emphasis on communication. “Lewis & Clark taught me how to construct an argument and how to get my points across to all sorts of audiences,” he says. “These skills have really helped me bring history alive for others.”