Getting to the Heart of Nutrition

Mollie Dickson remembers relaxing at the kitchen table in her childhood home, talking with her father as he cooked tasty and nutritious meals for their family.

On weekdays, he sent Dickson and her sister off to school with colorful gourmet sandwiches: thick slices of multigrain bread filled with fresh peppers, crisp cucumbers, leafy greens, and creamy goat cheese. His creations were almost unrecognizable to classmates accustomed to bland white foods and sugary desserts.

“The kitchen was the heart of our home, the place where I felt most comfortable,” says Dickson. “My parents bought me a beautiful desk for my bedroom, but I always ended up studying at the kitchen table.”

With a nod to her father—and building on her affiliation with the Center for Developmental Health at Oregon Health & Science University (OHSU)— Dickson launched The Heart’s Kitchen in 2012 with her business partner, Jennifer Bryman. The company is composed of a nationally recognized team of culinary professionals, educators, and dieticians.

One satisfied client is Real Life Food and Fitness in New York. For this startup, The Heart’s Kitchen developed more than 30 recipes for 500-calorie meals that could be prepared fresh locally and packaged for at-home reheating. Client demographics, taste preferences, dietary needs (including vegetarian and gluten-free), nutrition, cost, and the quality of ingredients all factored into the process.

“The team at The Heart’s Kitchen helped us turn our business concept into a reality… . We needed a partner who shared our philosophy,” says company owner Amy Skalny. 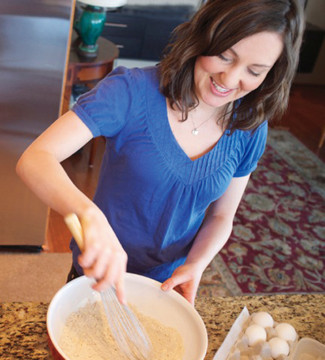 Each team member brings a set of unique skills to the table. Dickson’s strengths lie in nutrition science and health writing, education consulting, and curriculum development. “I love transforming complex scientific research into words that engage and inspire,” she says. “I want people to cook and eat as if their lives depended on it—while enjoying the culinary experience.”

With that goal in mind, Dickson regularly freshens content and blogs for The Heart’s Kitchen website. This fall, she’s partnering with OHSU on a large project in Astoria. She’ll create and teach a 12-week course to educate 100 pregnant women about nutrition, healthy food choices, and hands-on cooking.

“The food we eat is critically important in utero up to two years. Its impact lessens during childhood and adulthood then peaks again with the elderly. Informed nutrition is also critical for cancer patients and their caregivers,” says Dickson, who has two family members battling the disease.

She began her career as a teacher at Sherwood Middle School in Oregon, following her mother into the field of public education after earning a master’s in teaching from Lewis & Clark’s Graduate School of Education and Counseling. As a student teacher, she enjoyed blogging about her experiences in the classroom. Later, she encouraged her students to pursue a daily writing practice of their own.

A lifelong foodie with a passion for health and nutrition, Dickson moved on to work as an education specialist at OHSU before starting her own company. During that year, she met her business partner at a seminar, and within six months, The Heart’s Kitchen was up and running.

“We’re mission driven,” she says. “We’ve found success by listening and adapting to the marketplace and being willing to try new things.”