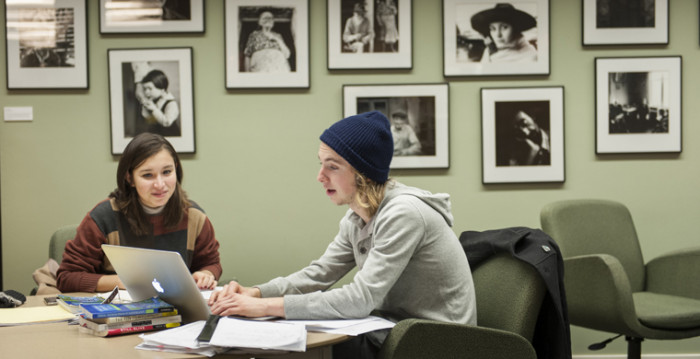 Writer Adair Law arrived at Watzek Library this summer seeking an illustration to accompany her story for the U.S. District Court Historical Society on Army captain and clerk Joseph Alton Sladen. After working with assistant archivist Zach Selley, Law was shown a 1879 sketch from a collection of illustrations by Charles Erskine Scott Wood.

As one of the librarians who curate Watzek’s special collections and archives, Selley is well equipped to answer research questions like Law’s. On other days, more obscure queries come from Lewis & Clark students: What was the name of Lewis and Clark’s dog? Does the engraving on the side of Evans Music Center spell out a song?

Selley can point both seasoned writers and Lewis & Clark first-years to the countless historical photographs, journals, and illustrations in Watzek’s special collections and archives. Most of these materials are accessible in print and online. We asked him to dig into some of the library’s most remarkable resources.

The oldest book in the library

Watzek recently acquired an illuminated 15th-century book of hours. Written in Latin and French, the text describes the lives of a number of Christian saints and includes full-color illustrations. Though most of Watzek’s special collections date to the 18th and 19th centuries, the library owns a handful of 15th- and 16th-century texts.

Watzek librarians have digitized every issue of college’s student-run newspaper, The Pioneer Log, and the Voyageur yearbook. Researchers who arrive with a phrase or a name can find the stories of students from any class year since 1947.

Watzek’s collection of writings on gender issues dates from the 1800s to the present. It consists in large part of the works of Jean Ward, a Lewis & Clark communications professor for more than 40 years and the founder of the Gender Studies Symposium.

Encompassing the entire life’s work of Oregon Poet Laureate, peace activist, and Lewis & Clark professor William Stafford, the archives hold 30,000 pages of poems, letters, and daily writings. Watzek also preserves lesser-known products of Stafford’s creativity, including his speeches, prose, and some 22,000 negatives from his work as a photographer.

Watzek has replicated the entire library of natural science texts and literature that Meriwether Lewis and William Clark hauled with them across the continent.