Tim Swinehart M.A.T. ’05 sits at the front of his international baccalaureate social studies class, a guitar across his knee. A few students take their phones out to record his rendition of John Prine’s “Paradise.” In the song, a father explains to his child how the old mining town of Paradise, KY, no longer exists after “Mr. Peabody’s coal train has hauled it away.” More than just a favorite of Swinehart’s, it directly connects with the work he’s been doing for the past decade in his social studies curriculum: helping his students explore the cause and effect relationship between the environment, the global economy, and people.

“The topic of global climate change is typically reserved for science classes,” he says. “When I started teaching, the district’s adopted social studies curriculum had about three paragraphs on climate change.” Believing that wasn’t enough, Swinehart connected with with his teaching mentor and friend Bill Bigelow to start a monthly Earth in Crisis curriculum group. (Swinehart and Bigelow are now both adjunct instructors at Lewis & Clark.)

“We took turns pulling together materials and building lessons,” he says. Each month, the teachers would reconvene, refine their lessons, and bring new ideas. The collaborative model led to new curricula the teachers could use, and also planted the seeds for the recently released A People’s Curriculum for the Earth: Teaching Climate Change and the Environmental Crisis (2014, Rethinking Schools Publications), a book co-edited by Bigelow and Swinehart. 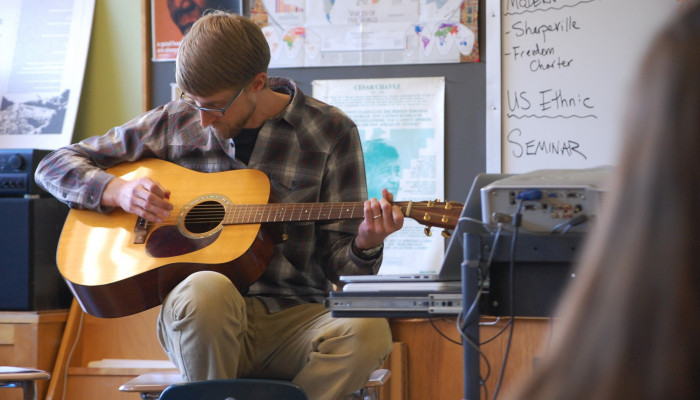 In the book’s introduction, Swinehart and Bigelow cite one of the great dichotomies of climate change: how those around the world who tend to be “least” responsible for causing climate change often experience the most intense effects of it. While the examples are many—from indigenous cultures that lose their lands to mining, to African communities dealing with desertification, to poor Americans who reside in what’s known as the Gulf Region’s “cancer alley”—their stories are easily overlooked. Spotlighting this dichotomy is one of the ways Swinehart’s work in and out of the classroom is a plea for greater social justice, a concern that came to life at Lewis & Clark and has continued to interest him since.

“Everyone is affected by the environmental crisis,” he points out. “But we are affected unequally based on race, class, and location.” The economic system that puts profits ahead of people creates social inequality while degrading the environment. “We’re being asked to ignore the fact that we’re trashing people and the planet in order to keep growing the global economy,” he says.

He wants his students—from those at Lincoln High, to the masters students he teaches at Lewis & Clark as an adjunct professor—to explore realities and, ideally, solutions collectively.

“There are no individual solutions to the climate crisis,” Swinehart says. “When you’re honest with students about the problems, and you give them the charge to solve things together—while not telling them exactly how to solve them—some of them will inevitably stand up and say, ‘Hey, what if we change the rules?’”

Swinehart wants every lesson to inspire tough questions, and ultimately to push students to consider how to create a more just world.

“From a teaching standpoint, I always ask, is this good curriculum?” he says. Where the book is concerned, Swinehart says the curriculum encourages students to go beyond asking questions about the way the world is, “and gets them to consider how the world can become more just.”

To inspire such levels of engagement, Swinehart turned to role-playing, a learning style he first experienced during his year of student teaching at Lewis & Clark.

“I worked with two wonderful mentors and saw this type of teaching in practice,” he says. “I witnessed students come to life, and experienced deep, in-class discussions centered around fairness and justice. Ten years later I’m still trying to emulate some of these processes in my classroom.”

In one example activity, Swinehart’s students receive short biographies, each telling the story of someone involved in or affected by fossil fuel production—from CEOs of power companies to local fisherman. Students break into groups and are presented with a scenario or challenge. They work from their adopted personas, working through concerns and toward solutions.

“These activities create bigger connections and inspire engagement in new ways,” Swinehart says. Embodying their roles, students connect with others in the room, and delve deeper into the greater web of human and ecological connectedness.

“For instance,” Swinehart continues, “they see how the mining, transport and burning of coal leads to pollution settling into lakes and rivers, thereby contaminating fish, disrupting the ecosystem and food chain, and causing human disease and illness. When we debrief this, students speak up about the people. These are the connections that draw them in and open their hearts to the matter.”

It’s true that these issues and harsh realities can come with various levels of gloom. As a father of two young girls, Swinehart’s tone stays pragmatic and positive.

“We’re surrounded by the myth of the individual in our society,” he says. “In truth, there are very few things any of us do exclusively on our own. This moment is a huge opportunity for all of us. Our best solutions to the climate crisis can solve many of the social inequalities that have resulted from the last 200 years of imbalance. We can absolutely create a more just, more livable future, and I believe it’s our responsibility to do so—for our children and for ourselves.”