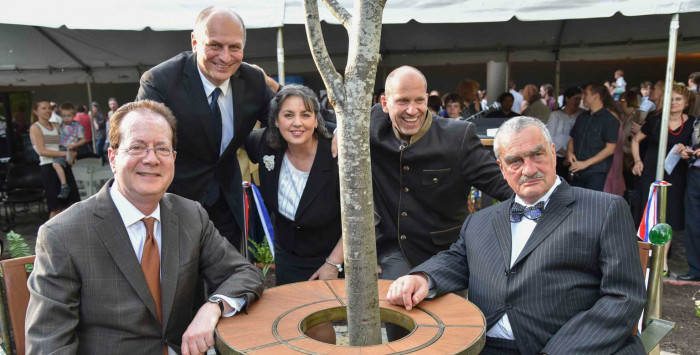 On May 9 more than 200 guests, including international dignitaries and residents from the Czech community in Portland, gathered outside Fir Acres Theatre to dedicate Lewis & Clark’s newest addition to the campus grounds: Václav Havel’s Place, a permanent installation in honor of the late Czech artist, playwright, and dissident-turned-president.

The intimate space is part of a worldwide project to create a network of public spaces where people can hold frank exchanges of important ideas, an expression of Havel’s belief in the power of mutual dialogue.

Professor of Theatre and Department Chair Štĕpán Šimek, an authorized translator of Havel’s body of work, was the key to Lewis & Clark securing the installation and organizing a successful event.

The program featured reflections on Havel’s life, performances of excerpts of his plays, and a panel discussion on the significance of his contributions to Western democracy and human rights.

Lewis & Clark joins Georgetown University as the only other location in the United States with a Havel’s Place installation. The memorial at Lewis & Clark was donated by the Embassy of the Czech Republic.

Lewis & Clark is a premier destination for those who embrace the international dimensions of learning. Our curriculum is global in scope, and extends beyond the classroom: Since our overseas study program began in 1962, students have participated in more than 800 programs in 68 countries on six continents.

We also attract students from all over the world. Most of our students come from more than 500 miles away, with about nine percent coming from another nation. In recent years, students have represented more than 75 countries on campus.