The graduate school and the undergraduate college join forces to create a pathway for underrepresented students to become K-12 science and math teachers.

“Science explains what’s around me, but the answers aren’t complete,” says senior chemistry major Hibaq Adan, her dark eyes shining in a face framed by a black hijab. “It excites me that there’s always something new, and there are always questions that need answers.” 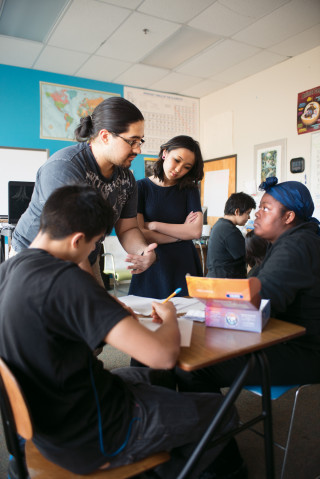 Adan, a Somali American who wears the traditional headscarf of her Muslim faith, as well as a number of other students at Lewis & Clark, are showing newfound interest in the traditionally male-dominated science, technology, engineering, and math (STEM) fields. It’s thanks, in part, to Community Engagement and Leadership in Science (CELS), a unique program designed to interest underrepresented students—including African Americans, Latinos/as, and Native Americans—in teaching STEM subjects.

CELS is a collaborative effort between Lewis & Clark’s College of Arts and Sciences and the Graduate School of Education and Counseling to encourage students from diverse backgrounds to pursue careers in K-12 math and science education. Funded by a four-year, $1 million grant from the Howard Hughes Medical Institute (HHMI), CELS pairs undergraduate mentors with high school students to explore real-world science—and, ultimately, possible teaching careers.

A Need for Role Models

STEM teachers, researchers, and other professionals often do not reflect the increasing diversity of the American population. According to the National Science Foundation, white men constitute more than half of the high-paying science and engineering workforce. While the number of underrepresented minorities getting science and engineering bachelor’s and master’s degrees has risen since 1993, their share of doctorates in these fields has flatlined at about 7 percent for the past 10 years. Over the past 20 years, the number of women in the academic doctoral workforce has increased considerably, but growth by underrepresented minorities remains slow.

Having an African American woman teaching calculus really stood out for me. It made me want to work harder and prove myself to her.Hibaq Adan CAS ’15

Liza Finkel, the HHMI grant faculty fellow and an associate professor of teacher education in the Graduate School of Education and Counseling, believes part of the problem is too few minority teachers. “We don’t have enough students or teachers from underrepresented minority groups teaching math and science,” she says.

That was true for Adan. While she’s always been attracted to science, all of her middle school and high school math and science teachers were Caucasian males. It wasn’t until she met Naiomi Cameron, associate professor of mathematics at Lewis & Clark, that she found a role model who looked like her. For Adan, the experience was transformative.

“Having an African American woman teaching calculus really stood out for me,” says Adan. “It made me want to work harder and prove myself to her.”

Se-ah-dom Edmo, CELS outreach coordinator, says when scientists, engineers, mathematicians, and math and science teachers don’t look like underrepresented students, it makes it difficult for many students to see themselves in these fields. “Most underrepresented students’ idea of scientists and mathematicians is the white male in the lab coat,” she says. “To them, careers in math and science seem unattainable.”

In an effort to reverse this trend, the CELS program offers both an academic year program and summer internships. “During the academic year, we work with five high schools running after-school programs for students who are not well served by the current system,” explains Finkel. “We encourage students from underrepresented groups, who are led by Lewis & Clark undergraduates, to do inquiry-based research projects. The projects use math and science as ways to understand community problems or issues that the high school students have identified with the help of their Lewis & Clark team.”

This year, 20 Lewis & Clark undergraduates, mostly math and science majors, have formed five teams consisting of a “community educator leader” and three or more “community educators.” To prepare the Lewis & Clark students to successfully mentor their high school teams, staff and faculty from the Graduate School of Education and Counseling offer monthly professional development workshops. Topics include getting to know students; lesson planning; helping students identify areas of interest; designing and carrying out an inquiry-based project; and data collection, analysis, and presentation.

In today’s world, professionals in STEM fields often work across disciplines to solve problems and advance knowledge. It’s a trend that is certain to continue and intensify. As part of the Howard Hughes grant, Lewis & Clark is responding to this reality by making curriculum changes to introductory math and science courses in the College of Arts and Sciences. The goal is to make these courses more interesting, more relevant, and more accessible to students.

“Our interdisciplinary curriculum is meant to take introductory math and science classes and emphasize the connections between them,” says Liz Stanhope, associate professor of mathematics. “The Howard Hughes grant funds time for faculty to get together and find connections between classes they’re teaching and develop new hybrid curricula.”

For example, Lewis & Clark faculty have created a new hybrid course that combines math and biology into a single class that equips students with quantitative skills for the life sciences. “This course enables us to use math techniques to model biological phenomena, like population or paramecium growth, that we measure in the lab,” she says. Other interdisciplinary classes include a chemistry–environmental science course.

These new hybrids break down barriers between areas of math and science and empower students to look more holistically at problems. “Research-level scientists use interdisciplinary approaches all the time,” says Stanhope. “Our goal is to help students understand math and science, get excited, and stick with these subjects.”

“We chose schools that are quite different,” says CELS Program Coordinator Megan Taliaferro. “Two are public high schools. One is a public magnet school. Another is an alternative school that supports students not traditionally successful in school. And one is a private Catholic school. All have big populations of underrepresented students.”

At De La Salle, for instance, only 17 percent of the student population is Caucasian. The school’s biology and environmental science teacher, Mike Napoli, works as a CELS mentor coordinator and offers a summer teaching workshop for Lewis & Clark undergraduate mentors. “Minority students at De La Salle don’t naturally gravitate toward STEM fields,” he says. “Throughout their educational career, STEM hasn’t been a viable option.”

CELS is changing that one student at a time. Napoli says, “STEM, especially technology, is in our students’ faces constantly. They want to get involved, but they need an opportunity. CELS is filling that void for students of color.”﻿

Guided by Lewis & Clark undergrads, high school student researchers come up with their own ideas to explore. For instance, at Beaverton Health and Science School, they’re studying why students skip lunch. At Clackamas, they’re looking at how class size impacts memory, concentration, and following directions. At De La Salle, students are interested in whether pedestrian racial ethnicity influences whether drivers stop at crosswalks. At Rosemary Anderson, students are exploring if classical music could be a stress-relieving alternative to smoking. The students at Cleveland High School are checking out the nutritional value of donated food. 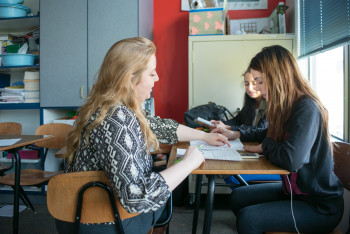 Napoli says this kind of real-world lab experience is transformative for underrepresented high school students. “Having experience in an actual lab with an internship really sets our students up to become interested in STEM.”

He says several De La Salle students who have participated in CELS summer internships are currently studying engineering. Lewis & Clark sophomore Edwin Shahravan, who identifies as Persian/Russian, got involved in CELS as a junior in high school and spent two summers working in a lab at Lewis & Clark. Today, he’s studying biochemistry and molecular biology and is in his first semester as a CELS mentor. “My CELS experience expanded and cemented my knowledge in science,” he says. “It also taught me organization, leadership, and the skills needed to be successful in science.”

When asked why she’s participating in the CELS program, Skinner says, “Back home in Issaquah, Washington, I work with little kids at a daycare center and, in the summer, at a French immersion camp. This program seems like a great way to give back.” High school student Horst appears a little baffled about what to do. “This is the one,” Skinner tells him gently, handing him a pipette. “That’s right, you’ve got this, Michael.”

The young student beams at Skinner as the study subject successfully fills the glass tube with saliva.

Study participants then head to a private room where they work for five minutes on mathematical calculations (the stressor). Then they give another saliva sample before resting for 15 minutes, listening to either classical music or white noise (the control). A final saliva sample is taken, and the subject is rewarded with a slice of pepperoni pizza.

Hayley Abourezk-Pinkstone a sophomore majoring in mathematics and economics who is in her second year with CELS, leads the Rosemary Anderson team. She got involved because she wanted to do something meaningful. She says CELS has more than met her expectations. “Having students open up and connect has been great,” she says. “I’ve improved my leadership skills, my ability to organize events, and connect with all sorts of people.”

Katie Kowal, a sophomore majoring in physics and political science, says CELS has given her insight into her own learning process. “As I struggle to convey concepts to students, it’s changed my perspective on my own learning. It’s also made me more passionate about my studies.”

“I can show kids, especially Mexican Americans, that they can go to college. They don’t have to just work at McDonald’s. They can be a scientist, a mathe- matician, an engineer. I tell them not to give up, don’t settle. You have all these doors open, don’t let them close on you.Henry Lemus CAS ’15

Henry Lemus, a senior majoring in biology, says CELS hasn’t changed his desire to pursue nursing, but it’s made him feel he’s making a difference. “I can show kids, especially Mexican Americans, that they can go to college,” he says. “They don’t have to just work at McDonald’s. They can be a scientist, a mathematician, an engineer. I tell them not to give up, don’t settle. You have all these doors open, don’t let them close on you.”

Adan graduates in May with a degree in chemistry. Her CELS experience is nearly over, but the program has changed the trajectory of her life. She’s been accepted into the M.A.T. program at Lewis & Clark’s Graduate School of Education and Counseling.

She dreams of teaching science to minority students, especially new immigrants from Somalia. “They’re so lost and there’s no one to help them,” she says softly. “I never thought about being a teacher until I was part of CELS. Now I know it’s the path I was meant to be on.”

Award-winning writer Bobbie Hasselbring is a regular contributor to the Chronicle and editor of www.realfoodtraveler.com