Part of Ralf Saborrosch’s job with Lewis & Clark’s yearlong Munich program is helping students secure internships and work during their time in Germany. Over the course of his many years as resident director, Saborrosch, a native of Germany, had noticed American and German students alike expressing apprehension about choosing which career opportunities to pursue.

To tackle their questions and concerns, Saborrosch brought together a group of students from both countries, including returning Lewis & Clark senior Devon Streich (’16), to create a unique event.

This past June, those students put on the first Alternative Career Night, aimed at helping fellow students navigate the often-daunting path of choosing a suitable career. Organizers expected turnout for the Thursday event at the University of Munich to be moderate—college students in Germany, much like those in the United States, enjoy spending their free time outside of the lecture hall. The event’s success, however, went above and beyond expectations.

The theme struck a chord with the student body. The night’s slogan, “Do what you want and not what the market expects from you,” drew the interest of more than a thousand students who registered for the event on Facebook. 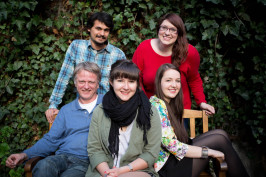 With the 750-seat auditorium filled, eager students listened to speakers such as Germany’s most well-known career consultant, the “Crazy Ice Cream Maker,” the former vice president of Germany’s Technical University, and a Zen master. The event also caught the attention of German media, which reported it on television and in the newspaper.

After the formal presentation, students mingled with the guest speakers and continued the conversation about how choosing a career that you love does not have to mean sacrificing traditional measures of success.

Speaking about the experience, Saborrosch said, “Working on our Alternative Career Night was an incredibly intense experience and showed me once more how amazing young people can be when they follow their passion.”

Lewis & Clark has long made it its mission to develop its students as global citizens. Each year, more than 300 undergraduate students participate in Lewis & Clark’s Overseas and Off-Campus Programs.

The yearlong Munich program was established by Lewis & Clark in 1972 and is open to students from Lewis & Clark and other Northwest institutions. Events like Alternative Career Night exemplify the impact that Lewis & Clark’s students make when abroad, as well as the benefits they experience as a result of overseas study.