Clutching his camera, Bob Fitch stood over the open casket of Martin Luther King Jr. on April 9, 1968. Before him, he saw the famous Reverend Doctor, civil rights leader, and martyr. He also saw a brother, a mentor, and a friend. He thought of the time he’d spent with King and others in the civil rights movement, photographing the height of the voting-rights struggle in the Deep South. And before he raised his camera to capture an image of King’s corpse, he paused. 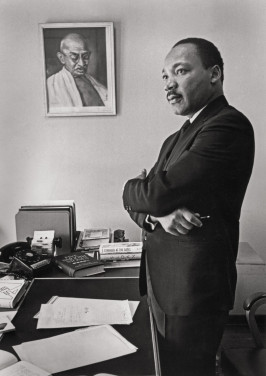 Martin Luther King Jr. in his SCLC office. On the wall is a portrait of Mahatma Gandhi, whose practice and teaching of nonviolent direct action inspired King's work. King asked Bob Fitch to photograph him here for the jacket of his then-forthcoming (and last) book, Where Do We Go From Here? published in 1967. This image is also the basis for the Martin Luther King Jr. Memorial in Washington, D.C., unveiled in 2011. Atlanta, Georgia, 1966.“It was a tough decision to take that photo,” he says. “It felt like blasphemy to put a camera in his face. But then I thought, ‘The world needs to see this horrible truth.’” Bringing the camera to his eye, Fitch made an indelible picture: King is at peace, yet a dark-skinned hand hovers above his head, its veins distended. The meaning of the picture is not so much in King’s dead body, but in that hand. The horrible truth is clenched forever in that fist.

Asked recently about the photo he took at Martin Luther King Jr.’s viewing nearly 50 years ago, Fitch chokes with emotion. “When I look at this picture today,” he says slowly, “I feel a throbbing in my chest and shoulders because I knew him personally. He recognized me as a colleague, as a younger brother. It’s as though my brother were murdered.

“Our country has a terrible history of slaying its workers for peace and justice— its teachers, preachers, union leaders, strikers. It’s a reminder that the whole struggle for nonviolence and justice is still very much with us today—both the struggle and the oppression.”

Bob Fitch’s photographs, recently archived and exhibited by the Stanford University Libraries, document many of America’s greatest 20th-century human rights campaigns. The powerful Martin Luther King monument on the National Mall is based on Fitch’s portrait of King, arms folded with a portrait of Gandhi behind him. Another Fitch portrait—of Mexican American and farmworker rights leader César Chávez—was adapted (and politically sanitized, says Fitch) by the U.S. Postal Service for a commemorative stamp issued in 2003. 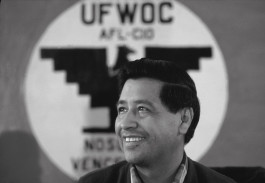 César Chávez. Delano, California, 1969As a psychology major at Lewis & Clark, Fitch saw none of this coming. Like many college students, he experimented with different personas: aesthete, academic, construction worker (during summer jobs), and beatnik. Having grown up in Berkeley, California, he found Lewis & Clark in the late 1950s “very Anglo.” 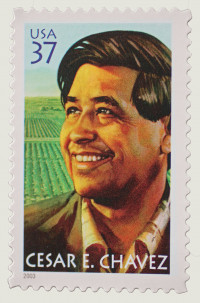 “I spent a lot of time across the river at Reed,” he says. The difference? “If you brought Pete Seeger to Lewis & Clark, you might get 20 people. At Reed, he would draw 200.”

Yet at Lewis & Clark, Fitch was shaped by the work of humanist psychologist Carl Rogers, encountered in a class taught by Professor Norman Hickman. In an era when most college psych departments taught behavioral psychology, Lewis & Clark’s faculty—including Hickman and Volney Faw—was oriented toward counseling.

Fitch says Carl Rogers’ nondirective person-centered approach to therapy taught him to “listen, reflect, and empathize— to really listen. I learned how to engage people who hated me, and it saved my life in the field.”

He recalls a gun-toting sheriff in the South who “threatened to put a bullet in my head.” A terrified Fitch, recalling Rogers, reflected back to the sheriff: “You hate my guts and want to see me dead.”

“You bet your ass I do,” the sheriff replied. But after an hour of such listening, reflection, and empathy, he let Finch go. “I talked him down from his rage, and he released me,” Fitch says.

After Lewis & Clark, he followed three generations of Fitch preachers into the “family business,” enrolling at the Pacific School of Religion—where his father, a well-known Christian ethicist, was dean. But in an era when a historic generation gap was opening, the younger Fitch’s career path was about to diverge dramatically. 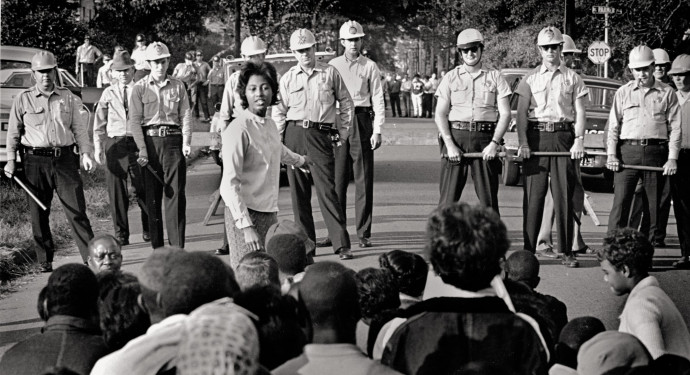 An internship at Glide Memorial United Methodist Church—an inner-city street ministry in San Francisco’s Tenderloin area —provided opportunity for action and change. (In the 1960s, Glide famously ministered to the city’s gangs, homeless, gays, lesbians, and hippies.) In a 2009 interview conducted by Leslie Kelen, director of the Utah Center for Documentary Expression and Art, Fitch remembers a key turning point at Glide:

[Glide] was publishing books on inner-city action issues, and they asked me to do some photography for them. That’s where things really started for me in photography. I had no formal training, so I began ferociously and vigorously consuming books about photographers —Cartier-Bresson and Dorothea Lange being visual mentors. I took every free course I could. I talked to every professional photographer I could, and I was surprised. I did well. I had a pretty good eye. 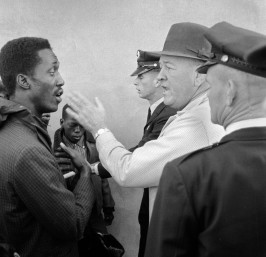 Sheriff Bill Lee (right) slaps Tom Gilmore as Gilmore leads a march to integrate schools. Following this incident, local minister and civil rights leader William McKinley Branch and SCLC staff member James Orange courageously suggested that Gilmore should seek the office himself. Following an initial 1966 defeat (due to voter irregularities), Gilmore was elected in 1970 and served as sheriff of Greene County until 1983. Eutaw, Alabama, 1965.Graduating from Pacific in spring 1965, Fitch wrote to an acquaintance at the Southern Christian Leadership Conference (SCLC), Martin Luther King’s organization, offering to take photos for them. A few weeks later, he was on his way to Atlanta, where, he says, he was informed by SCLC field organizer Hosea Williams, “‘We can’t send black photographers into the field. They’d get the crap beat out of ’em, or get killed.’ Pointing his finger at me, he declared, ‘We’re gonna send your little white ass into the field. And we want you to be a wire service, and every week, if possible, we want you to send out photos and stories.’”

Because he was fresh from seminary, Fitch was given the nickname “Preacher” among SCLC staff. Martin Luther King Jr., with whom he began traveling, was referred to as “Doc.” For the next year and a half, Fitch followed the action across the South, mailing batches of SCLC photos to major African-American newspapers and magazines, helping to keep the voting rights campaign alive in the minds of black supporters across the country.”

Three weeks after being invited by Coretta Scott King to photograph King’s funeral, Fitch was back in California, attending an interracial workshop on nonviolence in the Santa Cruz Mountains. One evening, ideological conflict wracked the workshop, nearly erupting into violence—and providing another turning point for Fitch.

I left the tense conference room, and went outside into the surrounding forest, found comfortable seating on a log, and started to breathe the soothing and fresh crisp ocean air. Suddenly, standing in front of me, was Dr. King! Doc was as real as the office desk where I now work. His full body was there. Using his familiar deep baritone, vowel-elongating, preacher voice, he spoke to me, com- manding: ‘Bob! Continue the work!’

I still don’t understand the phenomenon of his appearance. I don’t believe in ghosts or apparitions. My best guess is that what I experienced was my own psyche delivering a valuable revelation inspired by King. It was important! 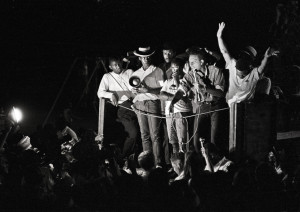 Stokely Carmichael makes the first public use of the “Black Power!” slogan from the back of a flatbed truck. Greenwood, Mississippi, June 16, 1966.The next day, reflecting on King’s revelation, Fitch made a list of nonviolent peace and justice leaders who were threatened with harm, prison, even death. He sketched out a plan, stuffed his Volkswagen Bug with cameras and supplies, and headed for Delano, California, where he joined César Chávez and the United Farm Workers organizing drive.

In the years that followed, sometimes intermittently between salaried jobs, Fitch documented numerous peace and social justice activities, including Dorothy Day and the Catholic Worker “houses of hospitality”; the first congressional campaign of California Congressman Ron Dellums; the war resistance activities of Fathers Dan and Phil Berrigan; and the draft resistance work of David Harris and Joan Baez. An accomplished folk musician, Fitch also connected with Pete Seeger aboard the iconic sailboat Clearwater, which Seeger used to raise awareness of pollution in the Hudson River.

Bob Fitch’s images provide a unique window into these and other movements for civil rights, union rights, and peace.

“Photojournalism seduced me,” Fitch writes on his website. “It is a compelling combination of visual aesthetics, potent communication, and storytelling. In order to tell the story effectively, one has to be there—close! It was my way to support the organizing for social justice that was transforming history, our lives and future.”

Jeffrey Lott is a freelance writer and social activist based in Delaware.

In honor of his significant achievements in photojournalism, Lewis & Clark’s Board of Alumni has selected Bob Fitch as this year’s Distinguished Alumnus. Fitch will receive his award at the Alumni Honors Banquet on February 19.

To order an exhibition catalog of Fitch’s iconic photography, contact Stanford Libraries at 650-725-1020.