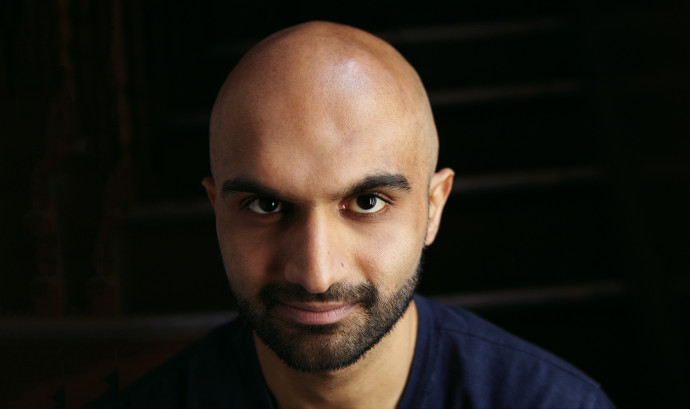 In the spring of 2002, Štepán Šimek was worried. It was the professor of theatre’s first year at Lewis & Clark, and he was about to direct his first main stage production at the college: Tony Kushner’s sprawling, two-part play Angels in America.

“The play may be one of, if not the best American plays of the last 50 years,” Šimek recalls. “Roy Cohn [a fictionalized version of the anticommunist crusader] is perhaps the greatest villain of the American stage. He’s an outsize personality, strong, devilishly clever, unbelievably good with language, extremely funny, explosive, powerful, manipulative, ever-present, undefeatable. I knew that without a strong Roy Cohn, the production was going to be a disaster. I was quite nervous.”

Šimek found his villain in Usman Ally BA ’04, then a 6-foot-3-inch second-year student with a growing devotion to the stage. “Usman showed up for audition, and here was this 19-year-old Pakistani guy, and he just nailed it from the very first moment,” says Šimek.

It was an exciting moment for Ally as well: “Playing such a misunderstood, seemingly awful human being was thrilling for me,” he says. “When I was in that play, I thought, ‘This is the thing I’m supposed to be doing.’”

Ally, who was named Lewis & Clark’s 2014 Outstanding Young Alumnus in February, has now been acting professionally for a decade, and has shown himself to be a thoughtful and versatile performer. He has won acclaim and a slew of awards for such disparate roles as a basketball-loving Indian-American professional wrestler; a prickly mergers-and-acquisitions lawyer; and Bagheera, the panther father figure in Disney’s The Jungle Book. 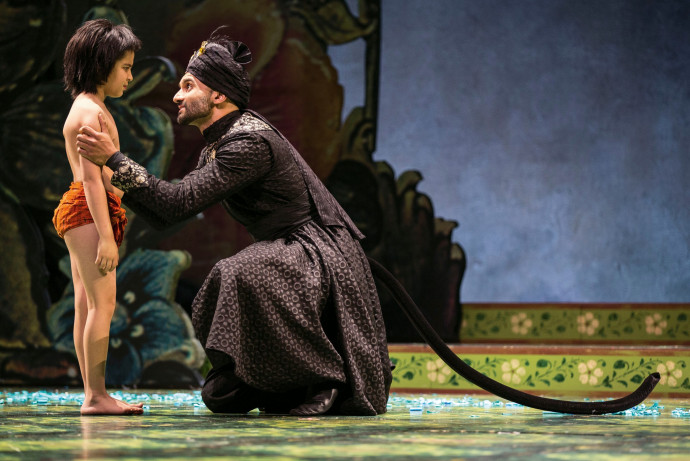 The Jungle Book at the Goodman Theatre. Playing the role of Bagheera. Photo: Liz Lauren

“Usman relishes every moment on stage,” Šimek says. “The amount of energy and presence he conveys is electrifying. You get the sense that there is nothing that he loves more than being right here and now in his role, in the particular moment on stage, in every action he takes as the character.”

Ally’s success has risen, in part, from his considerable charisma. He is tall and muscular, his scalp always shaved smooth, with a warm demeanor that softens his imposing stature. But Ally also brings sensitivity and perceptive insight to his roles, a quality he says owes much to the diversity of his academic studies: at Lewis & Clark, he majored in both theatre and sociology/anthropology.

“I think a good actor is someone who can not only access the emotional side of the character that they’re playing, but also understand and access the psychology behind an individual, the politics of an individual, the environment they grew up in, and how those sorts of things affect that character,” Ally says. “Having that background of academia in general and social theory in particular has helped me understand, when I’m playing people who are nothing like me, where they are coming from … finding the humanity.”

Ally is Pakistani, but was born in Swaziland and grew up mostly in East Africa, attending high school in Dar es Salaam, Tanzania. He learned of Lewis & Clark through his math teacher, Eileen Niedermann BS ’92, who represented the school at the International School of Tanganyika’s college fair. 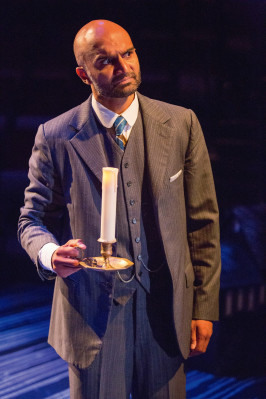 Baskerville at the Old Globe. Playing the role of Dr. Watson. Photo: Jim Cox“I told her that I wasn’t entirely sure what I wanted to do, but that I wanted to go to a liberal arts college,” Ally says. “She said, ‘You should go to my school. You’d do great.’ So I sent in an application.”

Niedermann’s recommendation and a generous financial aid package helped Ally make the decision to pack up and move to Oregon. It was his first time in the United States. Being awarded a Mary Dimond Scholarship for accomplished international students as a second-year student helped him stay.

“It was a different kind of culture shock than I think people expect,” he says. “The city was much smaller than I was accustomed to, and I wasn’t expecting all that rain.”

Ally had done some acting in high school and enjoyed the experience, so when it came time to select a professor for his first-semester Inventing America core course, he chose Stephen Weeks, associate professor of theatre. In the first week of classes, he also auditioned for the fall main stage production of Big Love, which Weeks was directing.

“He makes quite an impression in person,” Weeks says. “He’s tall, he’s handsome. And on stage, he’s terrifically charismatic.”

Ally was hooked. “When I came to college, my parents basically told me, ‘You have to become a lawyer.’ I wasn’t very good in the sciences, so becoming a doctor or an engineer like a lot of my peers seemed out of the question. The law was kind of my thing,” Ally says. “But instead, I started to take some theatre classes, and I just stuck with it.”

Weeks says Ally became “a mainstay” in the theatre department during his time at the college.

“When I directed A Winter’s Tale [in 2004], I needed a really strong Leontes,” Weeks recalls. “Usman was the only person we had that I thought could really do justice to the role and deliver both that fiery jealousy, which characterizes Leontes in the first part, and also the more chastened, humble Leontes toward the end of the play.”

While he was growing as a performer, Ally also found himself diving deeply into sociology and anthropology. He found these fields helped him explain his new experiences as a person of color in the United States.

“I was the only student in my year from the continent of Africa, so I found myself in the role of answering everyone’s questions about it, even though I’d never been outside of its southern and eastern regions,” he says. “SOAN [sociology and anthropology] was a department where I felt like I could intellectualize my feelings and attach theory to the experiences that I was having as a person of color in the United States, as a Muslim, as an international student.”

Ally’s search for ways to express the feelings of isolation he experienced as a first-year student led him to another great passion that has resonated in his professional life: a love of hip-hop and slam poetry.

“I don’t think Americans realize what a global phenomenon hip-hop is. I was surrounded by it as a child, but I wasn’t really into it at the time—I listened mainly to stuff like Nirvana,” he says. “When I came to college, because I was missing home a little and feeling nostalgic about how I grew up, I started listening to the hip-hop that I associated with friends—and suddenly it all made sense to me in a very personal, political way.”

Ally started reading about hip-hop culture and writing slam poetry. Another Lewis & Clark student, Liz Posey BA ’03, introduced him to a Portland hip-hop and slam poetry group, Prisoners of Politics; before long, he was performing with them.

By the time he graduated, Ally was certain he would pursue graduate studies in acting. He enrolled in the MFA program at the University of Florida, drawn to the school’s emphasis on diversity and African performance. While there, he founded a hip-hop theatre troupe, One Nation, the school’s first.

From Florida, Ally moved to Chicago for an internship with Lookingglass Theatre Company, and fell in love with the city. He taught theatre classes, worked phones asking for donations, and searched for auditions.

“The Chicago theatre community is amazing,” he says. “I worked constantly, learning how to be an actor, and I was also afforded the opportunity to go to a lot of other cities to do shows.” 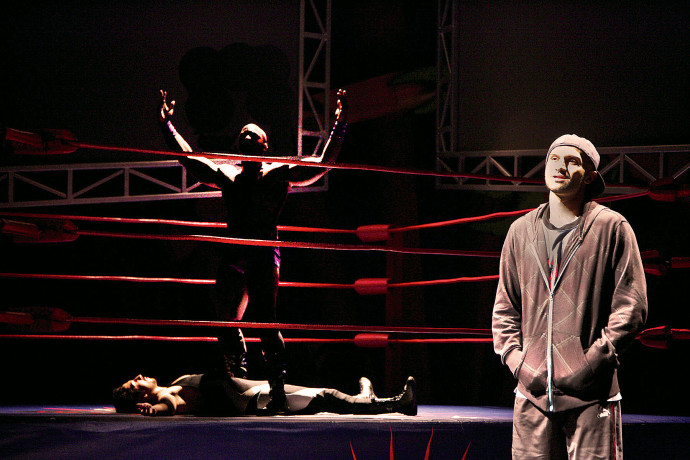 The Elaborate Entrance of Chad Deity at the Geffen Playhouse. Playing the role of Vigneshwar Paduar. Photo: Allen J Schaben

One of those shows was The Elaborate Entrance of Chad Deity, a play by Kristoffer Diaz that tackles race and ethnicity in America through the lens of television wrestling. Ally workshopped the play and performed in its 2009 Chicago premiere as Vigneshwar Paduar, an Indian-American wrestler who is cast as an Arab terrorist by his league’s producer.

Chad Deity was a hit. The play was a finalist for the 2010 Pulitzer Prize for drama, and Ally was cast in subsequent productions in Los Angeles and New York.

Those roles included Bagheera in the world premiere of director Mary Zimmerman’s adaptation of Disney’s The Jungle Book, and leads in Disgraced and The Invisible Hand, both by the Pulitzer-winning Pakistani-American playwright Ayad Akhtar. The latter performance earned Ally an Obie, the Village Voice’s awards for off-Broadway theatre.

In between acclaimed stage performances, Ally found himself doing more and more screen acting, appearing in recurring roles on cable and network dramas including Boss, Damages, and Madam Secretary, as well as smaller roles in films, including J.J. Abrams’s 2013 Star Trek Into Darkness. 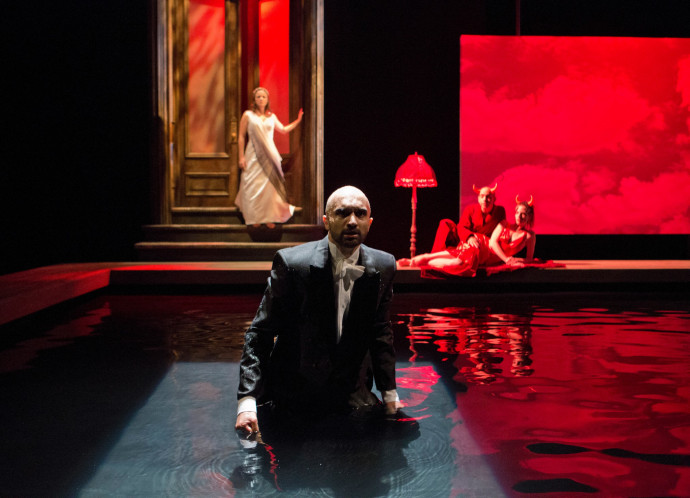 Metamorphoses at the Lookingglass Theatre Company. Playing the role of Orpheus. Photo: Liz LaurenAlthough television is less prone to dealing seriously with issues of race and privilege than the modern American stage, Ally strives to bring the political consciousness that has suffused his career to his screen work.

“If I can afford to turn down certain roles, I turn them down. If I get an offer to be the guy who is underneath the bus full of children with a bomb and then runs away, I turn it down,” he says. “But I don’t judge other people who take those roles, because there are times as an actor when you are just broke and you need the role to pay the rent.”

Recently, looking for a more stable life than that of an itinerant actor, Ally moved to Los Angeles to focus on television and film work. “I’m married and I have a dog now,” he says, by way of explanation.

Ally says he is optimistic about the direction American television is headed. “The writing on television is getting better and better because so many playwrights are writing for TV now,” he says, citing popular new dramas like Orange Is the New Black and House of Cards. 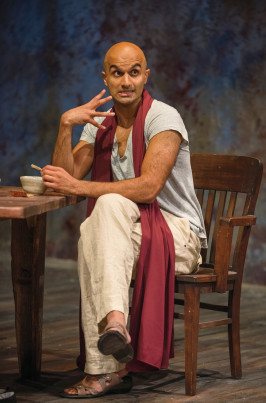 Let Me Down Easy at the American Theatre Company. Playing the role of Lauren Hutton (one of 20 characters). Photo: Michael BrosilowAlly certainly hasn’t abandoned the stage, however. Shortly after moving to Los Angeles, he returned to Chicago to play more than 20 characters, including Lance Armstrong and Eve Ensler, in Let Me Down Easy, a play by Anna Deavere Smith. He then traveled to New York to open The Invisible Hand. As of this writing, Ally was set to guest star in the pilot of an upcoming NBC drama, The Player, and was in rehearsals for the role of Dr. Watson in Baskerville, a Sherlock Holmes–inspired mystery comedy by Ken Ludwig.

“It’s a role that, as an actor of color, you think, ‘When am I going to get a chance to play that?’” Ally says. “It’s nice to have a role that has nothing to do with my ethnicity.”

Ally is also at work on his first play, loosely based on his own experiences. He’s drawing from his background working on plays in process, including Chad Deity, Disgraced, and The Invisible Hand. “Those experiences of being in the room with plays when they were just an idea has made me want to look more into my own work,” he says. “I’m learning to be not just an actor but an actor and a playwright.”