Angie Epifano ’16, a senior majoring in art history, and Katie Keith BA ’15, currently serving as a Fulbright English Language Teaching Assistant in Taiwan, were both named as double finalists for the prestigious Rhodes and Marshall Scholarships. The well known Rhodes covers two years of study at Oxford University in England, while the Marshall covers two years of study at any UK institution. To progress to the finalist stage for both awards is exceptional, and Angie has been named an alternate for the Marshall. Both awards require not only outstanding scholarship, but also distinguished leadership, noteworthy service, and compelling personal stories.

Angie’s and Katie’s contributions to academic and cocurricular life at Lewis & Clark made them standouts for nomination. Angie, a Dean’s List student who transferred to Lewis & Clark from Amherst, focuses her scholarship on the Baga tribe of Guinea, specifically how Baga women use art to validate their socio-political positions in society. Angie’s work at the intersection of African art history and gender studies opened doors for her to present at the 2015 Gender Studies Symposium as well as the 2015 African Studies Association conference. She is currently completing her thesis, tentatively titled “From Guinea to Lithuania: Art, Cultural Voids, and the Making of Nations.” Angie has also been a passionate advocate for change in how cases of sexual assault are handled on campus. President Obama appointed her to the White House Task Force on Sexual Assault on College Campuses, and in 2012, she earned a spot on the Huffington Post’s list of the 12 Most Influential People in Education. 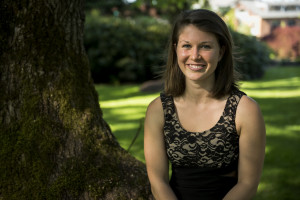 Katie Keith ’15Before graduating summa cum laude in 2015, Katie won the Rena Ratte award and was named a member of the Pamplin Society of Fellows and Phi Beta Kappa. She majored in math and Chinese, completing her honors thesis on “Optimal Control Theory with Applications in Economics.” She spent the spring semester of her junior year abroad in Beijing, where she worked to build leadership ties between the U.S. and China. Katie found numerous ways to further cross-cultural communication and understanding throughout her time at Lewis & Clark. She was one of 40 students nationwide named a Project Pengyou National Leadership Fellow, attending a four-day summit at Harvard University where she trained in cross-cultural leadership and community organizing. For another project, she established an interfaith service group that not only performed numerous critical projects around the city of Portland, but also promoted dialogue and breakdown of stereotypes among various faith groups. Of her time at Lewis & Clark, Katie notes, “The ability to develop genuinely close relationships between students and professors is probably the number one thing Lewis & Clark has that other top schools don’t.”

Angie and Katie share more than just academic distinction. Both are accomplished scholar-athletes who competed on Lewis & Clark’s track and cross-country teams. “So much of my academic success came from having such supportive, inspiring teammates and coaches behind me,” explains Katie.