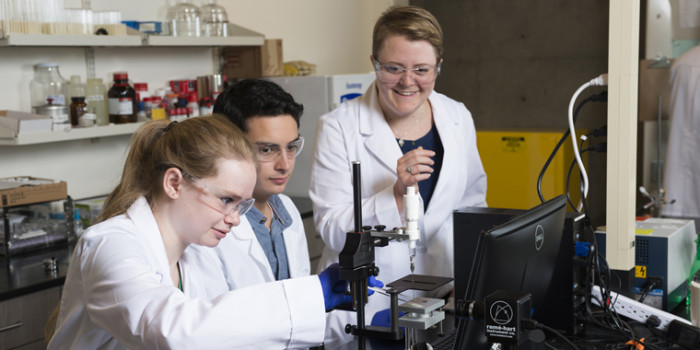 Can a compound in red wine improve heart healing? That’s the central question of the research work of Assistant Professor of Chemistry Casey Jones.

“Casey is an incredible mentor. I never left a meeting feeling stressed or discouraged. I would come to her when I was struggling, and I would always leave her office or the lab feeling 10 times better than I thought would be possible.”Kenzie Batali ’15Chemistry major

Along with a committed team of Lewis & Clark students, Jones is interested in using the compound resveratrol to help make better biomedical devices—specifically, arterial stents. These wire mesh tubes are used to fight coronary artery disease, the leading cause of death for adults in the United States. Resveratrol is a molecule found in red wine as well as berries, chocolate, peanuts, and a host of other plant-based foods.

Jones, a stellar teacher who earns raves from past and present students, became engrossed by the effort to grow cells on metal and polymer surfaces when she was doing her doctoral studies at Princeton. After Princeton, Jones landed a prestigious National Institutes of Health postdoctoral fellowship at OHSU. There she worked in a lab exploring how to improve cardiovascular devices, a line of inquiry she’s continuing at Lewis & Clark.

“The biology side of chemistry was really pulling me in,” Jones says. “I was getting the sense that, beyond just doing something really cool scientifically, chemistry and biology could work hand in hand to make something that is relevant and valuable for society.”

Last summer, four students joined Jones in her lab: Julian Harris ’16, Jacob Gigliotti ’16, Naomi Widstrom ’17, and Will Owen ’18. All of them worked in Jones’ lab with support from the John S. Rogers Science Research Program. “Working with Casey has been a great experience,” says Harris. “When I first went into her lab, I felt like a student; now I feel like a scientist. Casey taught me how to ask the right questions and how to follow my scientific intuition.”

Learn more about Casey Jones’ research in Science with Heart by Geoff Koch, originally published in The Chronicle Magazine.