When Sam Reiter BA ’15 appears on a Portland stage later this month in her original one-woman show, Baba Yaga, it’ll be the culmination of years of hard work, research, and growth. It will also be the start of a new artistic sojourn.

As reported in The Oregonian, Reiter will be performing her show at the 2016 Fertile Ground Festival. The fringe festival, which kicks off Thursday, January 21, is an annual citywide 11-day showcase of new work in the arts, with a special focus on local Portland artists. Fertile Ground features everything from world premiere projects to staged readings to developing works.

Baba Yaga is an interpretation of one of the most iconic figures in Russian folklore. The eponymous Baba Yaga, an elusive old witch, is a complicated figure—at times terrifying and other times kind and helpful. Working closely with Professor Rebecca Lingafelter, Reiter, who majored in theatre, developed the play as her senior thesis, building on the foundation she developed studying overseas at the Moscow Art Theater. 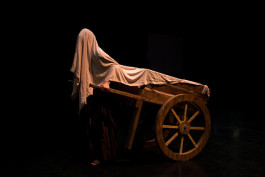 The production is an opportunity for Reiter to flex not only her artistic muscles but her entrepreneurial muscles as well. While the festival curates performances and gives new performers like Reiter more reach, it also relies on those same performers to manage the entirety of their logistical, publicity, and production needs. Reiter turned to crowdfunding, drew on lessons learned as a student employee at Lewis & Clark’s media relations office, and leaned on her friends and peers to pull it all off.

Knowing that it would take a team to deliver her one-woman show, Reiter turned to her Lewis & Clark community to bring together a band of supporters and collaborators: actor Robert Amico BA ’15; director Caitlin Fisher-Draeger BA ’12; lighting manager Corey McCarey BA ’15; and Rena Ratte Award winner Erica Terpening-Romeo BA ’14, with whom Reiter worked closely on her thesis version of the play. Her team even includes first-year student Mackenzie Bath BA ’19, who served as stage manager last semester and impressed Reiter enough to earn the role for this month’s run.

And what’s next after Fertile Ground? Reiter intends to look for more opportunities to stage performances.

“It’s always going to be a challenging project for me,” Reiter said. “Staging further performances is a great way for me to keep exploring and growing as an artist in all these different facets, as a producer and an actor and a director and a playwright.”

Baba Yaga plays from January 24 to January 28 at the Headwaters Theater in Portland. Tickets and show time information are available at www.boxofficetickets.com.