Jeff Cruttenden BA ’12 is the cofounder of Acorns, a mobile app that has reinvented investing for a new generation. 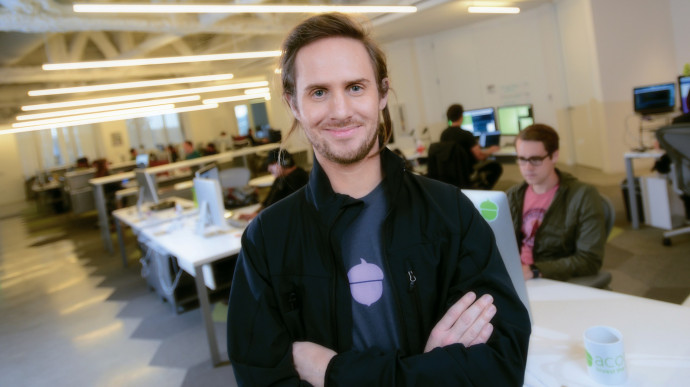 Jeff Cruttenden was 11 years old when he invested in his first stock. His father, Walter, an investment banker, set up a small account and turned him loose in front of the ticker symbols to pick a company.

Jeff scanned the long list of symbols with growing excitement. He was working his way down the column of Cs when he saw it: CHEZ, the symbol for a publicly traded cheese company. “I loved cheese,” says Jeff. He went all in.

From that day on, Jeff would race home from school to watch his account move up or down by a few pennies or dollars. Soon, his friends were hooked, too—instead of playing video games after school, everyone would run to Jeff’s to see how his company was doing. “We were all intrigued with this concept of ownership,” says Jeff. “I remember my first bike, my first piggy bank—investing felt similar, but more abstract and powerful. I had only a handful of shares, but I felt like an owner of that company—like I had a tangible stake in it.”

Jeff’s days as a CHEZ whiz were numbered—an accounting scandal eventually bankrupted the company—but the thrill of that first investment experience stayed with him. “I carried that with me into college,” he says. It was during his years at Lewis & Clark that Jeff discovered how rare it was for someone his age to have an investment account, how challenging it was for young people to start one, and how committed he was to changing that.

Today, he has reinvented investing for his generation with an app called Acorns. Named after the proverb “Mighty oaks from little acorns grow,” the app helps anyone become an investor quickly, simply, and painlessly, by rounding up their purchases and investing the change. Since its launch in August 2014, Acorns has grown steadily, cracking open the world of investing for some 1.2 million people—and counting.

Jeff arrived at his career via the scenic route. He grew up in the sunny Newport Beach community of Corona del Mar, California. In high school, he gravitated to numbers, concentrating his studies on math. After graduating, he left the palm trees behind and traveled north to Doug fir country, working for a time as a forklift operator near Seattle and spending week-ends hiking and camping.

In 2008, he moved to Minneapolis to work on Obama’s reelection campaign and began studying political science at a small liberal arts college. During a break from school, he paid a visit to a friend at Lewis & Clark. “I could not believe this was an actual college campus,” says Jeff. “Being surrounded by lush, beautiful evergreens felt like a fairy tale to me. On top of that, the professors and students I met were incredibly interesting, engaged, and passionate. To be able to study in that environment seemed almost too good to be true.”

Jeff quickly transferred to Lewis & Clark , entering as a sophomore and majoring in math. “I spent a lot of time in the college’s fabulous political science department,” he says, “but math was calling to me, and Lewis & Clark was the perfect place to dive in.” Jeff dove in deep. “He was an intensely curious student,” recalls Paul Allen, assistant professor of mathematics and Jeff’s honors thesis advisor. “He just wanted to devour as much interesting stuff as he could.”

Jeff has fond memories of long, stimulating days in the math department. “Paul would come in and start talking about something fascinating, like how mathematical relativity works, and soon he’d be pulling out slide shows and writing on the board, and we’d all start jumping in. Suddenly I’d look up and it would be 9 p.m., and we’d still be there, sitting around that table in the math lounge. It was truly an atmosphere of learning.”

“I basically lived in that department for years,” says Jeff. “That’s where Acorns really started—in the Lewis & Clark math department.”

Jeff didn’t set out with the intention to start a company. “He’s just the kind of guy who naturally wants to share his interests and passions with others,” says Allen. “He was always encouraging other students to think about finances and investing. He was sort of an evangelist for becoming involved in the markets.”

When the topic came up in conversations, says Jeff, “My classmates were blown away that I had an investment account.” Many of them wanted to invest, he learned, but didn’t think it was possible for them. They assumed that they wouldn’t have enough money to open an account, that the commissions would be too high, or that the choices would be too risky or complicated. 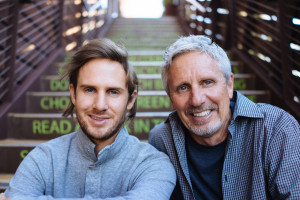 Jeff and Walter Cruttenden. Photo courtesy Acorns/David Keegan.Jeff shared these conversations with his father, which led to animated discussions between the two of them. What would it take to help young people get past these barriers to investing? Walter, an entrepreneur who had launched both his own investment banking firm and the investment banking arm of E*Trade, pointed out that technology was already starting to reduce the complexities and costs involved in trading. These changes, he felt, could lead to simpler ways for younger people to get started. As Walter tells it in an interview in Wired, “Jeff held up his smartphone and said, ‘Dad, it’s going to happen this way.’”

For mobile-centric millennials, an app would vastly improve access, technically. But there were still emotional access issues to contend with. “Investing has been built up as a really big decision,” says Jeff. “To cut through that baggage, you’d have to take that big decision and make it small.” What if an app could make investing possible on a scale so small, they wondered, that people could start with their spare change?

Soon, Jeff was pursuing the idea in earnest. “I found myself spending almost as many hours working on Acorn’s as I did on my math projects,” he says, “to the detriment of my sleep.” Jeff started sharing the idea with his professors and was bolstered by their encouragement.

“I was excited to see Jeff working on taking a part of our economy that’s not very accessible to the everyday person and making it accessible,” says Allen, “not just in financial and technical terms, but also in human terms. I think that captures Jeff perfectly—he’s passionate about these ideas, and very passionate about connecting them to people.”

In his last year at Lewis & Clark, Jeff was juggling graduate school applications, his math work, his honors thesis, and the app idea. As he headed down the home-stretch, he knew he had to make a choice. Graduate school had been a longtime dream, but the more he worked on the investment app, the more he thought, “This is important. This is something I believe in. I think this is the future.” At home during winter break, he and Walter talked every-thing over. “That’s when we decided, OK, let’s do this,” says Jeff. Partnering with his father, he incorporated Acorns on Leap Day 2012. A few weeks later, he graduated from Lewis & Clark, returned home, and got back to work.

Jeff invested the next two and a half years of his life in building the app. While Walter leveraged his expertise in navigating the regulatory and venture capital hurdles, Jeff focused on optimizing the app, from the simple, user-friendly front end that consumers would see, to the intricate back-end investment platform that the company and its broker-dealers would interact with, to the custom-designed technology that would allow all of the components to function seamlessly together for users. “It was like a complex math problem,” says Jeff. “We knew it was going to be hard. There were no shortcuts—trust me, we looked for them. But the rigors of my math major had prepared me to tackle it.” 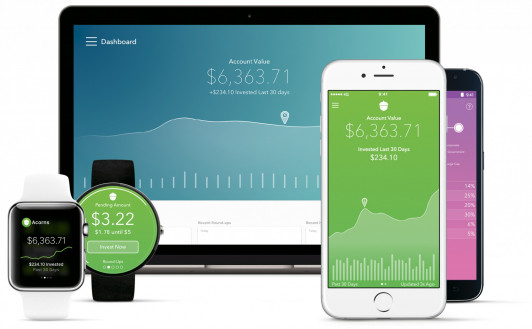 In addition to solving “the mechanical friction issues,” says Jeff, “we had to overcome that really big emotional friction. We did that by connecting investing with something people do all the time: spending.” Acorns users link their debit or credit card to their account. Then, every time they spend, the app rounds up their purchase to the nearest dollar and invests the change in a diversified portfolio. “That’s sort of our secret sauce,” says Jeff. “We make it a simple, app-appropriate decision to invest.”

If the automated round-ups are the secret sauce, then the investment portfolios, designed with the help of Nobel Prize–winning economist Harry Markowitz, may be the beef. “I was lucky enough to get connected with Dr. Markowitz while I was a senior at Lewis & Clark,” says Jeff. “I was studying modern portfolio theory under Professor Allen, and he let me put together a special independent study class with two other students to dig deeper. That actually provided some of the foundation for the work with Dr. Markowitz on our portfolios.”

Acorns offers five portfolios ranging in risk from conservative to aggressive. All five are comprised of the same six exchange-traded funds, or ETFs, in differing proportions. The configuration keeps trading costs—and user fees—extraordinarily low. The app is free, and Acorns charges no commissions. Investors pay a flat $1 per month until their balances reach $5,000, and a very competitive 0.25% per year after that. In July, the company began waiving all fees for students and everyone under 24. “We’re focused on getting people started,” says Jeff, “and we want to make that as simple as possible for them.”

As Fortune reported last April, “Acorns’ two-pronged approach to making investing approachable by automating the process and incorporating a smartphone app is paying off with younger users.” Of the more than 1.2 million people who have signed on with Acorns, three-quarters are under 35. One recently told Jeff that he signed up while standing in line at Starbucks, and completed his first round-up investment by the time he paid for his coffee—a tangible testament to the app’s simplicity.

Acorns is now one of the fastest-growing brokerage firms in history. While similar products have come along, Acorns holds the distinction of being the premier mobile-first investment app. 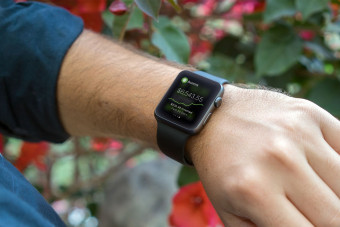 Photo courtesy Acorns/David Keegan.New platforms for Acorns wearables and desktops are on tap for the future, and Jeff plans to expand the company globally in the coming year. “In the long term, the way we interact with all financial services will be mobile,” Jeff predicts—and Acorns will be there.

Looking back, he says, “I absolutely believe that Acorns would not exist—at least not in its current form—without my experiences at Lewis & Clark. My conversations with classmates clearly informed its creation, and the rigorous education and encouragement I received from my professors were invaluable.”

Today, Jeff happily continues to invest in what he believes in. “Acorns is about creating new investors,” he says. “Not just people who have investment accounts, but people who are invested in their financial future. People who feel empowered to own something. Young people, traditionally, have waited too long to invest. I’m trying to change that perspective.”

Ellisa Valo is a freelance writer and editor based in Oregon City.