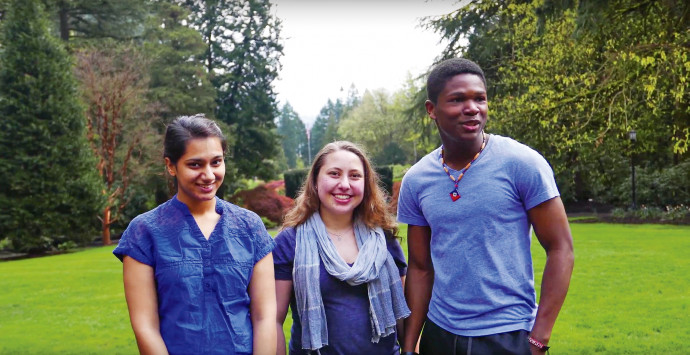 As a teenager in Port-au-Prince, Haiti, Valcourt Honore CAS ’17 attended a struggling public school with crowded classrooms and overworked teachers. But in a country where half of all children don’t attend school at all, he felt fortunate—until, that is, he encountered his private school peers.

“We were sneered at and told we wouldn’t amount to anything,” remembers Honore. “The taunting and social isolation were intense.”

Not to be discouraged, Honore excelled academically and later enrolled at Lewis & Clark. But he never gave up the idea of effecting change in his homeland. This past summer, he had his chance. Honore returned to Port-au-Prince with two Lewis & Clark friends and a purpose: to help remedy the injustice he had experienced within his community.

Honore, along with Parul Sohal CAS ’17 and Kayla Nachtsheim BA ’15, developed a computer course for Haitian teens that incorporated lessons of tolerance and unity. Each Lewis & Clark student contributed a unique skill set that strengthened the team. Honore brought economics and foreign language skills along with personal contacts; Sohal offered computer science skills and a curriculum background; and Nachtsheim had expertise in international development, program management, and conflict mediation.

The trio partnered with a local community center and provided training to its teachers. Public school students were paired with private school pupils, and together each pair shared a laptop. In addition to basic computer skills, the curriculum emphasized active listening, consensus-based decision making, and constructive peer evaluations. 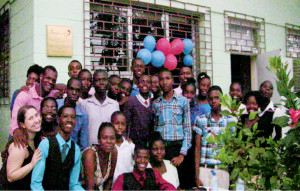 As a final celebratory event, students delivered presentations on Haitian history to the local community.“To be honest, in the beginning, it was really intense,” Honore remembers. “We wanted to break down social barriers, but the participants didn’t know that. The kids thought they were just attending a summer computer class.” The class lasted a month and culminated in a public presentation on Haitian history.

“Over time, the kids realized they really weren’t that different from one another,” says Honore. “They began to talk to each other and work together.”

But Honore recognizes that there is more work to be done. “The real change that you want to see will never happen in just a few weeks,” he says. “It will happen over time.” Fortunately, the program is poised to continue, thanks to the group’s solid curriculum as well as the donated laptops and other key supplies they left behind.

The team’s work in Haiti was funded, in part, by a $10,000 Projects for Peace grant, part of a nationally competitive program. Lewis & Clark has had a winning grant each year since the program’s inception in 2007. The team received additional funding from Lewis & Clark’s Office of the President, Lewis & Clark’s Finance Committee, and individual donors through a successful online crowdfunding campaign.