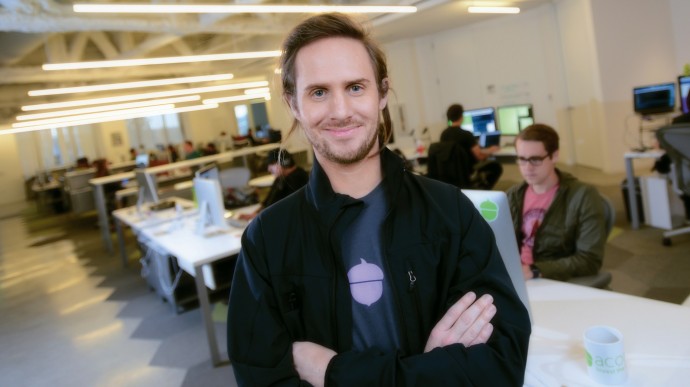 Lewis & Clark has always been committed to teaching students how to imagine—and build—a better future. With a well-rounded liberal arts education, our graduates go on to do nearly everything—including starting their own successful companies.

Jeff Cruttenden ’12 is the cofounder of Acorns, an app that rounds up the user’s debit and credit card charges and automatically invests the spare change in a diversified portfolio. Since its launch in August 2014, Acorns has grown steadily, opening the world of investing for some 1.2 million people. Three-quarters of Acorns’ users are under 35.

Jeff’s interest in finance began at age 11, when his father introduced him to the stock pages of the local newspaper and gave him a small amount of money to invest. He credits his involvement in our Department of Mathematical Sciences with giving him the tools to create the app. “I absolutely believe that Acorns would not exist—at least not in its current form—without my experiences at Lewis & Clark. My conversations with classmates clearly informed its creation, and the rigorous education and encouragement I received from my professors were invaluable.”

His goal, like the change his app invests, is small but significant: to lower the entrance barrier to investing and to encourage young people to become “invested in their financial future.”

Learn more about Jeff in “Investing in Change” by Ellisa Valo, originally published in The Chronicle Magazine. Jeff was also recently named one of Forbes Magazine’s “30 Under 30” in finance and was featured last week in The New York Times article “Apps That Make Saving as Effortless as Spending.”